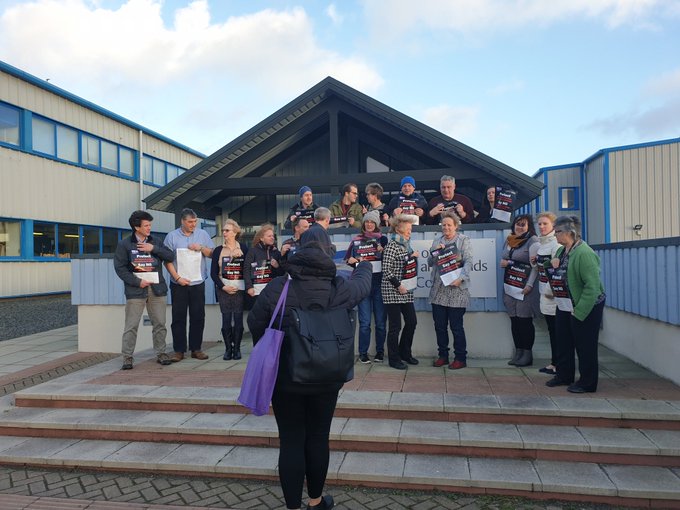 SCOTLAND’S largest education union has launched a campaign to protect the country’s most remote educational institution from being taken “out of public control”.

The Educational Institute of Scotland’s (EIS) Further Education Lecturers’ Association (FELA) has launched a petition over the amalgamation of Shetland College, Train Shetland and the North Atlantic Fisheries College (NAFC) Marine Centre together into an unincorporated company.

The union claims growing public support in the local community, for whom the three institutions represent a significant part of the local public infrastructure.

Tensions have risen between college management and the union in recent weeks. The union has been supportive of the amalgamation, but has demanded talks with college authorities and the University of the Highlands and Islands (UHI) over the plans to move the college toward the new status. Now the union has initiated public campaigning in Shetland against the move.

“With very few exceptions, Scottish colleges are democratically accountable and Shetland’s students and community deserve to be treated in the same way.” EIS petition

The petition on the EIS website reads: “We, the undersigned, call on the Scottish Government to reject the proposal that Shetland College is taken out of public control. Experience has shown that moves towards privatisation damage public services.

“With very few exceptions, Scottish colleges are democratically accountable and Shetland’s students and community deserve to be treated in the same way.

“The current proposal is for the new merged college in Shetland to become an “unincorporated” company, limited by guarantee.”

The petition goes on to make a series of claims about the consequences of the move to an unincorporated company, including that it would represent “the privatisation of tertiary education in Shetland” that it would no longer be “accountable in law to the democratically-elected Scottish Parliament”, nor “subject to reports being completed by Audit Scotland on their financial stability”, and would suffer from a loss of “Scottish Government oversight”, including the loss of the capacity of Scottish ministers to withdraw the college board of management in exceptional circumstances.

Read more: Are Scotland’s children given enough time to learn at their own pace?

EIS leader Larry Flanagan first raised public concerns in December. Quoted in the Press and Journal, he said: “While the EIS is supportive of the proposed merger, we continue to have significant concerns about suggestions that any new entity will be an unincorporated body, and therefore sit outwith the established governance arrangements for the Scottish further education sector.

“Given the importance of Shetland College to the local community, and considering the significant amount of public money involved, it is essential that appropriate scrutiny is in place.”

The shadow board overseeing the changes to the institution have also discussed the idea of bringing in private companies to provide services for the new merged institution, named the Shetland Institute.

Speaking to CommonSpace, a Scottish Government spokesperson said: “The Scottish Government has not yet received any formal business case for merger. The Scottish Funding Council is working closely with UHI and the three bodies that provide further and higher education and training in Shetland with regards to their proposed merger.”

Responding to CommonSpace questions about the to the EIS petition, a spokesperson for the UHI said: “The Ministerial Business Case to support a proposal for merger in Shetland between Shetland College, North Atlantic Fisheries College and Train Shetland is currently being developed under the leadership of a Shadow Board.

“Any proposal regarding the constitutional arrangements of the organisation to be formed will form part of that business case and will be subject to consultation with all stakeholders once produced, in line with established protocols. Our expectation would be that EIS views, alongside those of all stakeholder groups will be considered as part of that formal consultation process.”

The Scottish Liberal Democrats told CommonSpace that Beatrice Webb, the Shetlands MSP, was in communication with both the union and the college, but would not issue a statement at this time.

Highlands and Islands Labour MSP Rhoda Grant said: “I know the EIS was previously supportive of the proposed merger but the union’s new concerns are worrying.

“I will be contacting the EIS on this as I am very supportive of colleges remaining within the public sector.”