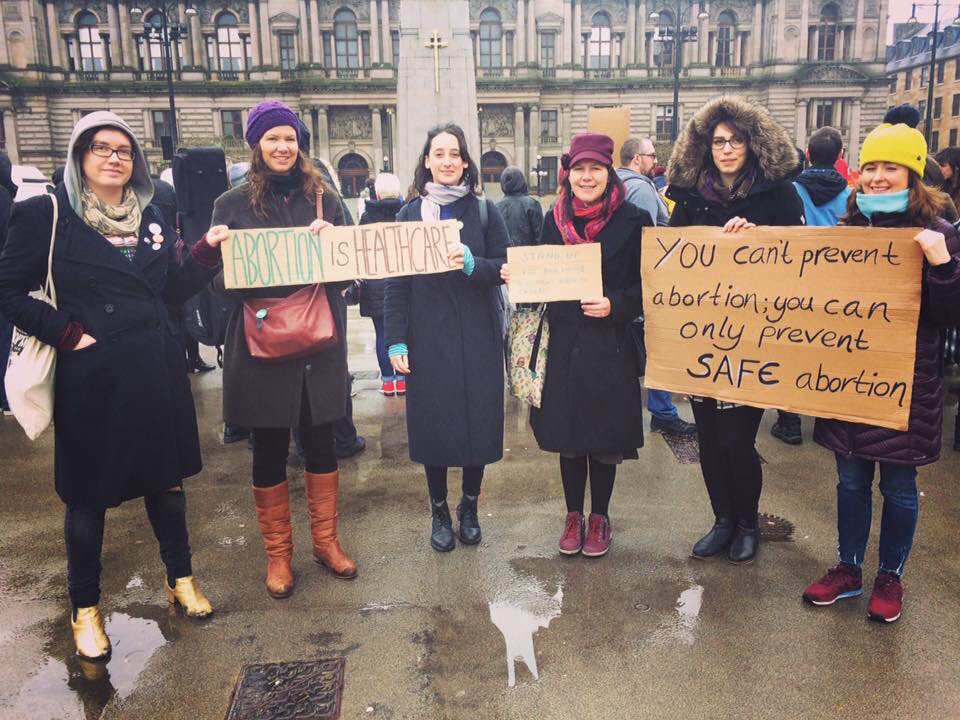 SCOTTISH GREEN PARTY members in Glasgow will take part in a counter-protest at an anti-abortion event on George Square this Sunday 25 March, hosted by 40 Days for Life, a pro-life group originating in America.

The event marks the end of the group’s 40 day ‘vigil’ for lent outside Queen Elizabeth University Hospital, in protest against the provision of abortion services at the facility – one of 12 such vigils being held by the group across the UK.

The Glasgow Green Party Women’s Network has described the demonstration as “abhorrent”, and will protest at the event to voice support for a pro-choice stance on abortion.

Jessie Duncan, a spokesperson for Glasgow Green Party’s Women’s Network, said: “In the Scottish Greens, we consider that access to abortion is a human right and all reproductive health services must be delivered on the basis that all people have the right to decide whether and how to control their own fertility.

“Decisions about whether to have children, when and how many to have should be a matter of free choice and people should be able to exercise this basic, legal right free from any form of intimidation or harassment.”

This will be the third consecutive year that 40 Days of Life has organised these activities in Scotland, and the ‘closing event’ which begins at 3pm on Sunday will hear from Austin Gaughan, a 40 Days for Life Glasgow core team member, Sister Roseann Reddy of the Sisters of the Gospel of Life, and Robert Colquhoun, the London-based international director of 40 Days for Life.

In the group’s own words, they “pray that, with God’s help, this will mark the beginning of the end of abortion in our city — and beyond”.

With groups in 25 countries and in 125 locations in the US, 40 Days for Life states: “The mission of the campaign is to bring together the body of Christ in a spirit of unity during a focused 40-day campaign of prayer, fasting, and peaceful activism, with the purpose of repentance, to seek God’s favor to turn hearts and minds from a culture of death to a culture of life, thus bringing an end to abortion.”

The British Pregnancy Advisory Service (BPAS) has reported receiving frequent reports from women who have been distressed by the group’s activities in the UK.

The Glasgow Greens cite NHS Greater Glasgow and Clyde advice on the feelings of loss, sadness, or guilt experienced by women who have abortions as evidence that the protesters have a “lack of regard for the physical, mental and emotional well-being of those involved”.

Jessie Duncan said: “We recognise that the decision whether or not to continue with a pregnancy is never undertaken lightly and is a difficult emotional time.

“In order to protect our own hard-won rights and to stand in solidarity with those who are still fighting, we must be ready to challenge the currently small but very vocal wave of anti-abortion activism.”

Highlighting the need for solidarity with women in other jurisdictions where abortion-rights are less advanced, Duncan commented: “In Scotland we are fortunate to have had access to free, safe abortion since 1967. This has meant that every generation of women after have had more control over their own health, bodies and lives.

“At the same time, women in both Northern Ireland and the Republic of Ireland must still take a flight or a ferry to access this very basic form of healthcare that should be available at home.”

A referendum on repealing the eighth amendment, which prohobits abortion in Ireland is expected to take place this summer.

Under the Abortion Act which applies to Scotland, England, and Wales, abortion is still technically illegal and classed as a criminal offence unless the procedure has been agreed by two doctors and takes place within 24 weeks of pregnancy.

Abortion law was recently devolved to the Scottish Parliament under the Scotland Act 2016, and organisations including Engender, Amnesty International in Scotland, and Abortion Rights Committee in Scotland have called for full decriminalisation.

The Glasgow Greens Women’s Network are inviting anyone who wishes to join them in George Square at 3pm on Sunday.