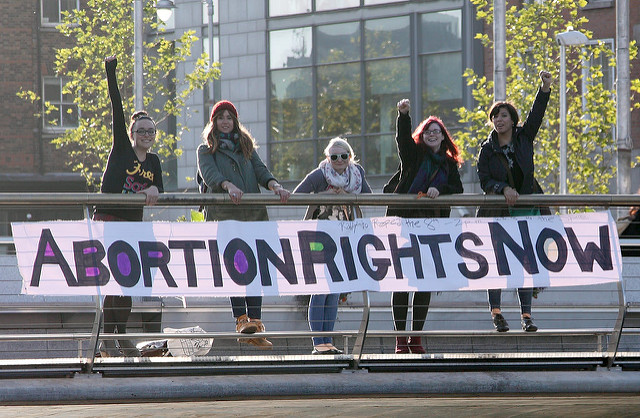 PRO-CHOICE CAMPAIGNERS in Scotland will join with others across the world in holding solidarity rallies this Saturday (30 September) in support of Ireland’s campaign repeal the eight amendment of the Irish constitution.

The eighth amendment, which was voted into the constitution by a referendum in 1983, guarantees that the laws of Ireland will respect, defend and vindicate “the right to life of the unborn”. Abortion is currently illegal in almost all circumstances in Ireland, placing the country’s abortion laws among the most restrictive in the world.

Ireland’s Abortion Rights Campaign is holding its sixth ‘March for Choice’ in Dublin on Saturday as part of the campaign to have the amendment repealed. This follows an announcement by the Irish Government last week that a referendum on the issue will be held in the summer of 2018.

The Scottish Irish Abortion Rights Campaign (SIARC), which was set up earlier this year to show solidarity, is coordinating the rallies in George Square, outside the Scottish Parliament, and in Castlegate, Aberdeen. These will be three of over 20 such solidarity rallies taking place globally, in cities including Paris, Vancouver, New York, London, Berlin and Melbourne.

READ MORE: Campaigners in Ireland and across UK unite in #RepealThe8th pro-choice protests

Zoe Blah, co-founder of SIARC, explained why the group feels it is so important for Scotland to show support for the campaign to repeal the eighth amendment. She said: “There are two elements to it. There are Irish people in many countries including Scotland who will be going back to vote.

“And it’s also about showing people in Ireland who are pro choice or thinking they might be pro choice that they have this support.”

SIARC is supporting not only the repeal of the eighth amendment in the Republic of Ireland, but also decriminalising abortion in Northern Ireland. Blah said: “Anyone pregnant in the island of Ireland faces a dangerous lack of healthcare choices.

“We are lucky to be living in Scotland where our reproductive rights are far greater than those of women living on the island of Ireland”.

She added: “We encourage the people of Scotland to show all women from the island of Ireland that they stand in support of these rights.”

The Scottish Government has committed to funding abortions for Northern Irish women within the NHS in Scotland, while the UK government made a similar commitment following an amendment proposed by Labour MP Stella Creasy.

“We need to get the referendum wording right, so that it’s about a full repeal of the amendment.” Zoe Blah, SIARC

At present, the cost to women travelling from Northern Ireland and the Republic of Ireland to the rest of Britain for an abortion is considerable, posing barriers and risks to those who wish to do so.

SIARC is calling on the Scottish Government and all Scottish political parties to “make a firm commitment to support women’s right to choice across the entire island of Ireland”.

Blah explained why the need for international support for the campaign is more pressing than ever: “We formed as a group earlier this year around the same time as many, many groups across the world.

“As Ireland is moving towards a referendum, we felt it was important to get involved and to keep the pressure on.”

There is still considerable work to be done in ensuring that the referendum provides the opportunity for real and positive change, Blah explained. She said: “The actual wording of what the people of Ireland are going to be asked is very much up in the air.

“The Repeal the Eighth Coalition has been clear in saying we need to get the referendum wording right, so that it’s about a full repeal of the amendment.”