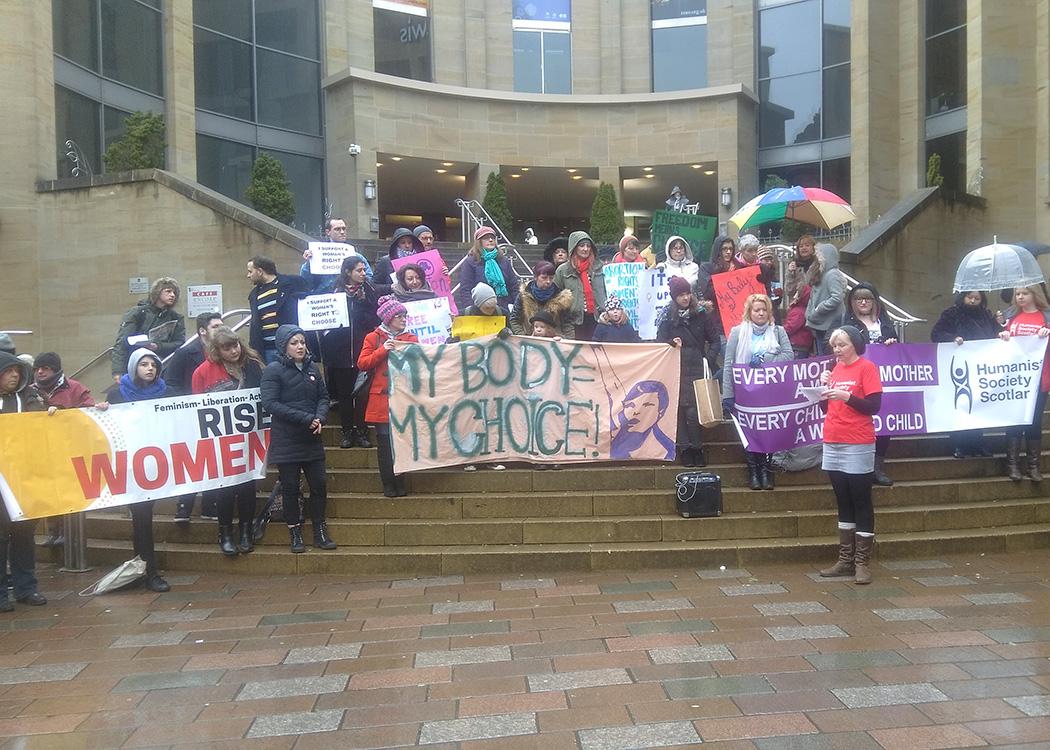 A RALLY in support of women’s abortion rights on Saturday (13 February), has demanded that there be no restrictions on women’s access to abortion.

The demonstration was initially called as a display of opposition to an anti-abortion rights group, ’40 days for life’, who threatened to bring US style picketing of abortion facilities to Scotland.

But the feminist campaigners, including the Rise electoral alliance’s Women’s Network and the Scottish Humanist Society also used the occasion to resist any calls for the reduction in the time limit within which women can legally have an abortion.

In her speech at the rally, Cat Boyd, a Rise candidate for the Glasgow region in May’s Scottish elections, said that the right of women to access abortion was “not up for discussion”.

“We are not going back to the days when abortion was illegal and women were forced to endure dangerous backstreet abortions.” Cat Boyd

She said: “We are not going back to the days when abortion was illegal and women were forced to endure dangerous backstreet abortions. We will not allow any scaling back of the time limit for abortions. Our rights are not up for discussion.”

Last November it was confirmed that control over abortion will be devolved to the Scottish Parliament as part of the Scotland Bill 2015.

Margaret Binns of the women’s network told CommonSpace that any reductions in the right of access to abortion was detrimental to women: “I do not believe there is any need to reduce the current time limit for abortions. Any tightening in current legislation will further reduce a woman’s rights and take us back to a time of backstreet abortions.”

She added that women in Scotland would continue to protest publicly for their rights: “Women coming together and protesting not only highlights the strength of feeling on these issues but also that we will not stand for an attack on women’s rights. We showed the previous week [against the Roosh V gathering] the impact a public show of unity can have. We have strength when we stand together.”

The rally took place a week after George Square was the scene of a jubilant feminist celebration after a misogynist gathering was cancelled.

“We are here to speak for a majority, so that women continue to have a voice in Scotland.” Claire Digance, Humanist Society

Claire Digance of Humanist Society Scotland told CommonSpace that they were attending the rally in order to speak for a majority in support of abortion rights.

Asked if she was concerned about interest groups attempting to exert influence on Scottish law makers to reduce abortion access she said: “There may well be people like that, but we are here to speak for a majority, so that women continue to have a voice in Scotland.”

“We are here to show our right for Scottish women’s right to choose.”

Under UK law abortion is still technically illegal. On 9 February The British Pregnancy Advisory Service (BPAS) launched their campaign, called ‘We Trust Women’, for the full legalisation of abortion.