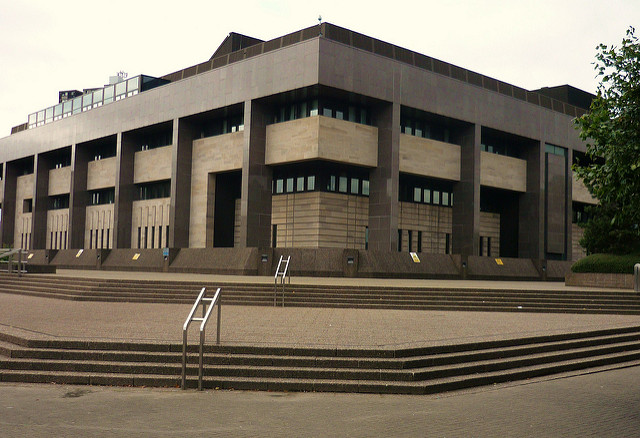 A RACISM CHARGE against a member of the Scottish Palestine Solidarity Campaign (SPSC) was dropped at Glasgow Sheriff Court earlier this month following a long running case relating to a protest at Braehead shopping centre.

Mick Napier was arrested alongside fellow campaigner Jim Watson in September 2014, after demonstrating at the Glasgow complex where Israeli cosmetics company Jericho is based. Facing three charges, Napier and Watson were cleared of the more serious racism charge but convicted of lesser offences related to trespass.

Napier believes Jericho extracts products from around the Dead Sea “illegally” from Palestinian territories and supports what he alleges to be the genocidal treatment of Palestinians on the West Bank. He told Common Space he will continue to highlight the plight of Palestine through demonstrations. The protest was held after Israel’s 2014 offensive against Palestine.

Napier said: “I’m pretty chuffed, that’s the most recent of many in our favour. It’s looking good. The Zionists got the consolation prize on Friday. They got a conviction for [me] refusing to leave when asked by the police, and aggravated trespass, which means carrying a placard in a shopping mall really.

“We’re going to appeal that but to be honest with you, from us, the racism charge was 99 per cent of the whole thing. Had they got a conviction on that they would have been cock-a-hoop.” Mick Napier

Napier was particularly happy as this was the third time he has avoided conviction. In one trial, he was cleared after using evidence from Al Jazeera, which had been filming a demonstration. Napier said: “At one time I had three different trials on the go at the same time.

“In the Kilmarnock one the sheriff said no case to answer and that was only because Al Jazeera had been following us around and filming everything. But that sinister effort to get a conviction actually failed because of the video evidence.”

However, reports in the Jewish News Online quoted a spokesman from Jewish Human Rights Watch who welcomed the conviction Napier recieved. In addition, a social media page called Glasgow Friends of Israel posted a picture of Napier with the word “guilty” embedded on it.

A spokesman from Glasgow Friends of Israel said: “All fair minded people who support justice welcome the conviction of the SPSC’s Mick Napier on two charges of aggravated trespass and refusing to leave the Braehead shopping centre as instructed by the police.

“Unlike the SPSC, the Glasgow Friends of Israel will continue to support peace for both the Israeli and Palestinian people. We endeavour to find a pro-Palestinian organisation in Scotland who will work with us to achieve this objective as pursuing peace for only one side is a false dream.”

Journalist and commentator Yvonne Ridley, who covered the story for Middle East Monitor, told CommonSpace it was “a significant victory which clarifies the position for a lot of people who want to stand up to Zionism without the fear of being called racist and anti-Semitic.”