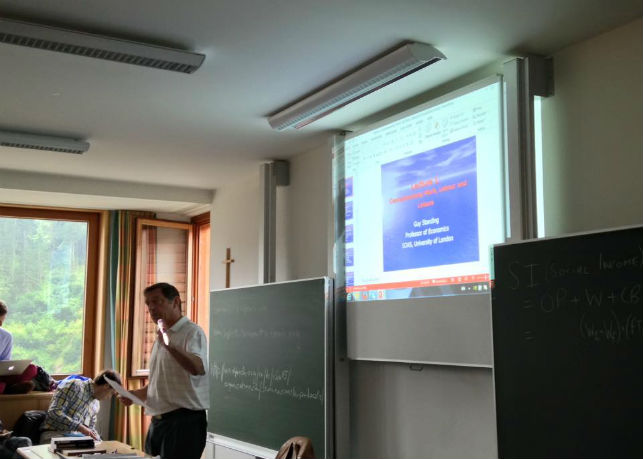 THE INFLUENTIAL academic and economic theorist Guy Standing is set to deliver a lecture in Edinburgh on the application of a basic income in Scotland.

The professor of development studies at the School of Oriental and African Studies (SOAS), will discuss the potential benefits of a basic income paid to all citizens regardless of their employment status for the Arthur Millar Lecture at the Royal Scottish Academy (RSA) in Edinburgh on Tuesday 17 May.

Speaking ahead of the event, Jamie Cooke head of RSA Scotland told CommonSpace: “We are delighted that Professor Standing has agreed to deliver the Angus Millar Lecture.  His work on basic income and the precariat is world leading, and will be a very timely contribution to the development of this topic in Scotland.

“With interest in basic income/citizens income higher than it has ever been, we have an ideal opportunity in Scotland to explore these ideas in more depth and to test them out in practice.”

“Combining both equality and freedom it is a policy that could transform all our lives and enjoys support from all parts of the political spectrum.” Willie Sullivan, Citizens Basic Income Network Scotland

The basic or citizens income is a policy designed to create economic security in an era expected to be increasingly defined by ageing populations, automation and rising structural unemployment by providing all citizens with a basic payment regardless of their employment status. The payment would replace much of the existing welfare state and, in theory, eliminate the worst forms of absolute poverty. Critics question whether the policy would be affordable.

Standing is the author of the popular book documenting the rise of precarious working conditions ‘Precariat: The new dangerous class?’, and is a founder member and honorary co-president of the Basic Income Earth Network (BIEN).

Willie Sullivan, chair of Citizens Basic Income Network Scotland (CBINS), told CommonSpace: “As work becomes automated, wealth ever more concentrated and our welfare system creaks at the seams, a citizens income is rising up the political agenda. Combining both equality and freedom it is a policy that could transform all our lives and enjoys support from all parts of the political spectrum.”

The RSA will open its doors for the lecture at 6pm, with the lecture starting a 6:35pm. Tickets can be purchased here.

The lecture will be live-streamed at the RSA’s website on the night here.