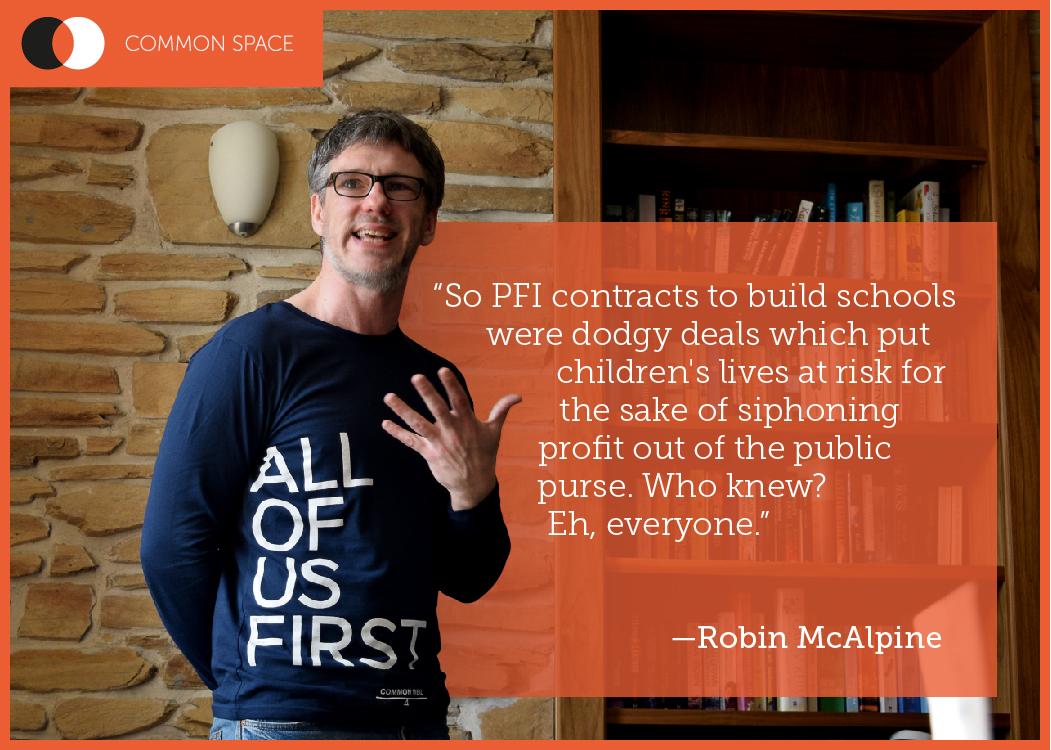 CommonSpace columnist and Common Weal director Robin McAlpine argues that the Edinburgh schools PFI scandal is part of a wider picture of corruption, corporate influence and rampant privatisation in the UK – and everybody saw it coming

SO PFI CONTRACTS to build schools were dodgy deals which put children’s lives at risk for the sake of siphoning profit out of the public purse and into the greedy hands of bankers, equity investors and opaque shell companies. Who knew?

Eh, everyone. In 2000 I commissioned and edited a whole series of articles analysing the corrupt nature of Gordon Brown’s Big PFI Carnival. They clearly predicted all of this – the secret backroom deals (or ‘commercial confidentiality’ as it’s practitioners laughingly call it), the cutting of corners and the incentive to build badly (known as ‘market efficiency’), the certainty that the financiers would never be held responsible for anything (referred to, almost sarcastically, as ‘risk-sharing’), the insane, unjustifiably enormous cost to the public (they didn’t have a word for that, they just hoped we’d all go away).

Yesterday the Scotsman complained that the aftermath of ten-year-old schools falling down is descending into a “blame game” (which seems ironic since ‘descending into a blame game’ seems to be the Scotsman’s editorial strategy these days). So it bloody well should. If a child had been killed by this, the blame game should have descended all the way to court where executives should have been facing jail for corporate manslaughter.

This all stinks. Children could have died. It was all foreseeable 16 years ago.

It asks who is caring about the wellbeing of the children in all this. Not the Scotsman which at the time this was all happening was in it’s Andrew Neil phase of glorying in anything that made Edinburgh financiers rich. I recall no mention of the wellbeing of children. The Labour-supporting bits of the Scottish press weren’t all that much more sceptical.

There just isn’t space here to outline the layer after layer of profiteering involved – when you start to get into the question of ‘refinancing deals’ (where the whole contract is immediately sold on in very dodgy ways for massive immediate gain, all at the public expense), your head starts to hurt .

Taking money for public services and infrastructure and perverting it to make it a source of great wealth for the very few often looks like it has become the defining purpose of Government.

And the only thing I can say in support of the then Labour and Lib Dem Scottish Executive is that there was nothing they could do about it. It was their only option. Because Gordon Brown made absolutely sure that it really was the only legal option the Scottish Parliament had for building schools and hospitals.

Somehow I doubt this is one of those occasions on which the Big Clunking Fist is going to be rolled out to ‘save’ something or someone. He’ll just file ‘falling down schools’ along with ‘massive banking collapse’ as issues for which he’s never had to properly answer.

So everything that is now happening was exactly what PFI’s critics said would happen. And not in that vague ‘something bad will happen’ way of which the left is sometimes guilty. Line-by-line, detailed, careful analysis that predicted all of this extensively.

Ignored. All ignored. The rich were getting richer and the free market ideologues who then and now dominate British politics were living out their wildest fantasies. It’s not that questions weren’t asked; they knew precisely what they were doing.

RBS, Bank of Scotland and their entire system of hangers-on were right at the heart of this.

But it’s not just the callous disinterest in whether cheap schools (which could have been built out of pure Roman marble for the insane price we paid for them) would kill children or not. It’s so much more.

It’s privatisation deals which everyone knew were selling off public assets for stupidly low prices to make massive amounts of money for financiers. It’s the virtual private monopolies these represented (OK, some of them aren’t monopolies; they’re cartels).

It’s the removal of sensible regulation on the banking sector to allow massive riches to be accumulated on the back of major risk to the public. It’s the appalling practice of letting big ( and measurably dishonest ) accountancy firms place staff in the government departments that write tax policy, fill it with loopholes and then return to their employer to get rich helping rich clients evade tax.

It’s the endless refusal to do anything about ‘transfer pricing’ tricks which let big corporations avoid paying corporation tax. The blind eye turned to all of Britain’s ‘tax havens’ (the wild west of Western civilisation where laws don’t seem to apply to the powerful).

The Scottish Government is surrounded by former insiders who are working full time to make sure that the next era of financial scandal is given the green light.

It’s that the head of HMRC used to be a leading advocate for not closing tax avoidance loopholes when he was a senior partner in the company that helped David Cameron’s family avoid tax using tax havens .

It’s the fact that even off the top of my head and without googling ‘Britain’ in combination with ‘scandal’ or ‘corruption’ I could keep this going for page after page. Serco alone could fill quite a few – and yet still it is given contract after contract basically to run Britain as a narrow business interest.

So when can we use the word ‘corrupt’ properly in relation to Britain? Many already are . The ability of the rich and powerful of this island state to pretend that they were working in the public interest has been eroded by revelation after revelation, scandal after scandal.

The Scottish Government should include a full ‘Profiteering Audit’ on all its legislation and decisions: a clear report setting out who stands to benefit financially from each of its actions.

If you are feeling comfortable that you live in Scotland, I’d suggest you may wish to start feeling uncomfortable. RBS, Bank of Scotland and their entire system of hangers-on were right at the heart of this.

I was involved in a report that showed just how much privileged access the wealthy have to Holyrood in comparison to people on average incomes . That hasn’t changed. Reviews into reform of planning and possible cuts to Air Passenger Duty (both policy areas that could hand great wealth to vested interests) are dominated by people who you may well feel have a commercial vested interest.

Common Weal Board Member and leading architect Malcolm Fraser has pointed out that what the Scottish Government replaced PFI with isn’t all that much better .

It’s not that questions weren’t asked; they knew precisely what they were doing.

People will respond that commercial interests, big business and so on all have a legitimate interest in public policy. They will say that there is ‘expertise’ there that the public must draw on. This line has been forced down our throats for decades now.

So explain how that commercial advice so woefully underpriced the Royal Mail, couldn’t build a school that stays up despite demanding a king’s ransom, sold you fake pensions, doesn’t pick up patients in ambulances it is paid to pick up , turns care homes for the elderly into vulture capital initiatives.

There is one thread that links all of this, every bit of it. There is not a single case which I have mentioned in this entire article which does not fall under the banner of ‘profiteering’. Taking money for public services and infrastructure and perverting it to make it a source of great wealth for the very few often looks like it has become the defining purpose of Government.

If a child had been killed by this, the blame game should have descended all the way to court where executives should have been facing jail for corporate manslaughter.

Not withstanding the examples I give above, the Scottish Government (and its predecessors) have been much better than the worst of the practice. It has fought back against outsourcing and privatisation and has tried to pursue major projects like new Forth crossing and Southern General Hospital in the purely public sector.

But it is now surrounded by former insiders who are working full time to make sure that the next era of financial scandal is given the green light – fracking comes to mind, or lucrative and unnecessary deals which will hand another generation of renewable energy and social housing over to foreign multinationals. The fact that even the Tories think that cutting APD is a corporate gift too far should cause alarm bells to ring.

Everything that is now happening was exactly what PFI’s critics said would happen.

Under substantial pressure from Common Weal and others, the Scottish Government did give some decent concessions on the Lobbying Bill. But not enough. I think it should send out a very clear message that it will not condone corporate capture and profiteering. I suggest it can do this in three ways.

First, it should get on with work on a much stronger lobbying and transparency bill, making clear to all who is spending the big money trying to get government to do its bidding.

Second, I think it should include a full ‘Profiteering Audit’ on all its legislation and decisions. A clear report setting out who stands to benefit financially from each of its actions, by how much and after how much influence over the process will clarify minds.

And third, it needs to take seriously participatory democracy. There are much better ways to develop public policy than by letting a dozen vested interests get into a room and stitch things up between them .

This all stinks. Children could have died. It was all foreseeable 16 years ago. It is time politicians started foreseeing the next obvious scandal – and that they did something about it now.