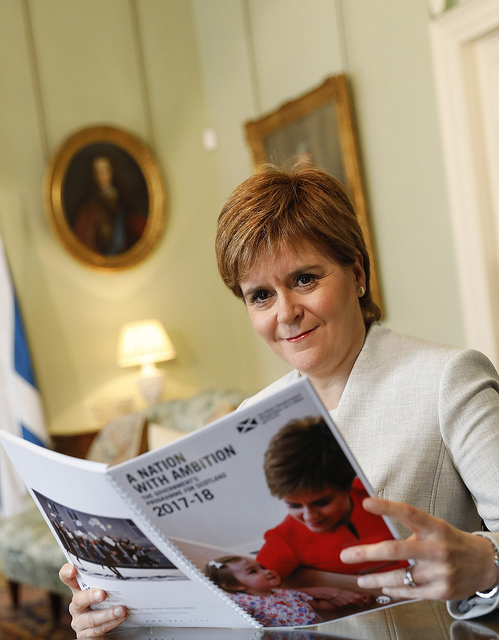 Nicola Sturgeon has announced the new Programme for Government, calling it “the most ambitious plan ever to be brought forward by this government”

FIRST MINISTER Nicola Sturgeon has presented the new Programme for Government to the Scottish Parliament, confirming several of the anticipated, high-profile policies on education and the economy discussed over the past week.

Published under the heading ‘A Nation with Ambition’ and previously described by the Scottish Government as “our plan to shape the kind of Scotland we seek – an inclusive, fair, prosperous, innovative country, ready and willing to embrace the future”, the Programme for Government was in part a confirmation of a raft of initiatives and reforms either already announced or already underway, such as next year’s new Education Bill and an end of the one per cent pay cap for public sector workers.

After 10 years in power, Sturgeon defended the SNP’s accomplishments in her introduction, arguing: “In the last decade, we have achieved many things. We have developed our economy, protected jobs and businesses and made record investments in public services. We have expanded free early learning and childcare, abolished prescription charges, kept access to university free of tuition fees, confronted climate change head-on and transformed our infrastructure. We have fashioned Scotland as a modern and outward-looking place.”

“The Scottish Government will continue to make the case for remaining in the single market and customs union. We will take whatever steps we can to protect our economy from the damage Brexit will do.” First Minister Nicola Sturgeon

Outlining the Scottish Government’s policy vision for the future, Sturgeon did however acknowledge that “Brexit will continue to provide the backdrop to much that we do over the next year”.

“The Scottish Government will continue to make the case for remaining in the single market and customs union,” she added. “We will take whatever steps we can to protect our economy from the damage Brexit will do. But, Brexit poses a threat to more than just our economy. It is also a threat to our rights as citizens.”

She also reiterated her pledge that the Scottish Government will attempt to protect the Scottish Parliament “by resisting any attempt at a power grab by the UK Government” over powers returning to Scotland and the UK from the European Union.

Below, CommonSpace takes you through some of the most notable policy announcements from the new programme.

Over the next year, the Scottish Government will set out a series of evidence-based discussion papers making the case for the extending the powers of the Scottish parliament on matters of immigration, social security, employment and trade.

Arguing that the proposals set forward by the UK Government in the EU (Withdrawl) Bill would further centralise power with Whitehall and Westminster, instead of returning it to the UK’s devolved legislatures, the Scottish Government “cannot recommend that the Scottish Parliament consents to the Bill in its current form as it contains an unacceptable and impractical constraint on the devolved competence of our Parliament. It intends to replace EU law with unilateral decision-making at Westminster.”

Sturgeon confirmed the already widely reported decision to end the public sector pay cap, a move already welcomed by campaign groups and trade unions, some of whom have nevertheless argued the move does not go far enough, and should not be delayed until next year.

The Scottish Government will work with councils to fund research into “the concept and feasibility of a citizen’s basic income.” The SNP MP Ronnie Cowan, who obtained the first ever Westminster debate on the subject of CBI, responded to the announcement that he was “delighted” and urged the UK Government to follow the Scottish Government’s lead. Calls for a Citizen’s Basic Income or a Universal Basic Income have recently been made by both the Scottish Greens’ co-convenor Patrick Harvie, and the Common Weal think tank, who recommended UBI as part of an independent Scotland’s social security system in a policy paper last month.

In response to the Paris Agreement on climate change, new targets will be set by the Scottish Government to reduce greenhouse gas emissions. The Programme argues that the bill will “increase transparency, demonstrate our commitment to sustainable economic growth and signal to the international community that Scotland is the place to do low carbon business.

The Scottish Government’s 2018 Education Bill will, it promises, “deliver radical changes and give head teachers new powers, influence and responsibilities.” This follows on from the raft of reforms detailed by John Swinney in June, which have since been criticised by COSLA as a means of centralising power that will remove democratic accountability in Scottish education. It will also include a progression of the Scottish Government’s policy of standardised testing.

The Scottish Government’s efforts to combat homelessness in Scotland will include a newly-formed expert group to examine the issue, and a £50 million ‘End Homelessness Together’ fund, which over a five year period will support various pilot solutions and anti-homelessness initiative.

Following directly from this week’s cross-party demand that the Scottish Government do more to address the 748,000 individuals and families in Scotland who live in fuel poverty – i.e. spending more than 10 per cent of their income on heating bills – the Scottish Government will set new targets on tackling fuel poverty and improving energy efficiency as part of its long-term Fuel Poverty Strategy.

A new National Investment Bank will be established “to support infrastructure investment, help companies grow and support our economic vision”, with work led by Benny Higgins of the Tesco Bank.

‘Frank’s Law’ will be instituted, providing free personal care to those under 65 who require it.

Sturgeon confirmed that ‘Frank’s Law’ – named for footballer Frank Kopel, who was diagnosed with dementia in his early 50s – will be instituted, providing free personal care to those under 65 who require it.

Working with the TIE campaign

The Scottish Government has confirmed it will continue to work with the TIE campaign to provide LGBTI-inclusive education and tackle LGBTI bullying in schools.

The Scottish Government will extend early learning and childcare provision to 1,140 hours for all 3 and 4 year olds and eligible 2 years olds from August 2020, almost doubling it.

The Scottish Government has announced a new target to phase out the need for new petrol and diesel cars and vans by 2032. In response to this, WWF’s Acting Head of Policy Gina Hanrahan said: ““With transport the single biggest contributor to climate change in Scotland, we’re delighted the First Minister has heeded the call of thousands of people across Scotland to cut pollution from our cars. Decarbonising our transport sector in fifteen years will create new jobs, cut emissions and clean up our polluted air.”