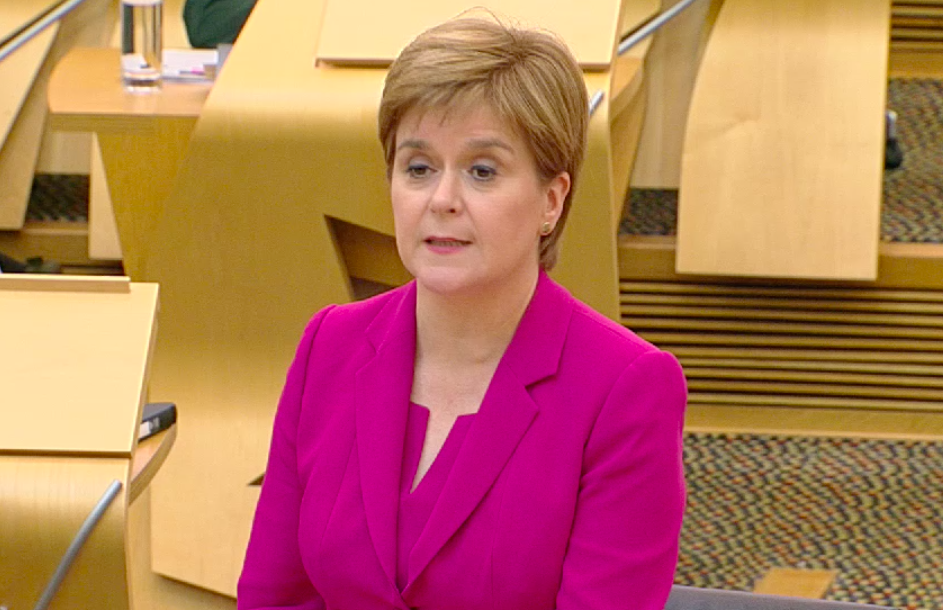 CommonSpace rounds up reaction to Nicola Sturgeon’s 2019 Programme for Government, which was dominated by proposals to lower carbon emissions

NICOLA STURGEON’S 2019 Programme for Government was dominated by the Climate Emergency.

Sturgeon, who proposed 14 bills all in all and said the plan “lay the foundations for a new Scottish Green Deal”, made the case for £500 million of new funding for bus infrastructure, a £3 billion ‘Green Investment Portfolio’ and Scotland’s railways decarbonised by 2035.

“Imitation is the sincerest form of flattery after all, and a week after we launched our Scottish Green New Deal, it is gratifying to see the First Minister adopt our language.

“I am obviously pleased that, six months after she declared one, the First Minister has recognised that the climate emergency requires more than just ambitious targets, and I welcome the commitment to introduce the Good Food Nation Bill, at last. But this programme for government is a cheap imitation of ours. Her version lacks the ambition, scale and courage required of an emergency response.

“We welcome her adoption of the idea that the Scottish Investment Bank should prioritise the climate emergency, but the funding is limited. This is not system change.

“The Scottish Government also seem infatuated with consumer choice and unproven technologies that apparently promise a quick fix – Carbon capture and storage, electric aeroplanes and hydrogen trains – yet the technology we need to solve the climate crisis is already here.

“The response to the climate emergency cannot be piecemeal. It must mobilise the economy behind a just transition, one that creates jobs, gets Scotland moving and gives people warm homes. It must harness the power of the public sector to align in one direction – providing a future for all of us.

“Scotland needs a Scottish Green New Deal which recognises the purpose, scale and bravery required of an emergency response. Building a future for all requires us to be bolder.”

“It’s great to see climate take centre stage in today’s Programme for Government and the Scottish Government’s economic and social strategy. This Programme for Government shows real leadership on the climate emergency, with the kind of ambitious and serious actions needed in response to the climate crisis.  If carried through, these commitments will slash emissions and deliver benefits to people and the Scottish environment now and for years to come. At a time when all eyes are likely to turn to Scotland ahead of UN Climate talks in Glasgow, it’s vital we implement and build on these policies in the next Budget and Climate Plan.”

“We welcome and are heartened by the broad package of measures in response to the climate emergency which were announced today in the Programme for Government. These are the bold and transformational policies, spanning sectors from transport, agriculture, buildings to procurement, that are needed to show we are serious about addressing the climate emergency. An emergency requires an emergency response.”

“This package includes some very welcome commitments but is not nearly enough to address the desperate climate emergency the world is facing. The obvious contradiction at the heart of this Programme is its commitment to some new measures in transport, heating and agriculture while continuing to back the offshore oil and gas industry to keep on drilling and destroying our climate.

“The Climate Emergency should signal a radical change of direction, especially when it comes to planning the end of oil and gas extraction from the North Sea. Instead we heard of an increased focus on Carbon Capture and Storage and hydrogen, both dangerous distractions, which risk prolonging that industry and taking the focus away from real, sustainable solutions to the climate crisis.

“It is of deep concern that the Scottish Government still thinks that repeating old announcements and setting targets for the distant future is an adequate response to the climate crisis.

The only commitment to new investment contained in this announcement is money for hydrogen busses over an unspecified period of time. Hydrolysis plants, major electric vehicle recharging infrastructure, decarbonising heating and the many, many more essential actions we need to take now have moved forward not one bit after today’s announcement.

But most difficult for many to swallow is that the primary strategy here seems effectively to be to privatise Scotland’s response to climate change by packaging it up as a series of ‘investment opportunities’ for foreign wealth funds. Rather than taking climate change head-on by developing our nation’s resources ourselves, the plan seems to be to auction them off.

It is impossible not to be dismayed by this combination of inaction and free-market dogma, neither of which is what this country needs.”

“The programme for government is understandably focussed on Brexit, the climate emergency and the need to tackle poverty and inequality. These are the right priorities and there is much in the Programme for Government to commend. Ambitious targets and increased investment to deliver a just transition to a low carbon economy alongside measures to tackle poverty and inequality are welcome.

“If Scotland is to ‘design, develop and manufacture the key innovations of the future’, as the First Minister stated, then we need more than targets. The current market approach to decarbonisation has failed. To be worthy of the name of a Green New Deal, there is a need to consider the role of publicly owned energy, transport and construction companies – something the programme for Government had very little to say on.

“We welcome the announcement on the bringing forward of the date for the first Scottish Child Payments to Christmas 2020.  Tackling poverty and inequality will be major campaign theme for the STUC over the coming years. We will require significant and sustained intervention at both UK and Scottish government levels to address these issues.

“We also hope the Scottish Government will give serious consideration to introducing rent caps as highlighted by Labour leader Richard Leonard during the debate.”

“It is very welcome news that the cap on the care experienced bursary has been removed, ensuring that some of the most disadvantaged students throughout Scotland are able to access further or higher education. All credit must go to our care experienced students for their relentless and inspiring campaigning. We look forward to further information going forward.

“We welcome the Scottish Government’s ongoing commitment to move towards a system where every student receives support tied to the Real Living Wage – as recommended by the Student Support Review almost two years ago – and the initial steps that have been taken. But, we’re yet to see a clear plan of how and when this ambition will be achieved in full. Meanwhile, student support continues to be eroded by the cost-of-living.

“We look forward to working with partners across the education sector to realise the potential of all students in Scotland, including increasing bursaries, student support and a continuing to call for a fully funded sector.”

“In light of a chorus of public and parliamentary support for a bill, we are pleased to see the Scottish Government has reaffirmed its promise to bring forward Good Food Nation legislation this coming year.

“Scotland is facing unprecedented levels of food insecurity, a biodiversity and climate crisis, and the highest rates of obesity in Europe.

“The statistics are sobering. On food insecurity, Scotland has seen a surge in demand for food banks; a record 170,000 emergency parcels were handed in 2017.

“In the meantime, the Scottish farmers producing our food are struggling to make ends meet. A 2018 Scottish Government survey of Farm Business Income revealed that 60% of the farms surveyed were making a loss without EU subsidy support.

“On health, we know that in 2017, 65% of Scottish adults are overweight with a significant proportion being obese. Whilst 13% of children were at risk of obesity.

“On food waste, in 2019 so far, an estimated 987,890 tonnes of food and drink was wasted in Scotland – with much of this going to landfill and harming our environment through methane production.

“These challenges are all connected – they reflect different aspects of a single food system. Whether that is about health, workers’ rights, economic development or environmental protection, Scotland has an exciting opportunity to be world leading by developing holistic, joined up, cross-ministerial policies and regulation around food.

That is why the Scottish Food Coalition are pleased to see this commitment to legislation in the Programme for Government, and look forward to working with the Scottish Government to secure a bill that tackles the whole food system.”