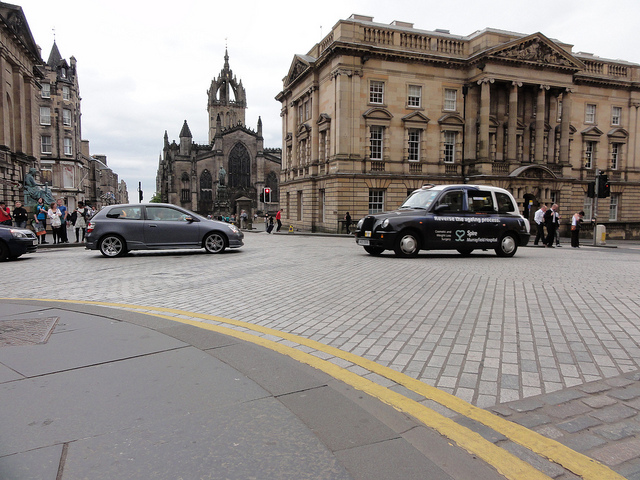 Plans to prioritise walking and cycling could put Edinburgh “amongst the greatest cities in Europe,” say Friends of the Earth Scotland

PROPOSALS under consideration to radically transform the transport system of Edinburgh have been welcomed by environmentalists and the Scottish Greens.

Edinburgh City Council’s Transport and Environment Committee are today [9 August] meeting to discuss a series of possible ventures outlined in the ‘Connecting our city, transforming our places’ strategy report, which – alongside ongoing efforts to implement a Low Emission Zone in the capital by 2020 – could dramatically change the face of transport in the city and provide a model for other urban areas in Scotland.

The report, published earlier this month, proposes: “The city centre would become a largely traffic free zone with controls in place to allow for essential traffic and with pedestrian priority in the city, town, and local centres.

“You would be able to go to, but not through the city centre. A series of hubs could be developed where buses would drop off and other forms of less impactful transport would take over. Pavements would be significantly widened and public spaces improved. Key streets would be pedestrianised.”

It continues: “There would be strategic walking routes and segregated cycle routes across the city with a citywide wayfinding network to guide pedestrians around the city.

“Public transport could be fully integrated with smart contactless payment for use across all public transport services. New park and ride interchanges could be provided at key points around the city with a series of new bus priority corridors linked to them.”

Air Quality News reports that councillors are expected to approve an eight-week consultation, which will examine ideas including pedestrianised streets and restrictions on traffic. In addition, Edinburgh City Council will also pursue regular vehicle-free days in the city centre, and other areas of major build-up through Edinburgh.

“These plans, alongside a new low emission zone for the city, are well overdue, and will help tackle some of the chronic problems in the capital such as air pollution and congestion. Green councillors want to make it much easier and more pleasant to walk and cycle around our city centre, and increased pedestrianisation and high-quality public spaces, alongside dedicated cycle routes, wider pavements and shorter waiting times at pedestrian crossings, can all help us achieve that.

“The council has worked hard to engage with local people on these plans already, but I would encourage residents, visitors and business owners alike to make their views known during the consultation. I hope we can take people with us on the journey of developing a more people-friendly city centre. And I’m confident that a vibrant Edinburgh where people enjoy spending time will also benefit local businesses through increased footfall.”

“These proposals could put Edinburgh amongst the greatest cities in Europe. European cities like Copenhagen, Oslo and Seville are living proof that giving greater priority to pedestrians is good for local businesses, good for air quality, and good for people.” Friends of the Earth Scotland Air Pollution campaign Emilia Hanna

Friends of the Earth Scotland’s Air Pollution campaigner Emilia Hanna also commented: “These proposals could put Edinburgh amongst the greatest cities in Europe. European cities like Copenhagen, Oslo and Seville are living proof that giving greater priority to pedestrians is good for local businesses, good for air quality, and good for people, and it’s great to see that Edinburgh could be going in the same direction.

“Well done to Edinburgh Council for putting bold plans on the table which could propel Edinburgh to become a modern, healthy city with cleaner air, low climate emissions and more accessible and enjoyable public spaces for everyone.  We urge all Committee members to get behind the most transformative options under consideration.

“Traffic-related air pollution causes over 200 premature deaths in Edinburgh every year, and has been linked with heart attacks, strokes, cancers, and stunted development in children and unborn babies. These plans could make it possible for more of us to walk, and cycle, and will certainly lead to a significant improvement in air quality.”

Ahead of today’s meeting, Edinburgh transport convener Councillor Lesley Macinnes said: “This prospectus is a truly ambitious document which is bound to generate some lively debate right across the city about what kind of place we want Edinburgh to be. It’s a powerful opportunity to make some really transformational changes to our city centre and town centres for the benefit of everyone who lives and works in or visits them.

“Frankly, the status quo is just not an option anymore. As a Council we are serious about tackling poor air quality, reducing congestion and making it as easy as possible to get around Edinburgh, especially by walking, cycling and public transport.”

Under the direction of the Scottish Government, Edinburgh is one of four Scottish cities required to put a Low Emission Zone into effect by 2020, in an effort to address the regularity with which these areas exceed the 40µg/m3 legal limit for nitrogen dioxide emissions. Details of how the Low Emission Zone will be implemented are expected to be revealed later this year, following the new consultation.

However, the Scottish Greens have been critical of efforts thus far to implement Scotland’s first Low Emission Zone in Glasgow. In March of this year, following Glasgow City Council’s decision to bring forward the implementation, some air pollution campaigners derided the plan as a “No Ambition Zone”.

Scottish Green Party co-convener Patrick Harvie MSP argued during First Minister’s Questions on 22 March: “We’ve known about illegal levels of air pollution for years, and the profound effect on people’s health while Scottish Government transport policy has been making it worse. With steps toward a Low Emission Zone in Glasgow, we have a responsibility to make sure it doesn’t set a precedent for weak action.

“It’s the government’s agency, Transport Scotland, that seems to be the biggest barrier to change. The First Minister must take on its cautious, business-as-usual approach, turn it into a catalyst for change and get the necessary resources invested.”

The Scottish Liberal Democrats have also applied pressure to the Edinburgh proposals, launching a petition which calls on Edinburgh City Council to ensure that any future Low Emission Zone covers Corstorphine, Murrayfield and Queensferry Road, after Lib Dem MSPs Christine Jardine and Alex Cole-Hamilton met with constituent Karen Bruce, who was left hospitalised by a series of debilitating asthma attacks and has claimed that her condition was aggravated by the air quality in her local area.

Jardine commented: “The health problems Karen is experiencing are clearly related to the terrible air quality that residents in Corstorphine have to live with on a daily basis.

“The fact that Karen’s asthma attacks are now putting her in hospital underlines how much we need a Low Emissions Zone here in the west of Edinburgh.”

Edinburgh’s plans to improve air quality have also faced criticism from the city’s taxi sector, after it was reported by the Edinburgh Evening News in July that 616 of the capital’s 1316 taxis would need be replaced by 2020, in accordance with Edinburgh City Council’s drive to cut emissions and adhere to EU guidelines.

Edinburgh Taxi Association chairman Mark McNally said: “We want to be part of the solution on air quality and we should be getting support from the council.”

While supporting the goal of improving air quality, McNally argued that these measures have been adopted too far in advance of the Low Emission Zone itself.