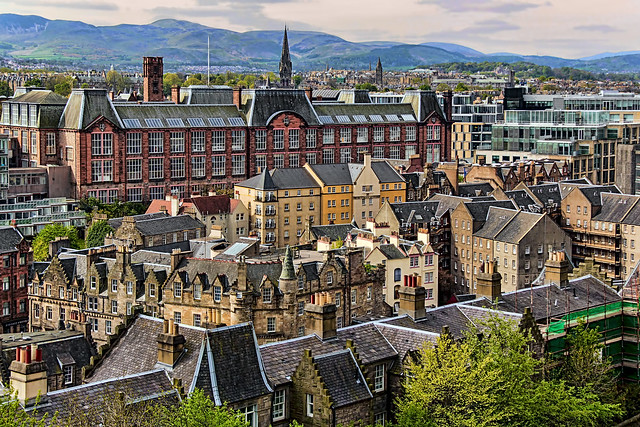 A NEW group campaigning to “protect liveable, affordable communities in Edinburgh” has called for a new licensing system and greater regulation of controversial short-term lets in Scotland’s capital.

Place (Protecting Liveable, Affordable Communities in Edinburgh) published their recommendations in April for tackling the drastic increase in the level of whole-property short-term letting in the city, ahead of a report to be published this week by the City of Edinburgh Council on the local authority’s own policy towards tackling the issue.

Increasing numbers of Edinburgh residents have spoken out against the growth of services such as Airbnb, while Place has expressed concern over the extent of unlawful short-term letting in the city.

While whole-property short-term letting is technically subject to planning requirements, Place argue that “only a handful” of properties have applied for this planning permission. Place also contend that enforcement action against those operating unlawful short-term lets is both slow and expensive for the council.

Place has proposed a new licensing system, under which homeowners can register for a home-sharing allowance of four whole-property short-term lets per year, and no two lets can occur in the same month. Owners who wish to operate more than four lets would however be able to apply for planning permission for a change of use.

Licences would be applied for by a “simple on-line system” by confirming health and safety checks, proof of relevant ownership and insurances.

Place also advocate that only licenced properties would be allowed to be advertised, making it illegal to advertise a short-term let without a valid licence number, and that the Local Development Plan be updated to ‘HOU 6’, an element from the 2010 Plan, which recognises the housing crisis and spells out resistance to the change of residential properties to other uses.

According to Place, these reforms would allow tourists to check which properties are operating safely and lawfully; permit neighbours to feel more safe and relaxed in their homes; give homesharers the confidence that they are operating in a safe and protected manner; and end residents’ competition with investors to find affordable and accessible homes, with the incentive for short-term letting investors removed.

Edinburgh Council will, Place continues in its proposal, “be able to identify unlawful activity with ease, collect relevant taxes to fund essential services and redirect funds currently being spend on temporary accommodation for the homeless. City planning decisions regarding housing we be fully informed by the knowledge of the number of dwellings in each area that are used for short-term letting and those available for residential use.”

Place published its recommendations online ahead of Edinburgh Council’s new report, which will detail its new policy on short-term lets.

The council already backs a regulatory system, and has advocated a new tourist tax to the Scottish Government as a part of the capital’s new tourism strategy, which has been developed in partnership with Edinburgh Tourism Action Group (ETAG).

Ahead of the report’s publication, Council Leader Adam McVey commented: “While we can feel proud of our world-class status and our city’s ever-growing popularity, we must also recognise and address the pressure on our core services and on residents. We have a responsibility to manage that impact while promoting the jobs and cultural opportunities that tourism provides.

“We’re also working with the Scottish Government on the introduction of a regulatory system for short term lets to help us deal with the impact this is having on our communities, which the Government are now taking forward through a consultation.”

Edinburgh Council was among the Scottish local authorities which welcomed First Minister Nicola Sturgeon’s announcement of plans to regulate the sector.

“The SNP will always back Scotland’s tourism industry. But we will also help people find places to live in the communities they want to call home.”

Research by InsideAirBNB, an open source worldwide data resource, shows that the number of AirBNBs in Edinburgh had doubled since 2016. CommonSpace reported earlier this year that there is one AirBNB registered in the city for every 48 residents.

Green MSP Andy Wightman, who leads the ‘Homes First’ campaign which has focused heavily on the short-term let sector, has succesfully amended the draft Planning Bill so that the creation of a new Use Class Order would require planning permission to operate short-term lets in residential property and give additional powers over such lets to local councils, as well as an extension of the current Landlord Registration scheme, so that short-term let operators would face similar tests to regular landlords.

Speaking at the launch of the Homes First campaign in 2017, Wightman argued: “The rapid rise in short-term lets is starting to undermine the basic human right to housing.”

Today [14 May], the Scottish Parliament debated the ‘Place Principle’, which would support “all those responsible for providing services and looking after assets in a place need to work and plan together, and with local communities, to improve the lives of people, support inclusive growth and create more successful places,” and potentially allow for community solutions to issues such as the short-term let sector.

In practice, the Scottish Government argues the Place Principle would “consider the benefits of planning, investment and implementation activity at the regional level of place – where that focus could drive faster rates of sustainable and inclusive economic growth.” The government motion in favour of the Principle was passed, with a Labour amendment noting “the negative impact of austerity.”