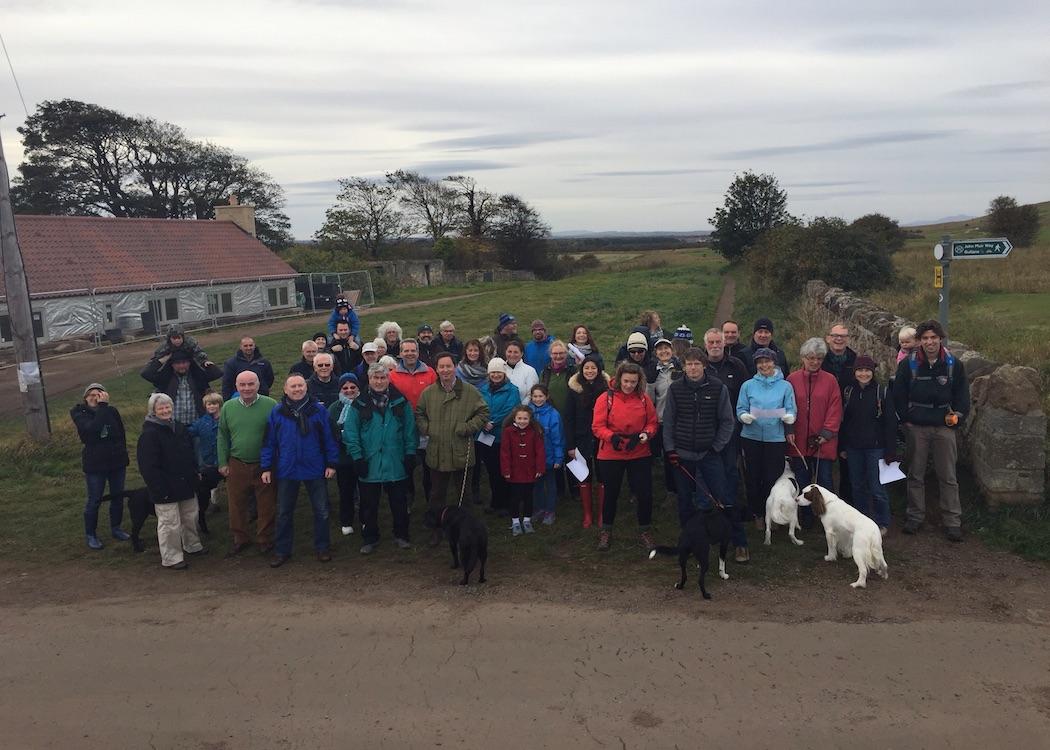 CAMPAIGNERS in East Lothian are calling for action to develop a core path for families, cyclists and walkers between two local villages in what it described as “one of the most protracted land access struggles in Scotland”.

The final 1.2km stretch of path required between Gullane and Drem would provide safe access away from a busy main road, and fulfil Scottish Government proposals to support rural access pathways.

However, the decade-long campaign has been repeatedly thwarted by council authority inaction and a lack of support from the local landowner.

Last weekend [Sunday 25 October] 60 people, with the support of the local community council and MSP, marched the route in a call for an agreement to be made to develop the path and provide community access.

Path campaign supporter Keith Burns said: “Families, walkers and cyclists should be able to travel safely between Drem and Gullane, free from the busy and dangerous main road.

“A core path for the remaining 1.2km section in dispute at Drem is the final link needed to make this happen. East Lothian Council believes it has no legal powers to enforce the path, and wishes to keep the basis of its legal advice undisclosed.

“It will bring health benefits by encouraging people to get out and enjoy the beautiful East Lothian countryside. We also believe it would help attract visitors to the area. This would be good news for local shops, pubs and restaurants.

“In a Scottish context, our campaign is unique as it brings into sharp focus the apparent shortcomings of existing Land Reform legislation.”

The 2003 Land Reform Act made it the duty of councils to draw up a system of core paths (section 17) and introduced the power of compulsory purchase, if consented to by government ministers (section 16b).

However, after 10 years the Gullane and Drem issue has not been resolved amid claims the local landowner only accepted one of the possible four proposals made by the East Lothian Access Forum.

Campaign spokesperson Iain V Monk said: “More than 60 local people took part in today’s walk. It underlined the community spirit that has, for years, underpinned this campaign. We were delighted that the local MSP, local councillor and community council representatives stood shoulder to shoulder with us today. There was a real feeling of solidarity and a determination to keep pushing to deliver a safe, off road path linking Gullane and Drem.”

Local MSP Iain Gray added: “In the end, to get the core path the two communities of Gullane and Drem want, we have to get the landowner to agree to some pretty minor works and the community needs to keep on trying to get that agreement.

“The great turnout for today’s community walk shows that people are not going to give up on this. That is the message as MSP that I take back and that’s the message I’ll give back to the council. We need to keep working on this and give communities what they want and need.”

The campaign has submitted freedom of information requests to the council in an attempt to find out the administration’s position on developing the path and what payments, if any, have been requested from the local landowner.

Core paths strategy is being reviewed during debate on the current Land Reform Bill.