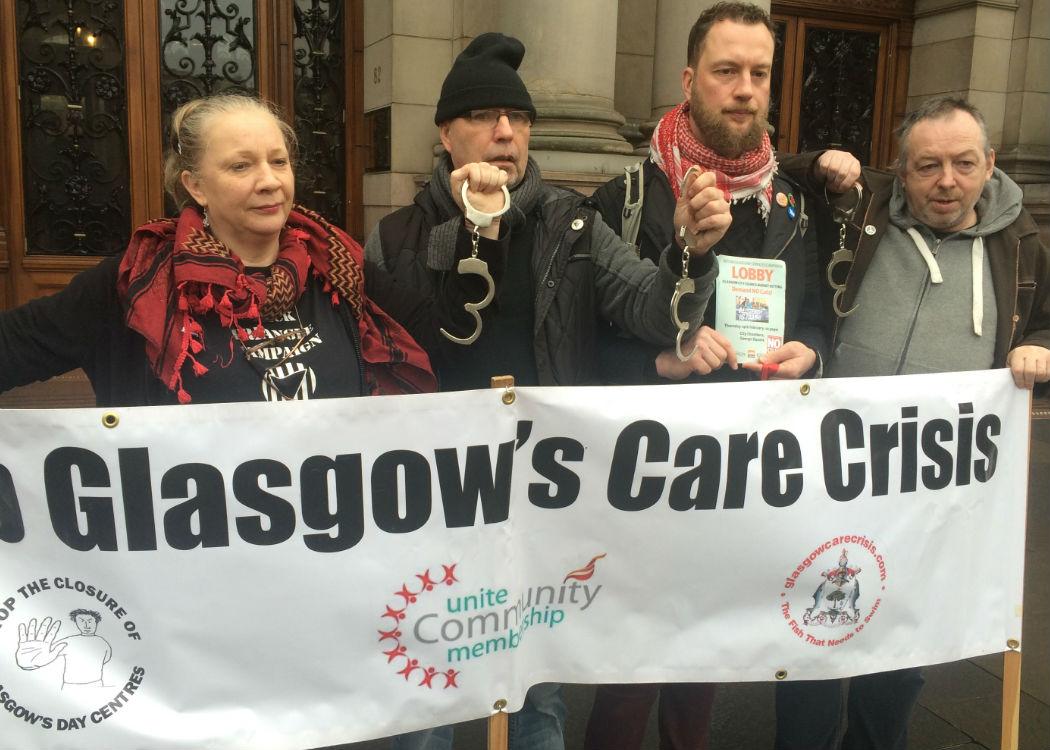 PROTESTERS today handcuffed themselves inside Glasgow City Chambers to oppose severe cuts to the city’s services.

Three members of pressure group Glasgow Care Crisis chained themselves to each other in the foyer of the chambers.

The council closed its doors for an hour as police arrived, before the activists chose to end the protest.

The Glasgow Labour-led council intends to cut PS29m from its budget on Thursday, with another protest planned for then. This is on top of over PS200m in cuts in the last five years that have led to 4,000 job losses.

Glasgow Association for Mental Health (GAMH) is facing possible closure after it emerged that local authority funding reductions would result in its budget being slashed by up to 40 per cent.

One of the protesters, David Churchley, said that the group took action to highlight the care crisis in Glasgow.

“The cuts to GAMH are appalling. It’s going to affect everybody. We’re here to say enough is enough. They think that we’re just going to accept this but we won’t.”

Another, Marion Nisbet, said: “We’re sick of being labelled the scroungers and skivers. I broke my spine when I was an addiction worker from Glasgow City Council. They took me job from me kicking and screaming.

“The main reason we’re here today is because they’re putting the cuts on the most vulnerable. As a Glasgow girl I want to be on the right side of history and that means standing up for vulnerable.”

A council spokesman confirmed the incident and added: “We shut the front door as a safety precaution but it has now been re-opened.”

The cuts have been oppossed by trade unions and community campaigners.

Unison branch secretary Brian Smith said: “The trade unions will support any council politician or political group who now says “No More Cuts”. We suggest using some of the council’s reserves and borrowing powers to meet the PS29m “gap” for 2015/16.

“This would allow the time and space to build a mass campaign of elected members, trade unions, user groups and local communities with the objective of winning more money from national government especially in light of the PS400m Scottish Government underspend. Glasgow’s politicians have a choice – make the cuts or do not.”

A coalition of groups are calling for people to lobby outside the City Chambers from 12.30pm on Thursday 19 February