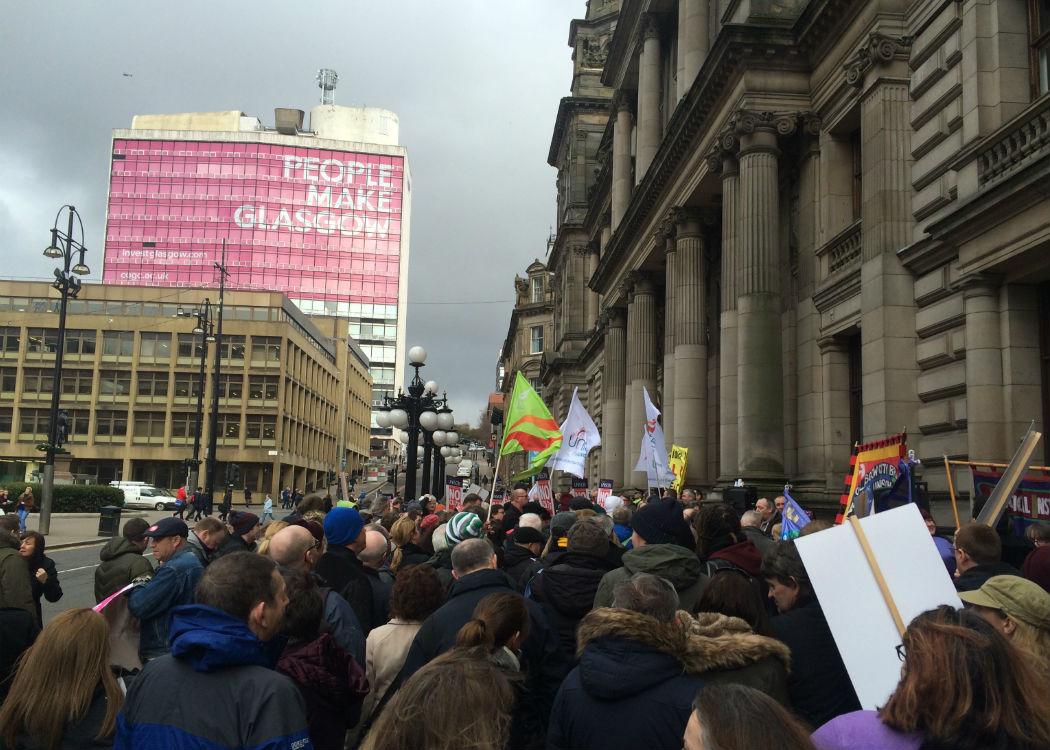 Hundreds of people rallied outside Glasgow City Chambers on Thursday to oppose the PS29m worth of proposed cuts to the city’s services expected to be passed at a budget meeting.

The council’s budget meeting will take place on Thursday afternoon and is expected to swing the axe, but campaigners and trade unionists say that a ‘no cuts’ budget is a viable alternative and have laid out a plan to fill the funding gap.

The budget is the latest stage of a programme of austerity by the city council that has seen over PS200m in cuts in the last five years that have led to 4,000 job losses.

Liam McLaughlin, who is standing to be the Scottish Socialist Party candidate for Glasgow East in the General election, said that the “council should grow a collective spine and stand up and defy the cuts”.

Another protester, social work student Victoria Heaney, said that the cuts this year would have “a massive impact on the numbers of people who are going to be in receipt of statutory social care”.

On Wednesday, CommonSpace reported that three members of pressure group Glasgow Care Crisis chained themselves to each other inside the City Chambers to protest the cuts’ adverse effect on vulnerable people.

Glasgow Association for Mental Health (GAMH) is facing possible closure after it emerged that local authority funding reductions would result in its budget being slashed by up to 40 per cent.

Others cuts include the closure of two of the remaining four day centres for learning disability, a cut of PS3m from housing support provided to older people, and a fall on education services for children in hospital.

Brian Smith, Glasgow Unison Branch secretary has supported a “No Cuts Budget” alongside other trade-union leaders in Glasgow from the EIS, Unite and the GMB, and has outlined three measures that he says would fill the PS29m funding gap:

– Use a further PS6m from the general reserve (leaving PS12m)

– Add PS20m to the existing PS1.6bn debt of the council

He said: The trade unions will support any council politician or political group who now says “No More Cuts”.

“This would allow the time and space to build a mass campaign of elected members, trade unions, user groups and local communities with the objective of winning more money from national government especially in light of the PS400m Scottish Government underspend”

Glasgow City Council leader Gordon Matheson said that the Scottish government was to blame for local government cuts: “It’s startling but true that if Glasgow received the same percentage share of the available local government budget in Scotland this year as we did in 2008, Glasgow would have an additional PS109m to spend on our vital public services.

“It’s only as a result of clear political leadership and sound financial planning that we’ve survived the last few years with no really substantial damage to services.”