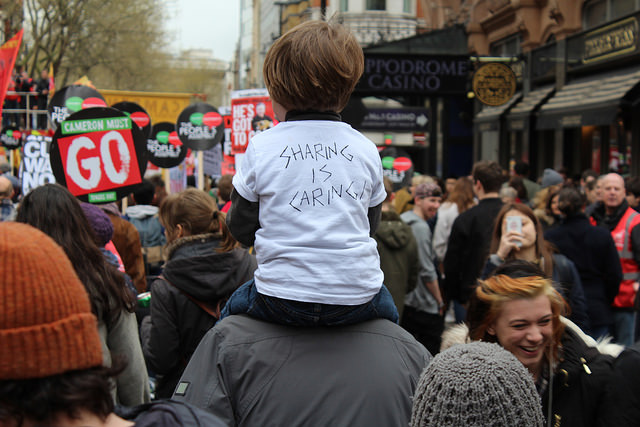 May has faced severe internal criticism since the General Election on 8 June, which saw the Tory party throw away a Commons majority on the eve of Brexit negotiations.

Since then, May has faced further criticism for her handling of the Grenfell Tower disaster, a blaze that saw the deaths of at least 79. She was accused of presiding over a shambolic and uncaring response.

May has been forced to form a deal with the hard right DUP, who recieved £1bn of public investment in Northern Ireland in return for support in key votes. Defeat in the Commons could result in May being toppled.

A bus organised by Unite, and carrying many young activists from the Better than Zero campaign to the protest, sold out within hours.

A unite spokesperson said: “From their dodgy deal with the DUP to their treatment of victims of Grenfell, the Tories have well and truly proven themselves as the nasty party and working people have had enough. Tens of thousands will be descending upon parliament to send a clear message to Theresa May – Not One more Day! Unite Scotland will be sending a bus load of members and activists to join the march and rally this Saturday.”

London saw mass protests in response to the Grenfell Tower blaze, with many blaming austerity and a generation of housing deregulation for the massive loss of life – the full extent of which is still not known.
Protest movements have had a massive impact on shaping recent UK politics, with social movements translating into a dramatic shift to the left in the Labour party and helping create an historic third term for the current Scottish Government.

One of the organisations behind the demonstration, the People’s Assembly Agiast Austerity, said: “The Tories are weaker and more divided than they have ever been. It looks likely that an early General Election will have to be called when Cameron steps down.

“However people voted in the referendum, we now need to unite and take to the streets to demand an end to austerity policies, to stand up to anti-immigrant racism and show our solidarity with refugees and migrants.”

The protest follows a week in which the government appeared to dig its heels in on austerity, maintaining a public sector pay cap of 1 per cent, a two per cent pay cut against inflation.