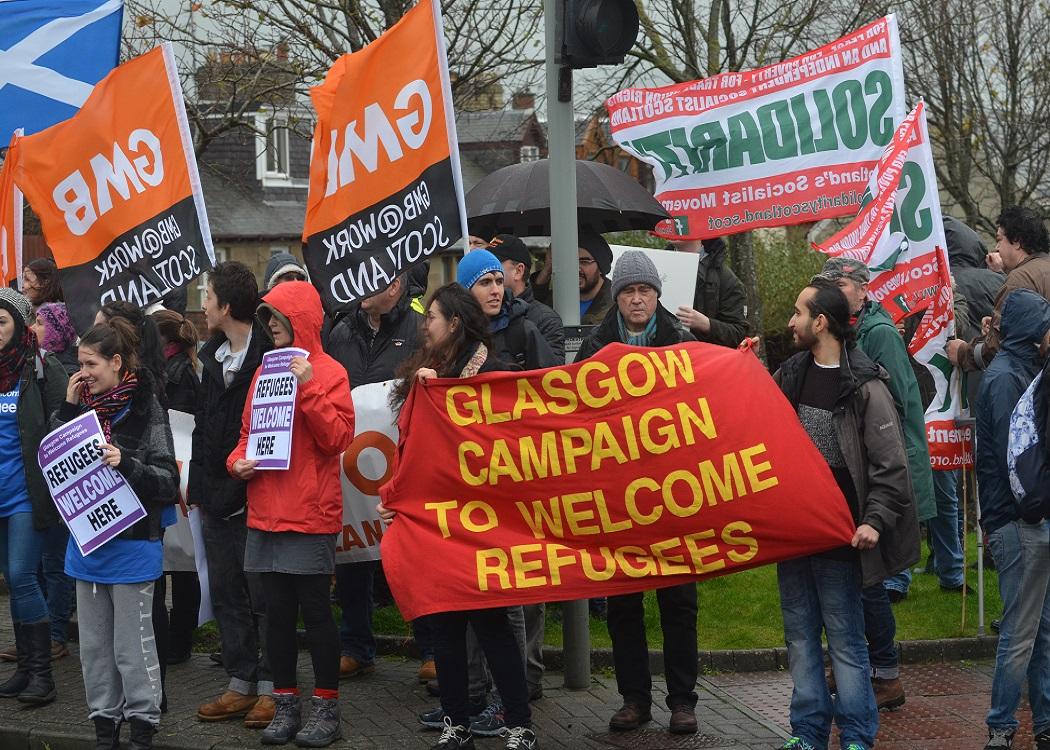 TWO arrests were made during a bad-tempered protest and counter-protest over the temporary housing of asylum seekers in a hotel near the South Ayrshire village of Monkton on Sunday.

The far-right Scottish Defence League had planned to stage a rally in the centre of the village in what they said was an act of solidarity with concerned local residents, however, police prevented them from entering the village due to fears over potential disorder.

The SDL claims locals are worried about the presence of people who have been placed in Adamton House Hotel on the outskirts of the village by the Home Office while awaiting assessment of their claims to refugee status.

Announcing the protest via Facebook, the SDL said: “Several local residents have asked us to help them protest against 150 asylum seekers being housed in a luxury hotel beside their village.

“Large gangs of these young Muslim men are gathering in the village and local women and young girls have said they feel scared and intimidated.”

Another Facebook posting claimed the residents are “not the light skinned Arab Syrian refugees that the government has agreed to take from the refugee camps, who are security checked, these are extra, secret, dark skinned African males the type who arrive in the country illegally from Calais and destroy their documents so there is no way to check if they have been murderers, rapists or paedophiles in their own country”.

It continued: “Large gangs of these mostly young Muslim men are congregating in the village and local women and young girls have told us they are scared.”

Having been prevented from entering the village, around 80 SDL members instead gathered at Adamton House Hotel on the outskirts of Monkton around 1pm.

A group of 250 counter-demonstrators from an alliance of trade unionists, members of the Ayrshire branch of the Scottish Green Party and anti-fascists assembled in the centre of the village to mount a counter-protest unaware that the SDL action had been moved.

However, SDL protesters managed to enter the village in smaller groups and, as they arrived, police officers moved in to protect one group of five SDL members waving the Union flag when they became surrounded by angry counter-protesters chanting “you’re not welcome here”.

A two hour long stand-off developed with opposing protesters kept apart by lines of police as the two groups hurled verbal insults at each other.

Spokesperson for the SDL demonstrators, Samantha Smith, 23, from Edinburgh, claimed Police Scotland had abused their powers by preventing them from assembling in the village.

“This won’t be the end of it, not until they stop housing these people here. The villagers are really unhappy and are scared to go out.

One Monkton mother, who did not wish to be named, said: “I am scared and I feel for my daughter who comes home and asks me if they are going to kill us or blow us up, we’re just terrified.

“I think it’s a disgrace that they get money to live on and there are families in this village who are struggling.

“We were told refugees were coming before Christmas, we didn’t know they were already here.

“We have had no information from anyone.”

However, local MSP Chic Brodie who joined the counter-demonstration said he had not received any complaints about the matter from his constituents and rejected the woman’s claims while calling for more information for locals.

“That is a bit extreme. I haven’t had anybody complaining to me. What we have to do is dampen down the whole thing.

“A demonstration is not helpful. What we have to remember is these people are asylum seekers.

“What we have to do is ensure we welcome them and by and large the people of Scotland show care and compassion to welcome refugees.

“We have to embrace them and not hold them up us ogres.

“We need to ensure the maximum amount of information to explain who they are and why they are here and that’s incumbent on the government and the local authority.”

She echoed Mr Brodie’s thoughts on how the migrant crisis has been dealt with by some sections of the media.

“With the lack of information and some of the racist propaganda in the media, people who are disillusioned and disenfranchised by the political system don’t really have a way to get the the facts so they turn to groups like the SDL or other racists organisations.”

A spokesperson for the Home Office declined to confirm the country of origin of the asylum seekers in order to protect their privacy, stating only: “All applications for asylum are considered on their individual merits.

“Where people establish a genuine need for protection, or a well founded fear of persecution, refuge will be granted.

“If someone is found not to need our protection, we expect them to leave the country voluntarily. Where they do not, we will seek to enforce their departure.

“The UK has a proud history of granting asylum to those who need it and we are committed to providing safe and secure accommodation while cases are considered.

“The cost of using hotel accommodation to board asylum-seekers is borne by individual contractors who make such decisions, including which premises are used.

“We have made clear to our providers that the use of hotels is only ever acceptable as a short-term contingency measure.”

Responding to the SDL’s claims, a Scottish Refugee Council spokesperson said: “We totally condemn any kind of racism or hate speech and feel that the SDL’s communications around this are clearly in that territory.

“But we know the SDL don’t speak for everyone and there are many decent people in Ayrshire and across Scotland who feel a lot of sympathy for refugees right now.”