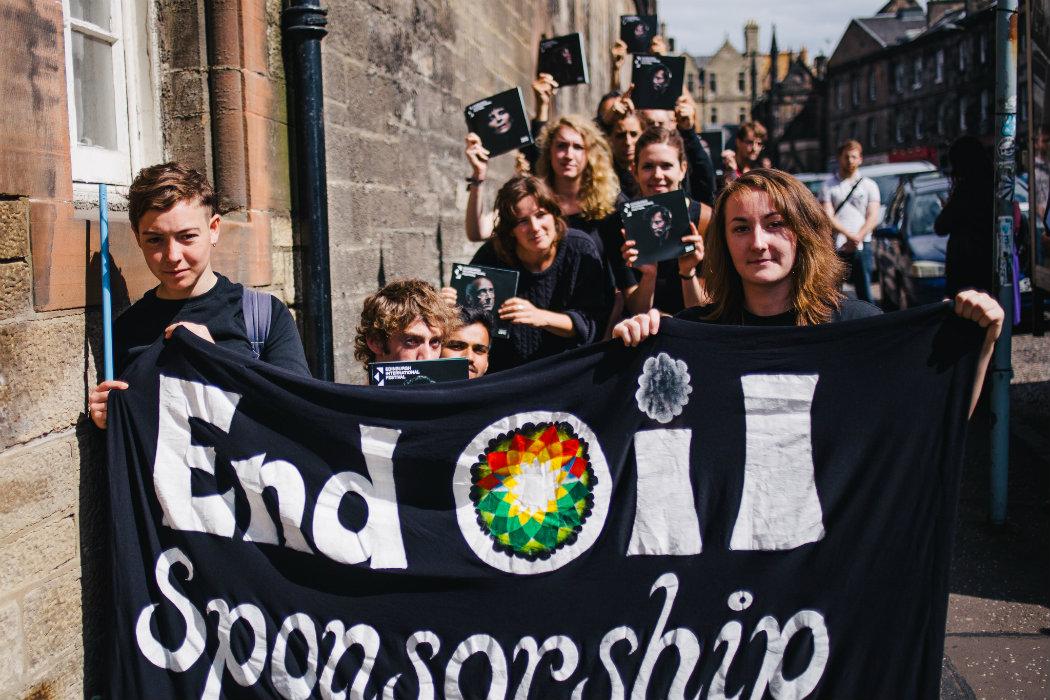 THE EDINBURGH FESTIVAL headquarters became the stage for protest on Sunday as activists challenged the event’s links to fossil fuels company BP.

BP, which is one of the world’s largest oil companies, has been subject to intense criticism since the Deepwater Horizon spill which released 4.9 million barrels of oil into the Gulf of Mexico.

The protest in Edinburgh – which campaigners said “re-enacted the spill” and removed the BP logo from the festival building – was organised by campaign group BP or not BP, Friends of the Earth Scotland, and Edinburgh People and Planet campaign.

Chris Garrard from BP or not BP? said: “This marks the beginning of the end of BP’s sponsorship of the Edinburgh International Festival. With leading artists speaking out against the sponsors of their own shows, the festival has to listen. If the festival is genuinely committed to sustainability, that has to apply to its sponsors too. BP is just one of many – there’s no reason why it can’t be replaced.”

The protest following successful campaigns at Glasgow and Edinburgh universities for a reduction in investments in fossil fuel companies. In Edinburgh students occupied a campus building, before winning concessions from management on the issue of fossil fuels divestment .

Ric Lander, Friends of the Earth Scotland, said: “Scotland has world leading climate targets and a fast-growing renewable energy industry. Our universities and faith groups are ditching their ties with fossil fuels. Speaking to people at the festival today a lot of folk seem to agree that we should not let climate-wrecking companies like BP use Scotland’s treasured public arts to buy a veneer of respectability.”

Eleanor Dow, a medical student and Edinburgh People & Planet campaigner, added: “We need to expose this absurd and dangerous act of greenwashing by a company that is contributing to catastrophic climate change. With the triumph of our occupation this year, which forced Edinburgh University to drop its investments in three major fossil fuel companies, it is clear the fossil fuel divestment movement is winning. The EIF needs to get its act together instead of remaining complicit in the destruction of our planet.”

BP is pushing ahead with plans to expand oil drilling in the environmentally sensitive Arctic region. Last year the company made a $4bn operating profit.