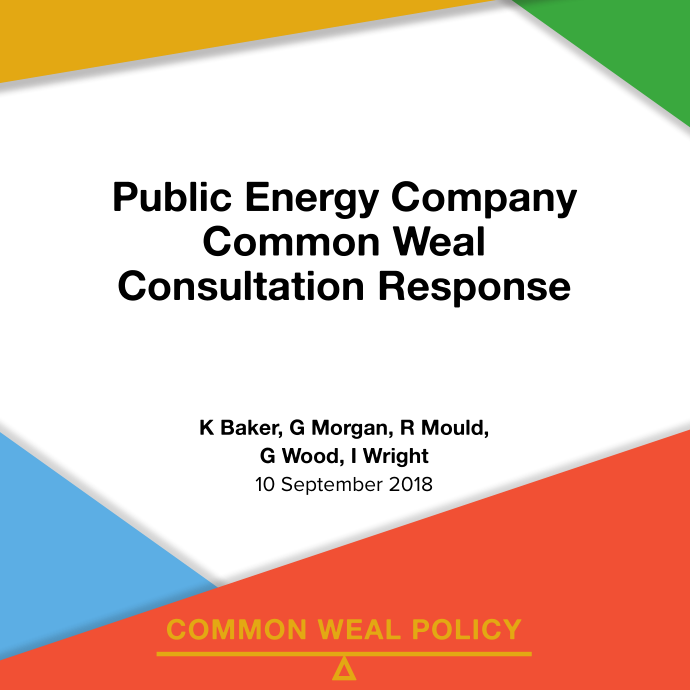 These are the recommendations of Common Weal’s Energy Working Group in their submission to the Scottish Parliament’s recent call for views on the subject. The submission can be read in full here.

Common Weal has been campaigning for reform of Scotland’s energy systems since our inception. Indeed, our first published paper – Repossessing the Future – dealt directly with the issue of renationalising Scotland’s energy grid in a manner that did not cost consumers and taxpayers any more than they are currently paying for the maintenance of the privatised systems.

This new consultation response states that a publicly owned energy company must be founded on four core principles.

1) It must have the ability and mandate to create new infrastructure platforms.

3) It must increase public engagement and participation in the energy market.

4) It must reduce costs to consumers.

The consultation response goes on to outline the various advantages and opportunities to be found in building a POEC such as being able to underwrite the costs of upgrades to alleviate fuel poverty or co-ordinating renewable energy projects.

The issue of energy is far more complex than just cost of electricity and gas to customers.  Important though costs are, the interrelationships between energy, the environment and economic welfare of the country are such that a co-ordinated approach is required for policy development and implementation to be truly effective.

Although energy is not a devolved competence in Scotland, there is no reason why we should not seek to maximise the opportunities provided by the GB legal and regulatory framework for Scotland by operating these rules within a wider, co-ordinated policy framework.  Private energy companies must operate in the interests of shareholders and therefore invest for profit.

While Government can work with private organisations to deliver useful initiatives in the area of energy and the environment, CW believes that establishing a publicly-owned energy company would be the most appropriate response to the need for energy policy development and delivery that focuses on areas that are financially unattractive to shareholder-owned utilities.

The Scottish Government’s intention to establish a publicly-owned energy company (POEC) marks a significant and welcome shift in Scottish energy policy however, many potential pitfalls now lie ahead and other countries harbouring similar ideas will be watching closely.

Whilst securing full devolution of all relevant powers, particularly the Electricity Act, has to remain central to Scottish energy policy, the goal of establishing the POEC by 2021 now ramps up the pressure on the Scottish Government to do more with the powers it already has.

In this respect, our response identified a number of key issues that will need to be addressed as we move towards this deadline, including the need for the company to be a generator of energy, not simply a supplier, and a developer of first resort for projects, such as new district heating systems, that may offer less in terms of financial returns but significantly more in terms of the benefits to communities, the environment, and the fuel poor.

We look forward to working with the Scottish Government to maximise the potential of the POEC to deliver low-cost renewable and low carbon energy to the communities and householders who stand to benefit most from the new company.

Common Weal has been encouraged by the level of engagement with the Scottish Government and we are looking forward to continuing to work closely with stakeholders as this proposal progresses.