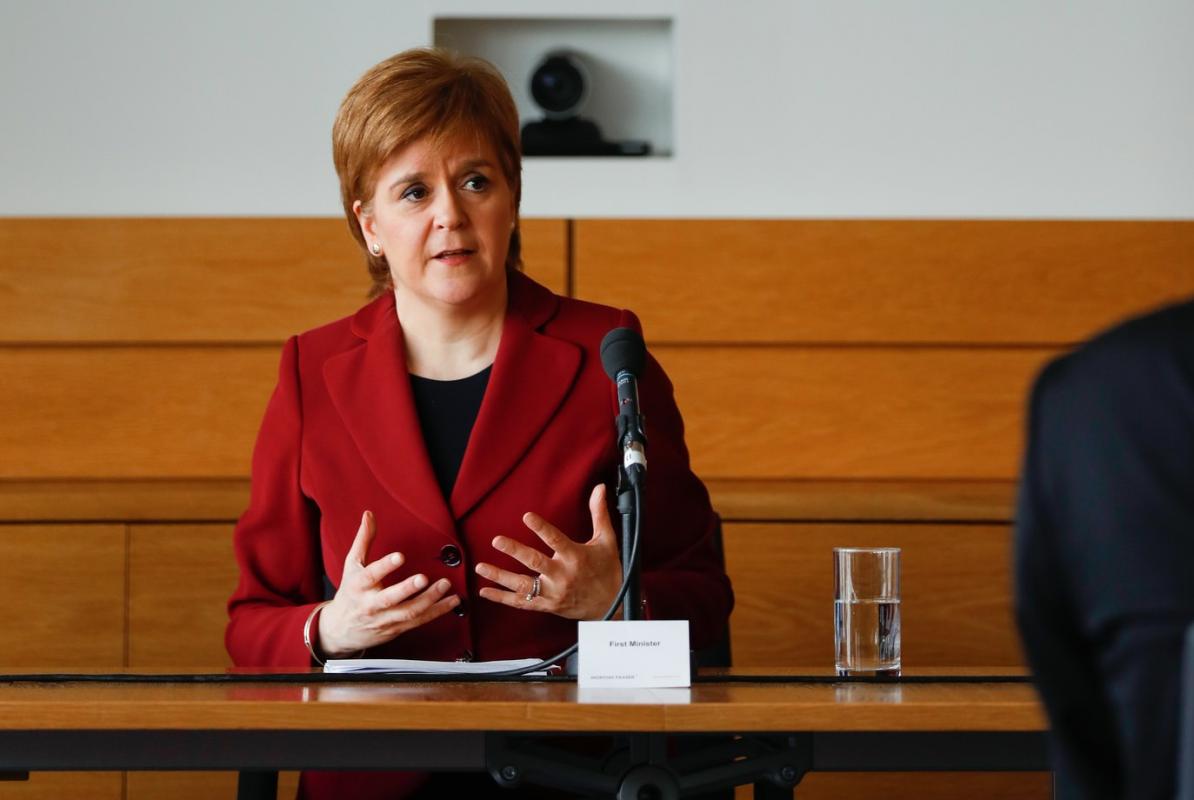 “The time for debate has passed,” says Nicola Sturgeon following publication of plan for the new national investment bank

THE SCOTTISH GOVERNMENT will proceed with the establishment of a Scottish National Investment Bank (SNIB), which will be operating “in shadow form” by 2019, First Minister Nicola Sturgeon has announced.

Sturgeon confirmed the Scottish Government’s commitment to the SNIB, first announced at the SNP’s autumn conference in 2017, at the offices of Morton Fraser law firm in Edinburgh, following the official publication of an implementation plan for the SNIB by Tesco Bank CEO Benny Higgins and his advisory group.

A national investment bank is different from a private one because it is owned by the state and can borrow money in a similar way to the Treasury. However, when such a bank invests money, it typically does not show up in the public borrowing figures, and can thus afford to take a longer view than most governments, potentially investing in far more ambitious projects, such as dramatic alterations to nationwide infrastructure.

The plan outlines the overall vision for the SNIB, emphasising the permanence of its publicly-funded setup, and makes a number of recommendations regarding the bank’s establishment.

Key among these are that the SNIB should be administratively and operationally independent of the Scottish Government (although the Chair and non-executive members of the SNIB should be appointed by Scottish ministers). Furthermore, as the Scottish Government will be the sole shareholder and sponsor of the SNIB, Scottish ministers should establish a five-year “Strategic Framework”, which the bank would then respond to in its investment and business plans.

The SNIB should become self-sustaining in the longer term, the plan continues, raising its own capital to fund investments. The bank would be supported by long-term capitalisation of at least £2b over the first ten years of its existence.

Also, the plan recommends that the SNIB’s activities be aligned with those of the British Business Bank in Scotland, which may require a “strategy of alignment” between both institutions. What compromises might be necessary from the respective banks to achieve this alignment is not yet known.

The SNIB, argues the plan, should adhere to “the highest standards of transparency, accountability and the management of risk.”

The text of the plan itself describes the establishment of a SNIB as a “once in a generation opportunity”, which should result in “a cornerstone institution in Sctland’s economic architecture”.

Quoting from the Scottish Government’s most recent Programme for Government in articulating its vision, the implementation plan argues that the Bank should aim to achieve a “step change in growth for the Scottish economy by powering innovation and accelerating the move to a low carbon, high-tech, connected, globally competitive and inclusive economy.”

Addressing press at the plan’s launch, Higgins explained the rationale behind the recommendations by quoting his grandfather, ‘Big Tony’: “When you approach a problem with many possible answers, apply the principle of Occam’s razor… Strive to choose the simplest one.”

“I think there is an incontrovertible case for the creation of this bank. It is not a novel idea. It is right for Scotland.” Tesco Bank CEO Benny Higgins

In a second, perhaps more surprising quotation, Higgins became perhaps the first banker in history to cheerfully quote a bank robber, who once responded to the question of why he robbed banks by answering: “Because that’s where the money is.”

Explaining how the conclusions of the plan had been reached, Higgins emphasised the diversity of the advisory group and expressed his gratitude to the “fulsome” 1100 responses to the consultation process, saying they had “tapped into all the information available.”

In articulating why he believed a SNIB was necessary and appropriate, Higgins recognised that the outlook for Scottish economic growth is “languid at best”, pointing out that estimates for GDP growth over the next four or five years hover around one per cent, as well as noting that business investment in Scotland has suffered from a trend in reduction in the recent past.

Reiterating the emphasis on environmental considerations in plan’s recommendations regarding SNIB investment, Higgins said: “The future economies that succeed will be those that are based on low-carbon,” before arguing for the importance of establishing resources for the future than Scotland can rely on during this transition.

Discussing ownership, Higgins said that in order for the Bank to be consistently focused on its vision, it needs to be owned by the Scottish Government “in perpetuity”, apparently ruling out the possibility of any future creeping privatisation.

“If we get it right, then this has the potential to be truly transformative.” First Minister Nicola Sturgeon

Higgins acknowledged that, in order to proceed, a prospective SNIB will require certain dispensations from HM Treasury, such as the carrying forward of reserves, but said that “a very constructive” dialogue with the Treasury had already taken place.

“I think there is an incontrovertible case for the creation of this bank,” said Higgins in his concluding remarks. “It is not a novel idea. It is right for Scotland.”

Higgins expressed his hope that “the essence” of the recommendations would be accepted by the Scottish Government.

Following Higgins’ presentation, Nicola Sturgeon praised the “immense amount of work” the advisory group had achieved in a relatively short amount of time.

Echoing the plan’s pragmatic assessment of Scotland’s economic outlook, backed by the Scottish Fiscal Commission’s pessimistic view of the potential impact of Brexit – which the Scottish Government has repeatedly warned of – Sturgeon said: “The importance of that discussion right – where we are now in terms of economic development – really can’t be overestimated.”

Sturgeon continued to say that, despite Scotland’s “notable success stories”, and the many Scottish companies and concerns that have earned global reputations, “Scotland’s economy faces big challenges.”

Sturgeon noted that despite Scotland having almost closed the productivity gap with the rest of the UK, the nation still lags behind many of its European neighbours.

Recognising that economic growth has been “lower than we would want it be” in recent years, Sturgeon characterised the SNIB as a potential engine for economic growth, arguing: “It (the plan) sets out both a clear vision of what a national investment bank can achieve, and a grasp of the practical steps necessary.”

Dismissing any impression that the discussion was still purely theoretical, Sturgeon confirmed: “The Scottish Government will now proceed to establish a Scottish National Investment Bank. I think the time for debating has passed.

Sturgeon went on to confirm that the Scottish Government had accepted the following recommendations from the implementation plan: that the SNIB be publicly-owned, independently operated, mission driven, focused on those types of investment not already provided by the market, and should address Scottish economic priorities in an inclusive manner.

A formal, more detailed response from the Scottish Government to the recommendations will come in May. The bank should be operating “in shadow form” by 2019, pending the passage of the necessary legislation.

READ MORE: Common Weal congratulates Scottish Government on plans for a Scottish National Investment Bank, but say “devil will be in the detail”

Sturgeon ended by reiterating her focus on the overall vision for the SNIB, saying she believed that Scotland has the potential to be a country, “as we were generations ago,” that designs and develops technologies and innovations which change the world.

“If we get it right,” said Sturgeon, “then this has the potential to be truly transformative.”

Responding to the implementation plan’s publication, Professor Mariana Mazzucato, Director of the Institue of Innovation and Public Purpose at University College London, said: “Importantly, the bank will not just seek to simply correct market failures. It will help steer the path of innovation towards overcoming key challenges by creating and shaping new markets and catalysing activity that otherwise would not take place.”

Also commenting, Dr Craig Dalzell, Head of Research for the Common Weal think tank, which has long advocated for the establishment of a SNIB, told CommonSpace: “The Scottish National Investment Bank is one of the most ambitious projects undertaken by the Scottish Government since the beginning of devolution.

“This kind of project is one that, no matter what is proposed, could always be even bigger and better than it is but the foundation laid today is one with the potential to be transformative.

“Work now has to be done to ensure that the wider public stakeholder community can still influence or advise the mission of the bank and to ensure that it rises from that foundation to reach its potential.”