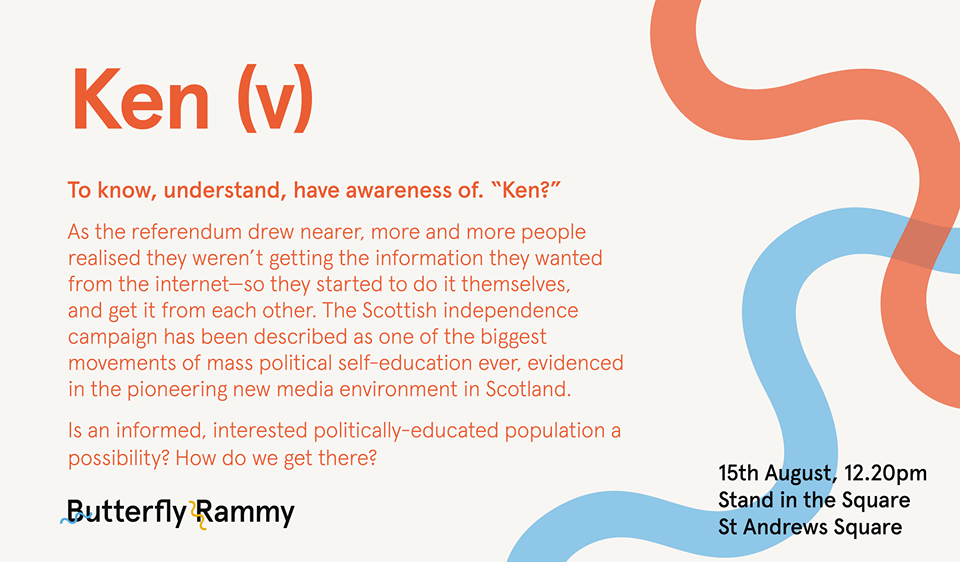 Singer songwriter and political activist speaks to CommonSpace about radical politics, Scots, and the importance of diversity in the arts

BORN in Rutherglen and raised in East Kilbride, Declan Welsh is a singer-songwriter who has been described as a lyrical genius. At only 21 years old, Welsh has already supported acts such as Glasvegas, Ocean Colour Scene, Squeeze, Eddi Reader, Neon Waltz, Hector Bizerk, Baby Strange to name but a few, and will support The Proclaimers in May.

He is performing at the Butterfly Rammy show at the Fringe festival about Scotland’s political awakening, which begins this evening (7 August).

Tell us how you came to be involved in art and politics.

“I’ve always been into politics, but the real turning point was the referendum. My music had always included social commentary, but getting involved in National Collective and touring with Yestival allowed for art to act as a starting point for political conversations.

“I’m fascinated by the idea that culture can replace religion in contemporary, secular societies, to act as a code of reality and an instigator of social change.

“Art is a tool that can be used to deal with and imagine the world we want to live in.”

Why do you think that the use of Scots language in Scottish art and in our creative industry is important?

The use of Scots in art allows people to communicate in the way they feel most comfortable – The diversity and variations within Scots is what really allows for this to happen. The narrow construct of the Queen’s English restricts the ways in which we can express ourselves.

How can we continue to get artists engaged in politics and ensure that they continue to articulate a challenge to politics as status quo?

“The gift of the Yes movement was it gave people optimism, and belief that things can change. Obviously there’s a place for observations, but it is an art of hope, rather than solely commentary.

“People really believe they have the power to change things. What we need to do now is create a space to allow for creativity and imagination, and ensure that space is inclusive.

“Instruments, rehearsal spaces, these are all expensive… Going into the world of music is a huge risk, and what you tend to find is that people with financial security are most likely to take that risk – They are supported and have fallback options.

“There’s not enough representatives of women and ethnic minorities in music, and nobody wants to talk about it because it’s not explicit sexism or racism, but we need to address it and make it more inclusive.

“The more diversity we have in music, the more discussions, breadths of views and diversity of opinions we can put across.”

Has the connection between creativity and politics been lost in Scotland in the aftermath of the referendum?

“There’s still a connection between creativity and politics, but it’s quite a niche market. The genre of music tackling politics is predominantly hip-hop – A longstanding reaction of oppression.

“Just now, I think we’re seeing some bandwagon-esque contributions. We need to encourage critical thought. Positivity is amazing but in terms of artistic contributions, there’s still a gap where we should be critically analyzing ways in which we could improve society.”

What do you think Butterfly Rammy will bring to the Edinburgh Fringe?

“Looking at the line up, there are some great contributors, like Jenny Lindsay. [The show] will facilitate a discussion on how to move forward – not just to independence – but also to building a fairer, more just, more inclusive society.

“Bringing Scots into the show will create a broad, reflective, positive discussion.”

For more information on Butterfly Rammy visit the facebook event.