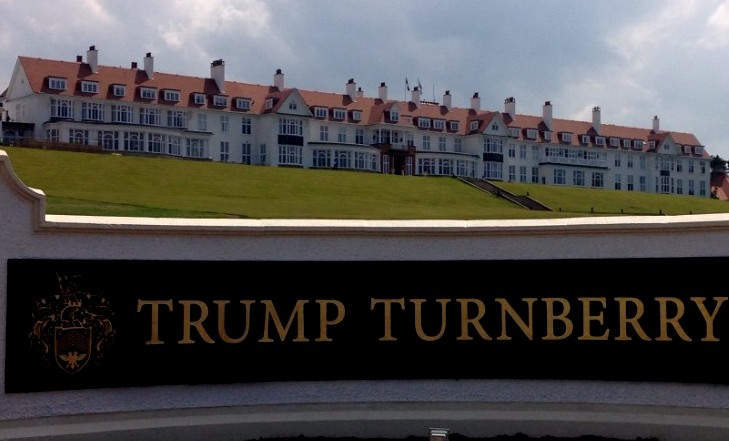 THE AYRSHIRE CHAMBER OF COMMERCE (ACC) will tonight (10 March) host alongside comedian Karen Dunbar, its inaugural meeting at Trump Turnberry the local resort of the controversial US President Donald J Trump.

Campaigners responded poorly to this news citing the president’s many racial and gender based statements on the his campaign which was considered by political opponents and allies to be divisive.

There is also concern that the event being sponsored by Barclays bank which has benefited hugely from the election of Trump and has been lobbying for reduced financial barriers in the US and UK.

“Given his attempts to bully the Scottish government, this would be a weird decision by the ACC at any time, it sends completely the wrong message to the Scottish people.” Nick Dearden

Nick Dearden, director of social justice campaign organisation Global Justice Now, said: “Donald Trump represents business at its most irresponsible, aggressive and unpleasant. His attitude as a businessman towards Scotland is the same as his attitude as the US President towards most of the world – that it exists to be exploited for his own wealth and power and to hell with the impacts on people and the planet.

“Given his attempts to bully the Scottish Government, this would be a weird decision by the ACC at any time, but given Trump’s extraordinarily divisive policies at this moment, it sends completely the wrong message to the Scottish people.”

Last week after keeping the host “a secret” the ACC announced that Karen Dunbar, host of the Karen Dunbar show, would return to Scotland for the organisation’s Platinum Anniversary Dinner today (10 March).

However campaigners have expressed confusion given that Dunbar is considered a role model as a successful LGBT actor, singer and comedian and winner of the role of model of the year at the 2016 Icon awards. In 2014 she appeared in Pink’s Scotland list of the most influential LGBT celebrities who have contributed to the nation’s cultural quality and diversity.

In response to the news that Karen Dunbar would be hosting a corporate dinner at one of Donald Trump’s Ayrshire resorts, a spokesperson from Paramount creative, the firm that hosts the Icon awards, told CommonSpace that they were aware of the situation but did not feel it “was their place to question who she works for or where she does jobs.”

“It’s disappointing for businesses who might have wanted to attend such an event but would otherwise chose to give it a miss due to the chosen location.” Yvonne McLellan

Dunbar courted controversy earlier last year when she was criticised by some for referring to Ruth Davidson as “dyke-d” during a performance at the Scottish Independence Convention.

Although the ACC couldn’t be reached for comment after several attempts the body did released a statement on the event saying: “Her quick wit and one-liners saw her go down a storm at the Ayrshire Business Awards in 2015 so discussions took place immediately to secure Karen as host of our special night on the Chamber’s calendar.”

It is possible to book a table for the Turnberry from £85 per person and a special room rate of £140 Bed and breakfast based on single occupancy in a non ocean view room.

In response Yvonne McLellan, the Scottish Green Party candidate for Kilwinning, North Ayrshire, told CommonSpace: “There are swathes of prestigious venues across Ayrshire that could be chosen to host the event. It’s disappointing for businesses who might have wanted to attend such an event but would otherwise chose to give it a miss due to the chosen location. It would be nice if in future the Ayrshire Chamber of Commerce could factor this in when planning further events.

“We hope that as many people as possible take a stand against the racist and misogynist views of Donald Trump. Should the US president visit the UK this year, it could be an ideal opportunity for people in Scotland to let Trump know that his vile views are not welcome here.”

The ACC Platinum Dinner has caused further concern given the connections between itself, Trump’s resort and Barclay’s bank which has been pushing for the stripping away of banking regulations in the US and UK.

“Donald Trump represents business at its most irresponsible, aggressive and unpleasant.” Nick Dearden

Barclays, who refused to comment on the Turnberry dinner, is seen as one of the big winners from Donald Trump’s controversial plan to dismantle regulations aimed at preventing financial crises.

Last week, the US president signed an executive order to greatly weaken the reforms put into place by the Obama administration after the 2008 crash. Called Dodd-Frank the regulations partially curbed the worst excess of America’s mortgage industry and also limited the ability of banks to use their own capital to bet on financial markets.

Of the UK’s banks, Barclays has the most to gain from the proposed reforms. It has one of the most lucrative businesses on Wall Street after pouncing on Lehman Brothers following its 2008 collapse.

Barclays in response to news about the executive order, which must be guaranteed by a vote by the US Congress, saw a boom in its value as its profits rose 182 per cent to £3.2bn from £1.1bn the year before.