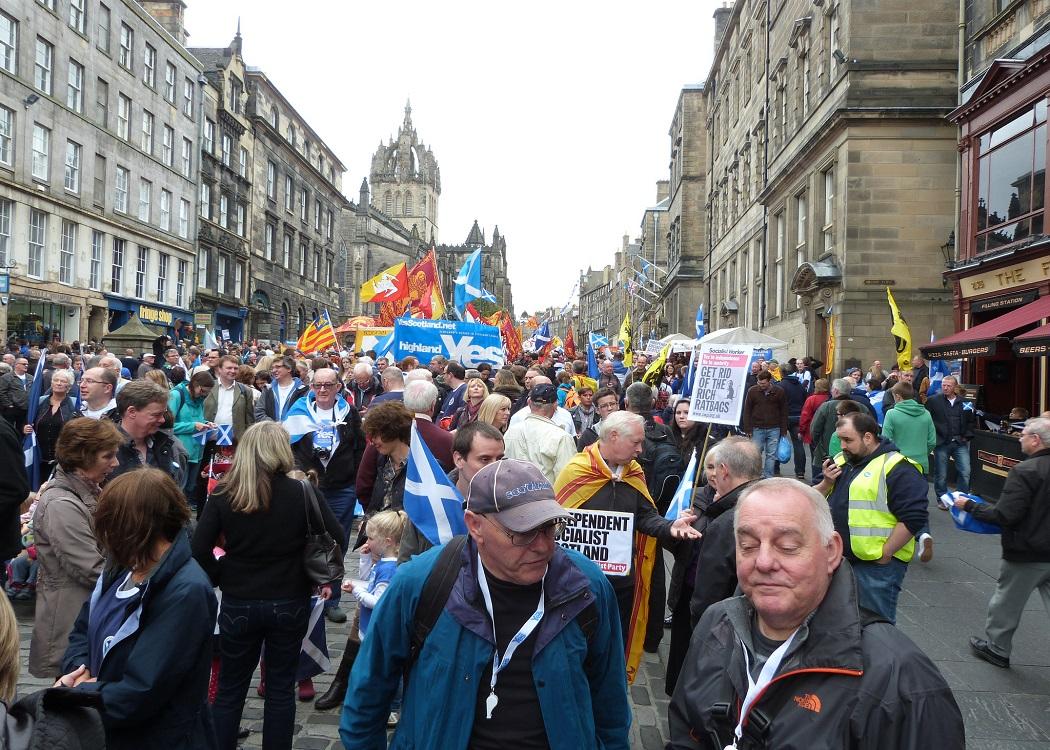 MY name is Rab Hay and I am a deputy manager in a pub in Edinburgh called The Athletic Arms, or as it better known, The Diggers.

I haven’t called myself this for the last 18 months, but as I progress, I believe myself to be an activist.

I am part of Common Weal Edinburgh South, the Radical Independence Campaign (RIC) and Rise, and I have to been to meetings from all the different parties. I recently helped out at the Butterfly Rammy and this gave me a wee buzz I haven’t felt since last year.

I have met so many wonderful people since last summer and I hope to continue to do so.

It was so good to see all the different grassroots groups springing up, I learnt so much from the Common Weal book, Wings over Scotland, the Scottish Greens, the SSP, the SNP, National Collective and RIC.

To go back to the beginning of my story, at the turn of 2014 my best friend and colleague, Pepi Levogianni, a Greek filmmaker and anarchist, and I started to discuss Scottish independence and how we could get involved.

We came up with the idea of doing a documentary, interviewing people from both sides, although we were both on the Yes side. We began the process of looking into all the information we could find, hours of research during the day and discussion at work at night.

It was so good to see all the different grassroots groups springing up, I learnt so much from the Common Weal book, Wings over Scotland, the Scottish Greens, the SSP, the SNP, National Collective and RIC.

We had some fair old rammies: one of us would take the No side and try to come up with questions that were fair and equal. I was going to be the main inquisitor as she was behind the camera, I had been in two of her films and we had done acting classes together.

We then had to find people to interview, with people from the Diggers aplenty as we were allowed to wear our Yes badges which prompted many long, heated and informative discussions.

We went to the comedy night that National Collective put on at Summerhall, Pepi was allowed to film it, and I got 15 names of people to interview in the bar afterwards.

We began to meet more Yes voters at a protest during a visit from Nigel Farage to a UKIP event at the Corn Exchange. All was going great, but then Pepi got some well paid work that she had to do which interrupted the process, and unfortunately family problems then meant she had to go back to Greece where she now plays a part in the political goings on there too.

I quickly got involved with a Yes stall and was there every day, meeting new friends and chatting with a diverse group of Yes and No voters.

We agreed that would continue and finish the documentary and adapt it in the future.

So where should I go from here, I wondered, where could I channel this energy and knowledge instead? I started with one stint of delivering Yes newspapers in Gorgie and was shattered for days after it. I also got to hold the Hearts Supporters for Independence banner outside Tynecastle, though.

My nephew, Rob Hart, was by this time involved and helping out on a Yes stall in the Meadows. I popped along one lunchtime to say hello and see what was happening – he wasn’t just helping, he was engaging with the passing public, imparting the knowledge he had gained as the others hand out leaflets, badges and knowledge, too.

I quickly got involved and was there every day, meeting new friends and chatting with a diverse group of Yes and No voters. I did a Saturday stall in Gorgie, but it was a bit rowdy with No voters verbally abusing us so we moved to Dalry where there was a much better atomosphere.

I then began the process of putting up Yes stickers wherever I went. Before Pepi left I hoisted her on my shoulders and she put them on all the bus trackers in Gorgie.

I went around all the Yes shops looking at what they had, picking up badges and information and sometimes leaving stuff I had that they didn’t. The Better Together shop was close by. I once steeled myself and walked in, only to be met with “what you doing in here, Rab? You are a Yes voter” – busted by a customer from the Diggers!

I mumbled something about wanting to see both sides for the documentary and I left with a few things, but it wasn’t well stocked at all.

Rob and I also got involved with an innovative idea to have two stalls for an upcoming Edinburgh Derby at Tynecastle, one each covering entrances for both fans.

Rob and I also got involved with an innovative idea to have two stalls for an upcoming Edinburgh Derby at Tynecastle, one each covering entrances for both fans.

I went to get the Hearts banner from the Yes/SNP offices at Inglis Green Road, and the guy gave me a huge box of posters with Hearts and Hibs motifs with Yes on them. It was a long walk back with the dog to my flat.

The next day we did the stall and it went really well. There was some great banter, especially for my nephew as he was stationed at the Hibs end with his Hearts scarf on.

The game went well and we all held up our Yes banners on the 18th minute. After Hearts scored I blew up six Yes ballons and released them. A red one went into the goal mouth and found itself in the net and could be clearly seen (shown all over the world by Sky Sports).

The next stall wasn’t so helpful after Hearts distanced themselves from it (Ian Murray was a director then) and some Orange Order thugs ruined it after marching that morning.

Referendum day went so quickly and I went to bed shattered and hopeful I would wake up in a independent Scotland. It was not to be… this time.

And then the day of the referendum vote finally approached, and as I took my friend to the polling booth I noticed a Yes rosette so I popped along to the Gorgie shop to see if there were any left.

I asked in for one as they were organising more canvassing. A girl said: “They are only for activsts,” and a guy from behind her, who I was on the Dalry stall with, handed me one and said: “He is an activist.”

The day went so quickly and I went to bed shattered and hopeful I would wake up in a independent Scotland.

It was not to be… this time.