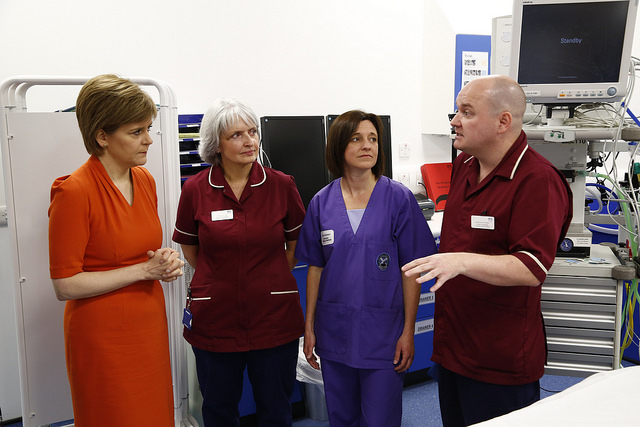 POLITICIANS, the NHS and the public need to have a ‘radical rethink’ of how NHS workforce planning is structured after the release of an Audit Scotland report which highlighted concerns, according to Professor Paul Martin OBE.

Professor Martin, the University of the West of Scotland’s deputy principle and former most senior nurse in Scotland, said the NHS is performing to a ‘satisfactory’ level, but more could be done.

Speaking to CommonSpace, Professor Martin said that the changing face of the nation’s population meant that current healthcare provisions are outdated, and he challenged everyone to look to the future to apportion a healthcare service fit for purpose in modern Scotland.

“This is probably where I step into hot water territory, because my views are not necessarily the same as other people’s.” Professor Paul Martin

He said: “This is probably where I step into hot water territory, because my views are not necessarily the same as other people’s.

Professor Martin warned that an increase in life expectancy is challenging the NHS to completely restructure frontline services, and as a result of people living longer the potential for illnesses like diabetes, stroke, heart disease, hypertension, cancer and dementia could become more prevalent.

He said: “Now, the issues around all of that are the way which we currently structure our services, and I’m not downplaying there’s a lot of effort with the integration of health and social care to try to address this.

The Health and social care integration programme was conceived during the Conservative-Liberal Democrat UK coalition governement, with an aim to cut pressure from A&E departments and care homes by providing more care at home.

The Scottish Governement is ploughing resources into the integration of services after legislation came into effect in Scotland in April 2016. The fresh approach views preventative treatement as the way forward in terms of patient care.

The Audit Scotland report released last week showed there has been a 6.3 percent increase in staff across the NHS since 2012. However, consultant vacancy rates as of March 2017 were at 7.4 per cent, while allied health professional rates were 3.9 per cent.

He said: “Is the increase in spend on agency staff a concern? I think yes, it is, it’s still a very small percentage of the overall spend on NHS staff workforce – I think it comes in at around about two per cent – but that’s not the issue.

“The issue is around ensuring the integrity of the quality of the services available to patients, and I think that’s best served if we focus on the use of the NHS bank model, rather than an agency model and they minimise the use of agency staff.”

“Thorny and challenging questions need to be asked and that is never easy, particularly for a politician as they look towards the next election.” Professor Paul Martin

Professor Martin added that the focus should be on a complete rethink of how workforce planning is carried out. He said: “This is really, really difficult for governments who are politically focused and who are always have an eye towards the next election.

“My challenge is that the performance measuring that we are currently doing isn’t shaped by what we’ve always done, rather than performance being measured by the radical change which I think the NHS and particularly health and social care require in Scotland.

“That’s not easy. I don’t think anybody should think that, but it’s a debate that needs to happen.

“And I think some difficult, thorny and challenging questions need to be asked and that is never easy, particularly for a politician as they look towards the next election – and that’s of any political colour.”

In response to the Audit Scotland report, Health Secretary Shona Robison told BBC Scotland that she accepted all of the recommendations in the report. She said: “We’ve listened to Audit Scotland’s comments about workforce planning well before they’ve produced this report.

“That’s why we worked on a very detailed workforce plan that sets out a very clear framework on how we make the improvements, how we build on the work already done, but take a real regional and national perspective on that.

“Not just for current service models, but for future service models. And that’s why the detail has been done and now will be taken forward. The pace behind that will absolutely be there.

“I understand the necessity to not just have more staff, but having the right staff in the right places, to fulfil this new model of keeping people out of hospital, keeping people in the community, and that’s what we’re giving close attention.”

Picture courtesy of The Scottish Government.