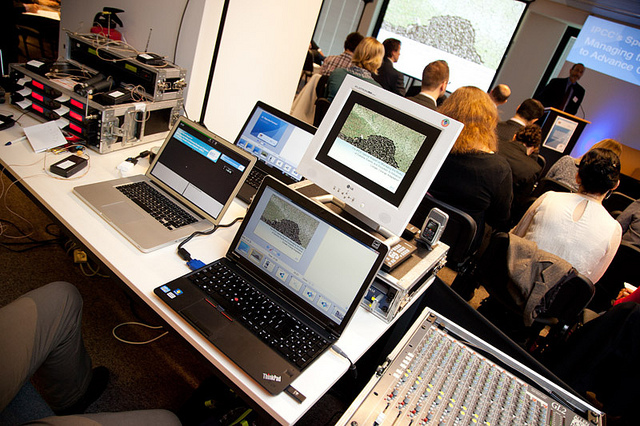 THE findings of the International Panel on Climate Change’s latest report must lead to faster action and bigger ambition on the part of the Scottish Government, environmentalists have said.

The landmark IPCC report published today [8 October] found that keeping temperature rises to no more than 1.5C above pre-industrial levels can prevent the most disastrous consequences from climate change and is still possible, but “would require rapid, far-reaching and unprecedented changes in all aspects of society”.

The report comes after recent erratic weather, including a summer heatwave, which has been linked directly to climate change. The IPCC report has been widely received as the strongest report by climate scientists yet on the potential impact of climate change and the necessity of a fundamental shift in how humans live to address the growing ecological threat.

We’ll be at #SNP18 on Monday giving out a special newspapers with stories from two potential climate futures for Scotland.

It’ll feature news from home and abroad, sports, celeb gossip and the weather, of course.

Come say hello and grab one on your way in.??️ pic.twitter.com/s9mQKdpXBB

Friends of the Earth Scotland Director Dr Richard Dixon responded to the report by stating:

“Today’s IPCC report is an unprecedented warning on climate change. It makes clear that governments have a narrow and shrinking window for action in which to avert further catastrophic temperature rises.  It shows that a 1.5C world will be a nightmare but a 2C world would be unthinkable.

“The Scottish Government’s new Climate Bill fails to deliver the ‘rapid and far-reaching transitions’ the report says is necessary.  The Bill doesn’t commit to the action necessary to limit warming to 1.5C, it doesn’t deliver on the Paris Agreement, and it doesn’t deliver on Nicola Sturgeon’s promise to ensure that Scotland plays our full part in tackling this global problem.”

Friends of the Earth were at the SNP conference on Monday handing out double-sided newspaper from the year 2040, one featuring positive news from Scotland’s climate leadership, the otherside stating ‘We failed: No way back from climate catastrophe says UN report’.

The Scottish Government’s draft climate change bill aims for Scotland to reduce carbon emissions by 90 per cent by 2050, and 66 per cent by 2030. Friends of the Earth say that Climate Change Minister Roseanna Cunningham has to go further, arguing that the 2030 target does not contain significant new commitments on carbon reduction from the 2009 target and that to be world leading Scotland has to be greenhouse gas free by the 2040s. Sweden has a zero-carbon by 2045 target.

Dr Dixon continued: “The SNP must commit to cutting our climate emissions further and faster in the next few years. That means making the decisions now to strengthen the targets in the climate bill, and committing to urgently improving the energy efficiency of all Scotland’s homes and buildings, climate friendly farming and an immediate end to any new oil and gas exploration.

“We’re standing at a crossroads and the SNP have a choice to make, where will they lead the people of Scotland? This report has spelled out what lies ahead if we continue on this path of fossil fuel use and political timidity. The SNP must act to protect Scotland, to ensure we reap the benefits of the transition to the zero carbon economy and do our fair share of the work needed to avert catastrophe.”

SNP members passed a topical motion at the annual conference on the IPCC report which “recognises Scotland as an example to the world on climate change”, stating:

“Conference views with concern today’s report from the UN’s Intergovernmental Panel on Climate Change that the earth’s temperature has already risen by 1 degree and recognises that if no very significant new policies are adopted worldwide catastrophic and irreversible change will occur.

“With Scotland’s new Climate Change Bill currently before Parliament setting a zero carbon goal for 2050 and an overall reduction of 90 per cent in all greenhouse gases, Conference recognises Scotland as an example to the world and calls for world-wide engagement to show other nations the folly of policies that will, if continued, tip the world into disaster.”

Former SNP Climate Change Minister Stewart Stevenson MSP, in introducing the motion, praised the Scottish Government’s new Climate Change Bill’s targets, but said “we will in the longer term probably have to do even more”.

The IPCC report finds that the challenge in carbon emissions reduction is not just in switching energy generation from fossil fuels to renewables, but to “decarbonise” the entire economy, especially in heating, transport and land use.

Debra Roberts, Co-Chair of IPCC Working Group II, said of the report’s findings: “This report gives policymakers and practitioners the information they need to make decisions that tackle climate change while considering local context and people’s needs. The next few years are probably the most important in our history.”

Gina Hanrahan, WWF Scotland Head of Policy, said: “The landmark IPCC report has clear implications for Scotland’s climate change response. Political leadership is the key to success and existing pledges don’t go far enough. To be ahead of the curve, we have to eliminate our contribution to climate change entirely by 2050 in Scotland. MSPs must now strengthen the Climate Change Bill currently making its way through Holyrood and collectively rise to the challenge. With warmer homes, cleaner cars and greener farming we can protect our environment, reduce fuel poverty and improve our nation’s health.”

Green co-convenor Patrick Harvie MSP said First Minister Nicola Sturgeon should respond to the IPCC report by calling a summit with “no limit set on our ambitions”:

He said: “We’ve always challenged the government to go further in its response to dangerous climate change. However this report from an internationally respected organisation makes clear the urgent need for all nations to transform their economies to achieve zero-carbon.

“Scotland wants to be seen as a leader, and that means going further and faster than merely our ‘fair share’ of effort. Crucially, Scotland can no longer take comfort in the limited actions already promised while pretending the fossil fuel economy can carry on as usual.

“The First Minister’s response should be to convene a summit of political and civic leaders throughout Scotland. The meeting should see no limit set on our ambitions, where Scottish Greens will make the case for creating a net-zero CO2 target for 2040, transformation in failing areas like transport and agriculture, and public-led investment in the post-oil economy of the future.

“Every aspect of business-as-usual politics must be challenged, and the Greens are ready to set out the positive ideas our future needs.”

The Scottish Greens were fiercely critical of a BP announcement of a new north sea oil refinery to be opened, and Patrick McCully, Climate and Energy Director of the Rainforest Action Network, responded to the report by saying it must mean “game over for the fossil fuel industry”.

McCully said: “The IPCC’s report shows definitively that it’s game over for the fossil fuel industry. The consequences of failing to meet the 1.5 degree Paris target would be catastrophic for people and planet.