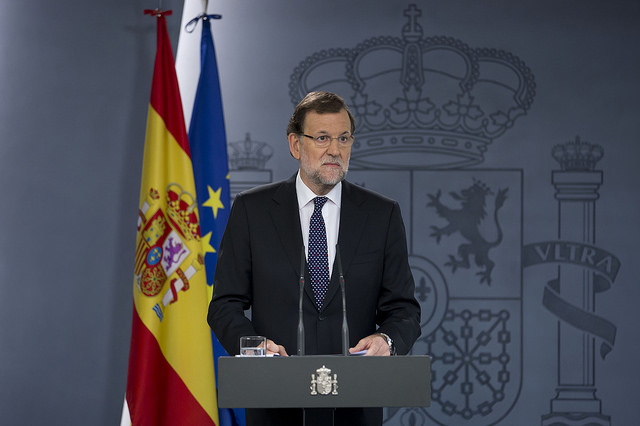 Aamer Anwar: “Until all political prisoners freed & Catalonia allowed its freedom we continue to fight”

FORMER Catalan President Carles Puigdemont has warned “there is still a long battle” ahead for Catalans to get justice, despite the ousting of Spanish prime minister Mariano Rajoy on Friday [1 June].

Rajoy’s Popular Party (PP) faced a fresh corruption scandal after a Madrid court imprisoned a former minister for 33 years on Tuesday [29 May], and the prime minister was replaced in a no confidence vote on Friday as a majority of the Spanish Parliament voted to censure him.

Under Spanish parliamentary rules the leader who brings forward a no-confidence motion must be prepared to take office if the prime minister is defeated. Subsequently, socialist party leader Pedro Sanchez became the prime minister, despite his party having less than a quarter of the seats in the congress.

Puigdemont, who was himself ousted by Rajoy in October after the Spanish Parliament voted to implement Article 155, which stripped Catalonia of self-government and established direct rule from Madrid, tweeted in response to the news: “If we wanted vengeance, today we could call ourselves satisfied. But as we want justice, today we still have nothing to celebrate. There is still a long battle and a long road ahead to defeat the injustices, which are numerous and long-lasting.”

The former Catalan President and his former ministers are in exile or jail charged with charges of rebellion, sedition and illegal use of public funds by Spanish judges for the organising of a 1 October referendum on independence, ruled illegal by Rajoy under the Spanish constitution.

Sanchez and his PSOE party supported the imposition of Article 155, but have sought to strike a different tone on the Catalan situation, which remains in deadlock despite a fresh election in December returning a majority of pro-independence Catalan members of parliament.

Sanchez said on Friday that he wanted to mend divides in Catalonia, but is under pressure from other political forces in Madrid not to soften its attitude, with leader of the viscerally Spanish nationalist Ciudadanos, Albert Rivera, tweeting shortly after Sanchez was confirmed as president: “Sánchez uses his pact with all the separatists and populists to be president at any price. Rajoy could have avoided but he didn’t. [Ciudadanos] will be a firm opposition, defending union and equality of all Spaniards.”

The leader in the Spanish Parliament of the pro-independence party Esquerra, Joan Tardà, said that Sanchez had been “complicit” in article 155, and that the party would put forward “unmissable questions” on the “violation of civil rights” in Catalonia.

Carles Campuzano, of Puigdemont’s party PDeCAt, stated that the vote was “a victory of Catalonia against Rajoy”.

“Without the strength of the Catalan votes, Rajoy would still be president. Just for this, we should be happy,” he said.

Left-wing mayor of Barcelona Ada Colau, of Catalonia en Comú, which is neither for or against independence, called on Sanchez to make bringing the political prisoners closer to their families one of his first actions. Colau said she respected that it was not in Sanchez’ gift to release the prisoners as it was now in the hands of the courts, but called on him “to make gestures towards Catalonia”.

Catalan Defence Committee Scotland, which was established in wake of the 1 October referendum to provide international solidarity with Catalan democracy, issued a statement after Rajoy’s defeat, stating:

“The removal of Rajoy is welcome. The PP Government has committed some of the worst human rights abuses seen in Europe for decades. Their clampdown on democracy can only be described as authoritarian. Their actions in 21st century Europe have been unimaginable.

“With a new Spanish Prime Minister, we hope that pathways are opening for discussions between Madrid and Catalonia. A new administration must show it is willing to break from the authoritarianism of the previous.

“Steps must be immediately taken to free the political prisoners, allow exiled figures to return without fear of persecution, and end the police oppression of activists and their basic rights.

“Long term, the powers of the Catalan Parliament must be restored and the result of the October referendum respected or agree to a legitimate, open and fair referendum so that Catalans’ basic right to self-determination is upheld.”

Clara Ponsati, former education minister who returned to work in Scotland at St Andrews University after the Catalan government was ousted, faces a court case in July to see if she will be extradited to Spain under the European Arrest Warrant for her role in the referendum last year, and potentially faces up to 30 years in prison if found guilty.

Footage of the 1 October referendum was beamed around the world after Spanish police forces attacked those attempting to register their vote, under the authority of former president Rajoy.