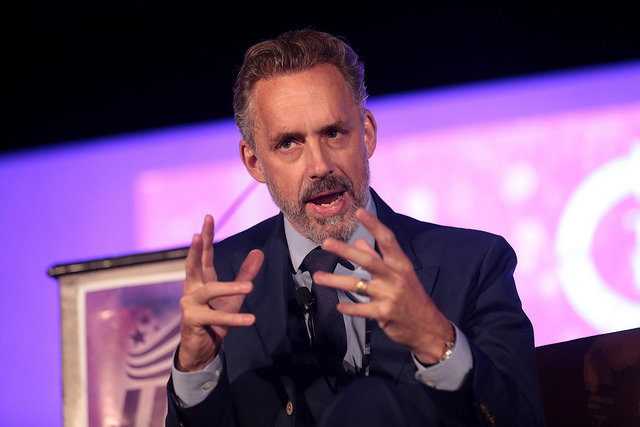 As the infamous academic prepares to speak in Scotland, we should focus less on imaginary threats and more on what the self-help guru’s popularity says about us

SPECULATIVE FICTION is a fine thing – though typically, a national newspaper is not regarded as the most appropriate venue for its publication.

Nevertheless, the Herald yesterday provided a vivid (if somewhat baffling) example of the genre by their commentator Mark Smith, prompted by the upcoming (and highly priced) visit to Scotland by the Canadian academic and alt-right darling Jordan Peterson.

This October, Peterson will be in Glasgow and Edinburgh to deliver lectures and host question-and-answer sessions concerning his bestselling book 12 Rules For Life: An Antidote to Chaos. For those mercifully unfamiliar with Peterson’s work, his self-help guide has sold an Amazon-straddling two million-plus copies, while over 200,000 people have – voluntarily, it seems – attended previous speaking engagements of his in cities across Canada and the United States.

Controversy trails Peterson, and one could be forgiven for thinking that he likes it that way. “Coming to Glasgow, with all my controversy ?” the professor of psychology tweeted several days ago, in what only an unreconstructed cynic could possibly construe as an attempt to drum up some useful outrage while tickets are still on sale.

It’s true that Peterson has faced widespread condemnation and mockery in the past: critics have described his philosophy as “a hodgepodge of Christian existentialism, Donald Trump’s The Art of the Deal and E. O. Wilson”, while he himself has been called “a kind of secularised televangelist” and, more plainly, a racist, misogynist, homophobe, transphobe and uncritical defender of Western ‘civilisation’ at its worst and most destructive.

If Peterson’s platitudes – a mixture of self-improvement, sloganeering on behalf of the Enlightenment and fulminating broadsides against the politically correct ‘radical left’ – are tricky to nail together into a coherent whole, the appeal of his message is less difficult to parse: unsurprisingly, there is a large audience delighted to be told that women are agents of chaos and why being asked to use someone’s preferred gender pronoun is creeping totalitarianism. As the American leftist commentator Felix Biederman puts it: “It flatters prejudices that they already have.”

And so, with mysterious confidence, Smith writes that any audience prepared to fork out up to £70.15 for a ticket to see the nutty professor “will almost certainly have to face the wrath of demonstrators who object to Dr Peterson’s right to speak, and our right to hear him. The protesters’ war cry will be: this man’s views are hurtful and harmful so he must not be allowed to express them. In other words, we do not want your kind of free speech here.”

Unfortunately for Smith, thus far events have not aligned with his dark imaginings: predictably, James Morton, Scottish Trans Alliance Manager at the Equality Network, and Lydia House of the anti-domestic violence charity Zero Tolerance, both condemned Peterson’s claims that men are naturally more competent than women, and that angry young men are entitled to sexual relationships and enforced monogamy with women to reduce their likelihood of committing murder. What neither of them did – and, at the time of writing, no one has done – is suggest censoring or no-platforming Peterson in the manner that Smith prophesies.

Some tenuous conclusions could be drawn from this – that the ongoing debate over free speech, who enjoys it, and to what extent it should include freedom from criticism, has been effectively weaponised by the Right, who typically characterise any scenario where students cannot be forced to listen to visiting fascists in respectful silence as an Orwellian nightmare – a con that has been swallowed by more than a few mainstream liberals.

READ MORE: Micky Clocherty: Why there’s not too much sympathy for ‘Count Dankula’ in Glasgow’s comedy scene

This is not the first time a writer at the Herald has expressed sympathy with Peterson, nor is it the first time that alarm has been raised in the Scottish press about events which have not actually happened and, in all likelihood, never will happen outside of the fevered imaginations of those at odds with the modern world.

Judging by his previous record, Peterson is a lot more sensitive to Scotland than vice versa; when Holyrood magazine made the apparently uncontroversial suggestion that Peterson should not be called upon to give comment on matters about which he lacks any credible qualification, Peterson cried foul, and was quickly joined in solidarity by professional bigot David Robertson and the extremely normal Tom Gallagher, which may not have done Peterson’s credentials as a non-crackpot any particular favours.

Smith follows Peterson and his acolytes in deeming criticism of his ideas to be censorship, but some of us remain unconvinced that a loosely-defined cabal of postmodern neo-Marxists are strangling the precious bloom of Western civilisation, so, in Smith’s words, “too bad.”

Whether or not Peterson is a deeply weird, reactionary huckster who sounds like an angry Kermit the Frog is of course a matter of opinion, upon which bystanders may draw their own considered conclusions. But as the American journalist Nathan J. Robinson notes in his appraisal of Peterson’s dubious oeuvre, defining Peterson’s ideological posturing is not the most important point (not least because his standard pose is so vague and lacking in intellectual rigour that it can assume numerous, apparently contradictory guises, should the need present itself). The more relevant question is: why has Peterson attracted such an audience?

Peterson’s visit to Scotland may tell us more about ourselves than about Peterson, and that could be more uncomfortable than anything the arch-controversialist has to say.

Explaining why precisely homophobia, transphobia, misogyny and a slavish regard for the status quo persist within Western society is a bigger argument than space permits, but one starting point may be to point to the very issue which Peterson is either willfully ignorant of or totally disinterested in –  the material factors of modern capitalist society, and which for some of the alienated and exploited among us has led them to blaming trans people for the fact there boss treats them like shit and they’re never going to own their own home.

It can be no coincidence that Peterson’s emergence has coincided with the fallout from the biggest financial crash in 70 years – the Canadian academic represents the “morbid symptoms” of a society in regression which Antonio Gramsci identified post Wall Street crash in 1929.

What the role of intellectuals should be in our society is a complicated matter; Gramsci, imprisoned by Mussolini and bereft of a Youtube channel, had some ideas on the subject. Robinson argues that we get the intellectuals we deserve; John Ganz and Stephen Klein argue that if Peterson truly is the most influential intellectual in the world, “we have reason to worry.”

Peterson’s visit to Scotland may tell us more about ourselves than about Peterson, and that could be more uncomfortable than anything the arch-controversialist has to say. Sadly, judging by the enthusiastic reception on social media from Peterson’s Scottish fans to news of his upcoming visit, the doctor will have no shortage of those prepared to shell out to receive their snake-oil in person.