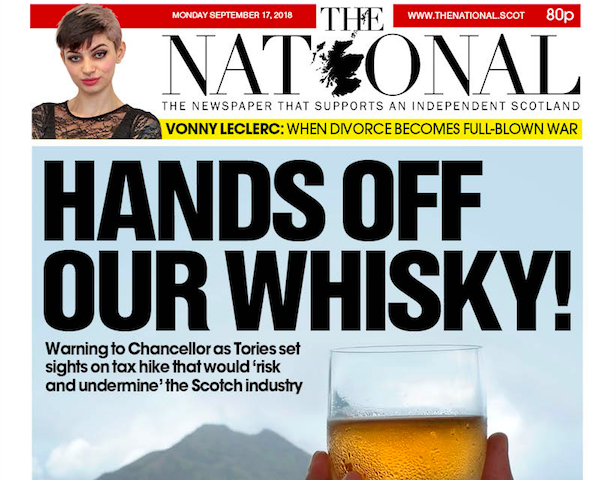 CommonSpace looks at the front cover of today’s The National and asks whether Scotch whisky really does belong to, and benefit Scotland – or whether it benefits multinational companies

THE front cover of The National today [17 September] declares ‘Hands off our Whisky!’, and warns that ending the spirit duty freeze in the upcoming UK government budget would “risk and undermine” Scotland’s whisky industry.

The story is based on comments by SNP MP Brendan O’Hara, who has backed up the Scottish Whisky Association (lobbyist for the big whisky companies in Scotland), which has claimed that an end to the freeze would harm the industry in the context of Brexit uncertainty – and that more revenue would be attained from maintaining the freeze.

O’Hara said: “Scotch whisky is one of Scotland’s major assets and a global success story. At a time of continued Brexit uncertainty and instability, we cannot risk or undermine our whisky industry by increasing the tax liability on our producers who already contribute so much.”

But is this right? Is the industry really “ours” – does it work to the benefit of the people of Scotland? And is it true that it is at “risk” from increased taxes?

Scotch whisky is a natural resource to Scotland – it can’t be produced in any other country due to protected geographic indicators which acts as a patent.

So O’Hara is right to say that a multi-billion pound export industry is a “major asset”, but three-quarters of the industry is owned by four multinational companies, and while it is a global success for them, it’s not clear that Scotland is reaping the benefit.

And is is an industry run by multinationals – Diageo is the 2nd largest drinks company in the world, and controls approximately 36 per cent of Scotch Whisky.

Diageo, which owns 36 per cent of all Scotch whisky production, is the second largest drinks country in the world and made profits last year of £3.6 billion (a 3.7 per cent rise) . One-third of its business is Scotch whisky.

Thus this is not a company at “risk” or vulnerable to being “undermined” by increased taxes. Infact, when one looks further at the numbers, Scotch Whisky is astonishingly profitable for the multinationals which run it.

A study by Biggar Economics in 2012 showed the profit margins in Scotch whisky are among the largest of any industry in the UK – 60 per cent of turnover comes back in profit. The industry has seen global sales boom since that time, increasing its profitability still further. 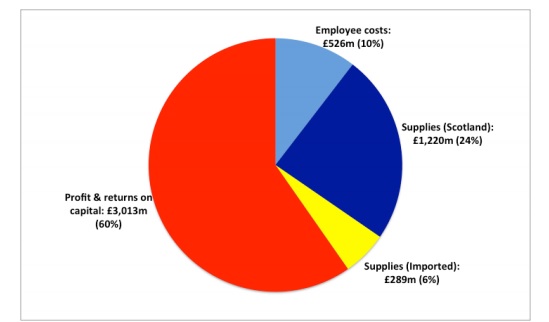 The same study found less than 7 per cent of those profits are re-invested in Scotland. How can it be “our” whisky if “we” – the people of Scotland – are not reaping the vast majority of the benefit from an enormously lucrative industry?

Neither is that money used to enrichen most of the employees of the company. In 2009 Diageo shut down its Johnnie Walker Kilmarnock plant costing 700 jobs and leading to one of the biggest protests over an industrial dispute in Scottish history, with 20,000 marching through the city to save the jobs.

In 2016 the company was at it again – this time cutting workers’ final salary scheme pensions, a move that the Unite union described as “scrooge-like”.

Spirit duty freeze and VAT is a tax on the consumers of Scotch whisky within the UK. Thus exports – the biggest part of Scotch Whisky sales – is missed out entirely.

Therefore the argument that Brexit uncertainty would make any difference to a tax levied on consumers in the UK is not logical. But, more to the point, global sales of Scotch whisky were £4.36 billion last year.

And far from being over-taxed, there is a strong case to be made that the Scottish government or local authorities should levy their own tax on the huge global profitability of the industry’s four big mulltinationals. It’s not like they can threaten to leave Scotland – the geographic protective indicators means it’s impossible to move Scotch whisky overseas..

Biggar Economics estimated a £1 production tax on each bottle of whisky – meaning on all exported bottles too – could bring in £1 billion for Scottish public services. That sum is likely to be significantly higher six years later. By comparison, the Scottish government’s recent changes to the Scottish rate of income tax bring in an additional £164 million per year.

The argument that a production tax would see the price pushed onto the consumer does not wash – even if every bottle of Scotch Whisky was £1 higher in Japan, China and the US, it is not likely to change the consumption habits of those buying what is a luxury good, bottles of which sell for well over £20.

Now think about that – a natural resource to Scotland making an enormous contribution to funding teachers, nurses, schools and hospitals in Scotland. Then it really would be “our” whisky, working for all the people of Scotland.

And one last thing: if you have any lingering doubt about just how rich Scotch whisky is making its owners, have a look at who is at the top of this year’s Scottish Sunday Times rich list. Not only is it topped by the Gordon-Grant whisky family, owner of William Grant & Sons, that family has broken the rich list record: no one who has been on the list since it began in 1989 has seen their wealth rise faster – a 5,000 per cent growth in 29 years.

Ask the Gordon-Grant family’s accountant if “our” Scotch Whisky is at “risk” from tax rises.