THE Daily Telegraph has published claims from Glasgow University professor Ronald Macdonald claiming if an independent Scotland were to establish its own Scottish currency it would need foreign currency reserves of anywhere between £30-300 billion.

Foreign currency reserves (FCR) is the money a nation-state holds in other currencies. In a country with its own currency, FCR is held by its Central Bank.

Macdonald was quoted as saying: “You are talking about a massive flip round from [Scotland having] a pretty large deficit to a surplus to start gathering these reserves.

“It implies massive spending cuts and/or tax rises. That is the elephant in the room.

“Scotland’s proportion of Bank of England reserves is small beer compared to what would be needed.”

He added that “everything in the economy has to be backed up by reserves.”

Macdonald also claimed that an independent currency would have to be pegged on a 1:1 basis with another currency – meaning its foreign exchange value would be the same as, for example, the UK Pound – to stop extreme market fluctuations in its value, which would be a “nightmare scenario”.

Tax economist professor Richard Murphy and IT and finance expert Peter Ryan both told CommonSpace that this was a “scare story”, but why?

How much foreign currency reserves would an independent Scotland need?

There is no single figure for how much foreign currency reserves a country should have, the numbers fluctuate based on various factors including the stability of the country’s banking sector and the extent to which they want to increase or reduce the country’s exchange rate. The following table shows FCR for countries in the EU with a national currency (in dollars). 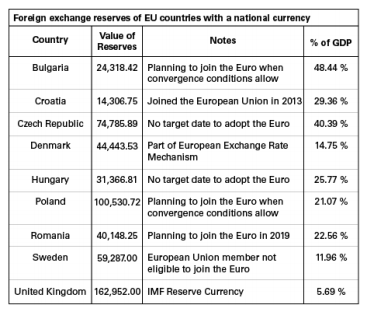 Even for the country with the most FCR, Bulgaria, if it was replicated proportionally in Scotland it would not come close to the £300bn figure (it would be around about $80bn), and the Bulgarian economy is substantially weaker than the Scottish one.

If the Swedish or Danish figure was replicated proportionally in Scotland, foreign currency reserves of $24 billion (£18 billion) or $29 billion (£21.5 billion) respectively would be required.

Many countries outwith the EU have smaller FCR than this, as the following table shows (figures in dollars). 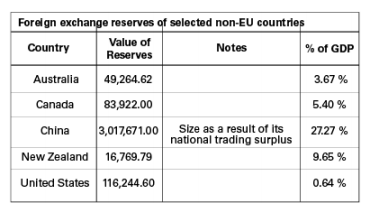 How would an independent Scotland raise foreign currency reserves?

In a paper for Common Weal, IT and finance expert Peter Ryan put forward an estimate of the amount of foreign currency reserves an independent Scotland would need at $40bn.

Macdonald appears to claim that beyond an independent Scotland’s share of UK FCR assets, which would have to be decided through negotiation, the rest of the FCR would have to be raised from tax rises or spending cuts.

In Ryan’s paper he explains an entirely different way of raising the $40bn.

Does “everything” in the national economy have to be backed up by foreign currency reserves and would anything other than a 1:1 peg be a nightmare scenario?

Macdonald’s analysis that “everything” needs to be backed up by FCR is a claim that itself cannot plausibly be backed up by comparison to other countries with their own currency.

The £300 billion figure refers to Hong Kong, but its huge FCR is due to the unique dimensions of its economy as port-city on the edge of China where foreign trade flows make up the major part of its economy. No such comparison with Scotland can be made

The reason why the vast majority of countries have FCR’s nothing close to 100 per cent of their national economy is because of the way the fiat money system works. Fiat money (meaning money that is backed by the government which issued it, rather than having any intrinsic value (like gold)) means that the credibility of modern money runs on trust, not reserves. The US as the global reserve currency has the most trust in it, which is one reason why it has the smallest FCR.

One of the consequences of the fiat money system is that any country with a free-floating currency – i.e. one that does not have its foreign exchange value pegged to any other currency – can create new money through its Central Bank. This power is an important one in giving financial markets in particular confidence in the credibility of the national currency (hence the term ‘lender of last resort’ to describe Central Bank powers).

Central Banks can and do use this power. The Bank of England has created £450bn in new money, buying up its own debt (23 per cent of Bank of England debt is now owned to itself, which means in effect it has been written off).

The idea that a country with its own free-floating currency has to back up everything with FCR and that anything other than a 1:1 peg is a “nightmare scenario” appears to presume that Central Banks do not have the modern monetary powers which they do have (something some strands of Economics theory still deny, despite the real world evidence). These powers have to be used with restraint – too much money creation can lead to inflation – but the ability to use them is nonetheless a major theme of post-crash economies, including the UK’s.

A discussion of the capacity of any national currency based purely around fiscal policy – the ability to spend money and raise taxes – presumes a restriction on financial limits which has no basis in how modern economies actually work.