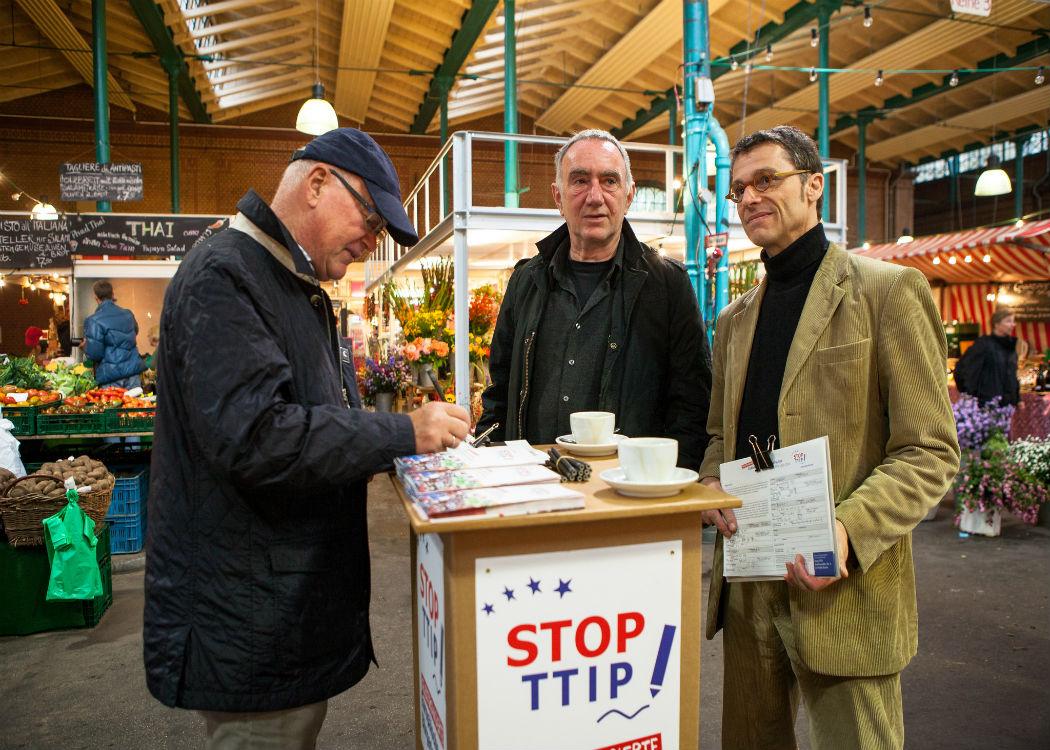 A PETITION against the proposed US-EU trade deal called TTIP has reached a record-breaking two million signatures, as a decisive vote in the EU Parliament on the controversial trade agreement looms.

The Trans-Atlantic Trade and Investment Partnership (TTIP) has been criticised by campaigners as a corporate power grab, opening the door to lowering trade standards and potentially privatisation of the NHS. Advocates argue that it would get rid of unnecessary red tape and create thousands of jobs on both sides of the Atlantic.

The ‘Stop TTIP’ petition is the largest ever on the European Citizens’ Initiative (ECI), which is supposed to act as an invitation for EU legislators to act if a petition reaches one million signatures. However, the European Commission has argued that ‘Stop TTIP’ is not an official ECI petition, a position that is being challenged by campaigners in the European Court of Justice.

Nick Dearden, director of Global Justice Now, a social justice group campaigning against TTIP, said the two million signature showed that “the EU does not have the public mandate to continue this deal.”

“People across Europe are standing up to protect our labour rights, our environmental standards and vital public services like the NHS from TTIP,” Dearden added. “Members of the European parliament must listen to the two million voices telling them to reject TTIP when voting on their position on the deal later this week.”

A crucial European Parliament plenary vote on the EU Commission’s resolution on TTIP takes place on Wednesday [10 June] and is likely to see division over the investor-state dispute settlement (ISDS), which would mean an international corporate court would resolve trade-related disputes between investors and states.

The main centre-right grouping in the EU, the European People’s Party, has tried to push ISDS through, but has been opposed by the centre-left Socialists & Democrats grouping, which initially appeared to be willing to come to an agreement but has since withdrawn support for the resolution.

The Scottish Parliament external relations committee investigated the TTIP deal and its consequences for Scotland, concluding that it remained unconvinced that enough had been done to ensure public services were protected from the deal, adding that it opposed ISDS being part of any agreement. (Click here to read more).

A roadblock to TTIP could be the Greek Government, as the leading party in the anti-austerity coalition, Syriza, has indicated that it would “never ratify” the trade deal. TTIP will need to be supported by all EU member states to pass. (Click here to read more).

The Stop TTIP petition runs until October, and can be signed here.