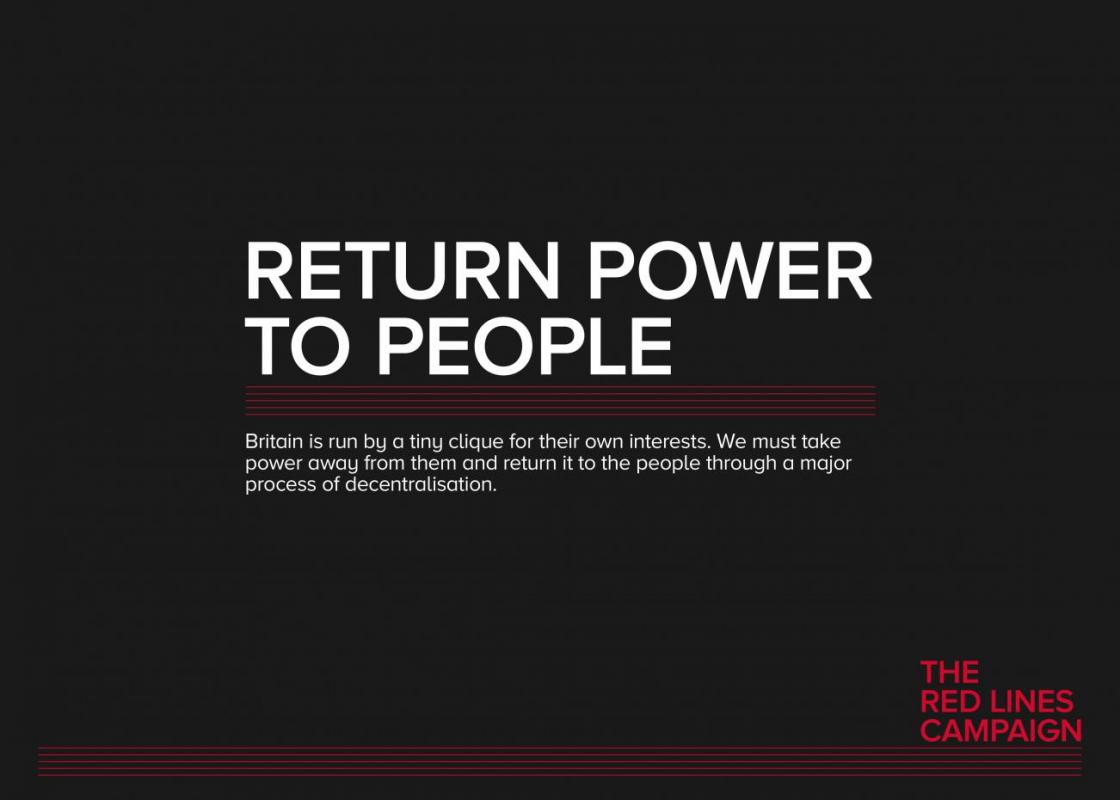 Britain remains one of the most centralised states in the world.

THIS centralisation benefits the rich and powerful elites who are most adept at influencing the political process. It also denies power to people best placed to make decisions about their own lives.

One of the key mistakes has been to mistake centralisation for solidarity. When asked, most people in Wales and Scotland prefer their devolved administrations to the Westminster government. This makes the case strong for a radical devolution of power to nations, regions, cities and communities.

The three devolved administrations have existed since the 1990s and, particularly in Wales and Scotland, command a great deal of popular support. Both administrations have had serious discussion about the opportunity to devolve additional powers. This devolution of powers has not been unproblematic though. The Scotland Act 2012 recommended a range of new powers. But these won’t be enacted until 2017. Following ‘The Vow’ by UK leaders in the week before the referendum, a further Commission on new powers headed by Lord Smith of Kelvin was set up. This produced a hotchpotch of additional powers, the implementation of which will be extremely complex. The Silk Commission on more powers for Wales was not implemented in full, despite enjoying near-unanimous support.

There should be a move to devo-max for Scotland, going well beyond the contrived recommendations of the Smith Commission.

This should involve all powers short of those reserved to nation states, such as defence and foreign policy. This will result in much more effective devolution and a clearer distribution of powers between Westminster and Holyrood, as well as finally delivering on ‘The Vow’.

In light of further devolution to Wales and Scotland, there should be further consideration of devolution to the Northern Ireland assembly.

Devolution to Regions, Cities and Communities

While there are clear proposals for devolution of further powers to Wales and Scotland, it is less clear where power should be devolved within England. At present, the Westminster Government acts both as a government of the UK on issues reserved from Scotland, Wales and Northern Ireland, and the government of England on all issues. There should be more opportunity for consideration of more powers for cities, particularly over tax raising. There should be more power for regions – particularly over policy areas like transport. And more power for communities, using tools like participatory budgeting and participatory planning.

Devolution to regions should be based on planning for integrated economic development and transport. The lack of an industrial strategy, other than growing the City of London has lead to the UK economy having a pronounced two-speed problem, with London overheating while the rest of England languishes. More powers to promote economic development, with the ability to benefit from any uplift in employment would make the case for regional democracy. Alongside stronger cities, with responsibility for tax-raising and local improvement, a renaissance in democracy at local level will both strengthen and decentralise democracy.

Communities also need to be given more powers. Where presently civil servants or local authority officials make decisions, there is a need to give more power away. Moving to a position where communities are given the ability to decide on local spending, economic development and other local priorities can help to rebuild faith in politics, and reengage people in political processes.