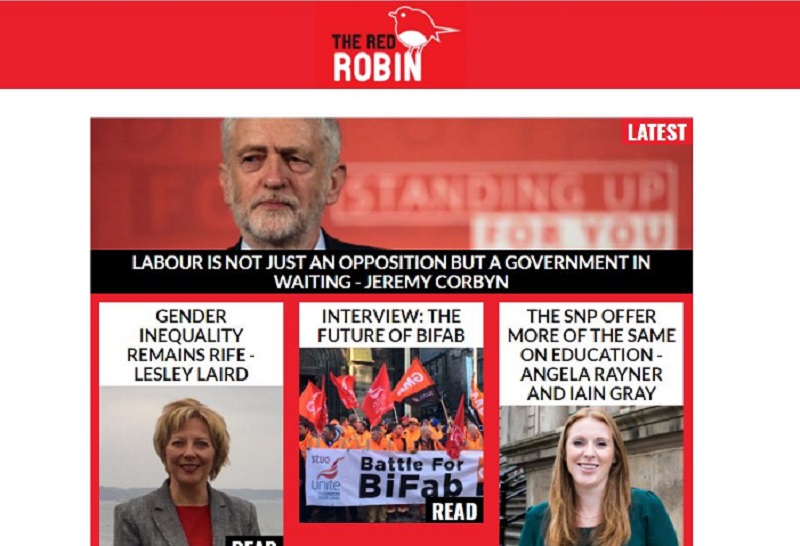 THE RED ROBIN, a new Scottish alternative media outlet which aims to bring news and views from the Scottish Labour party and the left in Scotland, has promised readers it will “find the stories powerful people don’t want you to see”.

The Red Robin has joined Scotland’s new media scene, with those behind the project telling CommonSpace it will offer exclusive news, commentary and policy analysis in Scotland from a left-wing perspective.

Nathaniel Blondel, a Scottish Labour activist and content manager for the project, told CommonSpace the website based news and views service would not just be about party politics: “We’re about trade union and left-wing organising at every level. For us, it’s about providing the movement in Scotland with the sort of coherent platform we’ve been lacking compared to down south.”

Rightwing media outlets came under fire from Jeremy Corbyn last week after they reported false claims he had sold state secrets as a “communist spy”.

After the reports were disproved, Corbyn released a video telling supporters that press barons were scared of the prospect of a Labour Government, and promising old media that “change is coming”.

The senior Tory MP Ben Bradley was forced by Corbyn’s lawyers to issue an embarrassing apology and donate an undisclosed figure for tweeting false claims about the spy story which were branded defamatory.

The Red Robin launched with “impressive output”, headed by an exclusive article from Jeremy Corbyn and policy discussion articles from senior UK and Scottish Labour figures.

Blondel, who ran unsuccessfully for Scottish Labour’s ruling executive last year, said the launch output was a bold statement of intent: “Our aim is to become the biggest news site on the Scottish left.

“Today’s output is a statement of intent: an article by Jeremy Corbyn right beside analysis on the future of BiFab.”

Writing on the website, Jeremy Corbyn said: “I am delighted to be among the first to write for Red Robin. I look forward to reading what others think about how Labour can build a Scotland for the many not the few.

“It’s complementary to existing sites and adds something new rather than reinventing the wheel.” Labour insider

“Our party and our movement is brimming with ideas and debates about the future. It is out of these discussions that we created our manifesto for the general election last year and will find radical and effective solutions to the great challenges of our times.”

The source added: “It’s complementary to existing sites and adds something new rather than reinventing the wheel.

“Too often what happens in Scottish Labour politics is dominated by reports on tactics and the day-to-day events in Holyrood and too little about the wider movement, the grassroots, and how these link up with the elected leadership, and with events in the UK and Scottish Parliaments. This presents an opportunity to change that. Richard’s allies see it as a welcome way to develop a serious space that builds on the politics he was elected on.”