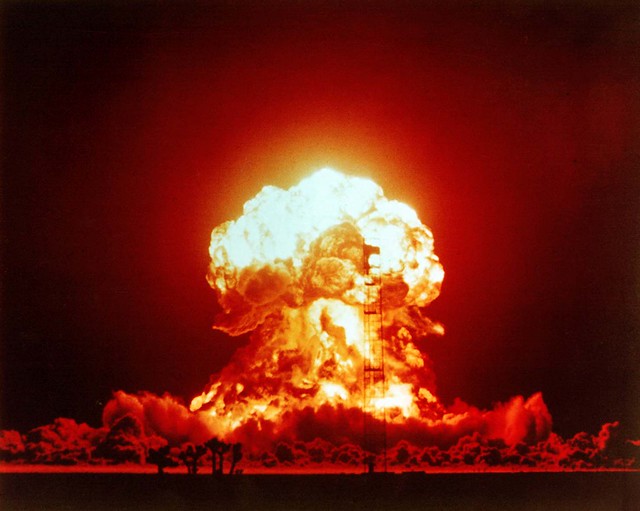 ANTI-NUKES campaigners have welcomed the decision of Renfrewshire Council to officially call for their pension fund to divest from nuclear weapons, becoming the first local authority in the UK to do so.

The resolution, passed by the Council on 9 May, calls on the Strathclyde Pension Fund, which all Council workers in Renfrewshire make contributions to, to “work towards eliminating current and future financial exposure to companies that are involved in the production or maintenance of nuclear weapons”.

Nuclear Free Local Authorities Scotland and Renfrewshire Councillor Audrey Doig said of the Council’s decision: “I am delighted that Renfrewshire Council has passed a detailed resolution on nuclear weapons divestment following on from our formal support for the Nuclear Weapons Prohibition Treaty, both of which I put forward to the Council.

READ MORE: Linda Pearson: How Scottish Councils could become a beacon for the anti-Nukes movement internationally

“In what is a dangerous and unstable world, it is really important that Councils stand up for doing things differently and encourage multilateral nuclear disarmament and divestment from companies involved in developing the ultimate weapon of mass destruction. By such actions we help to solve the ‘nuclear emergency’.”

Linda Pearson from Don’t Bank on the Bomb Scotland, which helped draw up the council resolution, said: “We applaud Renfrewshire Council for passing this important resolution in support of nuclear weapons divestment, which is the first of its kind in the UK.

“Renfrewshire’s resolution sends a clear message that it is wrong to profit from weapons of mass destruction. We hope that the fund will now act on the resolution and work towards eliminating nuclear weapons producers from its portfolio.

“With nuclear tensions at their highest since the Cold War, there is an urgent need for all Scottish banks and pension funds to stop supporting the companies that make nuclear weapons. Renfrewshire has set an example for other councils to follow and we look forward to working with them on this issue.”

A report published earlier this month by ICAN and PAX Netherlands  found that Governments possessing nuclear weapons are contracting at least £88 billion to private companies in France, India, Italy, the Netherlands, United Kingdom, and the United States for production, development and stockpiling of nuclear weapons. Just 28 companies are identified as being central to this trade in weapons of mass destruction.

NFLA say the Renfrewshire Council resolution is now being sent to member and non-member Councils across the country advocating they pass similar resolutions.

Full text of the motion reads:

• Renfrewshire Council is a member of NFLA and the Mayors for Peace, the global international body of Councils working for over three decades to promote multilateral nuclear disarmament and a more peaceful world. The Council has already passed a resolution on13 December 2018 calling on the UK government to cancel Trident replacement plans and support the 2017 Treaty on the Prohibition of Nuclear Weapons (TPNW).

• Strathcylde Pension Fund manages the pension contributions of Renfrewshire Council employees. Strathclyde Pension Fund is known to hold shares in companies that are involved in the production or maintenance of nuclear weapons or their delivery systems, including some that undertake work on the UK’s nuclear weapons programme.

• Any investments in nuclear weapons producers are at odds with the Council’s support for the Treaty for the Prohibition of Nuclear Weapons (TPNW) and the Council’s opposition to Trident renewal. Such investments also present a growing risk to Strathclyde Pension Fund. The TPNW has increased the stigma associated with nuclear weapons and companies which continue to produce nuclear weapons after the treaty enters into force will face damage to their reputation which could affect their value.

1. Work towards eliminating current and future financial exposure to companies that are involved in the production or maintenance of nuclear weapons and their delivery systems, giving due regard to fiduciary duty.

2. Council asks the Chief Executive to write to the convenor of Strathclyde Pension Fund’s pension committee to urge them to take full consideration of this resolution.

Responding to the motion, a spokesperson for Strathclyde Pension Fund said: “The Fund has yet to receive any request from the council – however, it will assess it and respond in due course.”