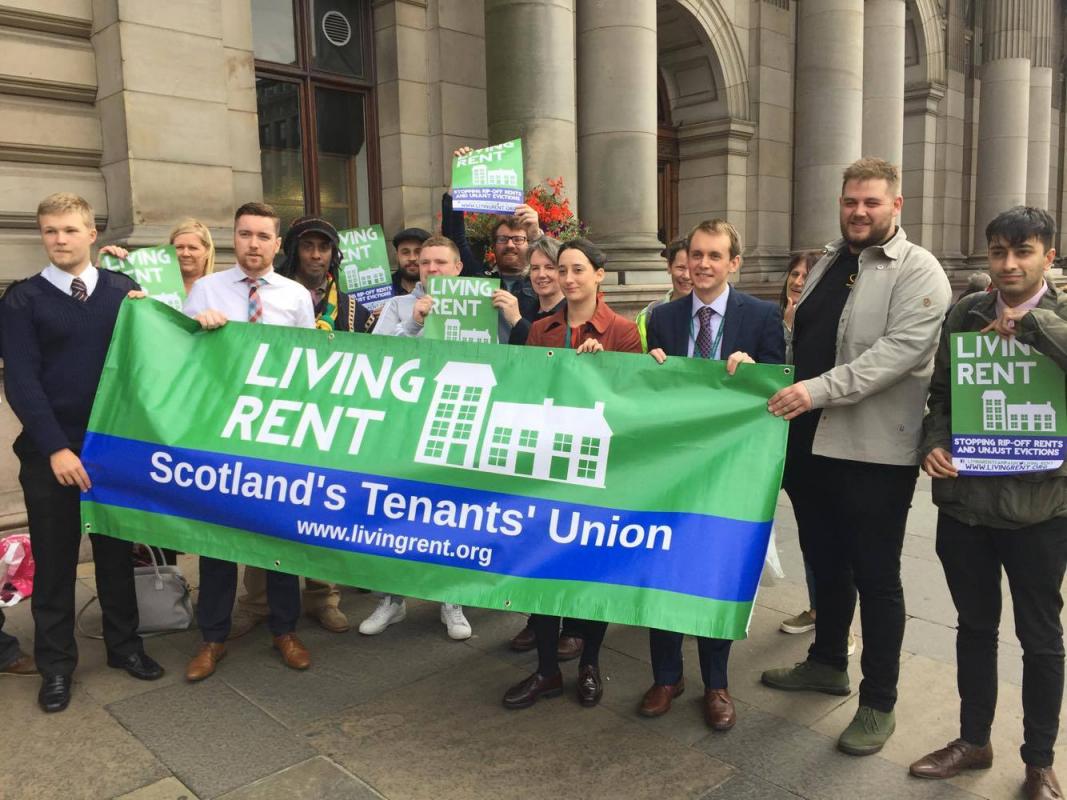 Rent controls could soon be rolled out across Glasgow.

Councillors will vote on a motion to commission a report to investigate the possibility of introducing Rent Pressure Zones across the city in chamber on Thursday.

SNP Glasgow North East Councillor Ruairi Kelly will propose the motion that is expected to pass with backing from the Green Party.

“Without trying to score political points, I would hope that it will have support across the board.” Councillor Kelly

Councillor Kelly told CommonSpace that he also had backing from Labour councillors for the proposed motion.

Councillor Kelly said: “A rent pressure zone allows us to effectively cap the increases in tenancy rent for people in the private rented sector.

“Glasgow’s seen a 24 per cent increase in the average rent over the last five years, when people’s wages have stagnated in real terms.”

He added that his motion was an opportunity for every elected member of the council to join together for a just cause.

“It’s a motion that’s going to help people across the city and, without trying to score political points, I would hope that it will have support across the board,” he said.

If the motion is passed as expected, a feasibility study will be sent to Scottish Housing Minister Kevin Stewart.

Groups such as Living Rent, Govan Law Centre and Shelter Scotland will be invited to participate in the study towards initiation rent controls.

A final decision can then be made on rent pressure zones being implemented across Scotland’s largest city.

Councillor Kelly said: “I’m hopeful that this report will bring together all the relevant information, it will get signed off and we can make some proper change in the place.”

Living Rent spokesperson Craig Paterson said: “Today we are very pleased that both the SNP and Green councillors have confirmed to us that they expect the motion to pass.

“This motion is the first concrete step towards rent controls in the city.

“We’ve heard today that an amendment by the Green Party to put a time limit on this of nine months will be enacted and agreed by the SNP.”

Paterson added that Living Rent accepts the due process for rent controls, and added it will help the council in any way it can.

He said: “We’ve had conversations with the city council leadership, who have said we will be invited to give evidence towards rent pressure zones, so we will certainly be participating in that.”

CommonSpace reported on Wednesday how Living Rent has fought the case for a member Lauren Lyttle, who is embroiled in a dispute with her landlord.

“We will continue to take on the individual rogue landlords and letting agencies.” Living Rent

The flat she lives in was condemned by Rentokil for severe dry rot problems that allowed poisonous fungus to grow through the property.

Paterson said: “We will continue to take on the individual rogue landlords and letting agencies who, as far as we’re concerned, are flouting the law.

“Whether that be with illegal fees or substandard properties, so far we’ve had a 100 per cent victory rate and we will continue to aim for that.

“As for the rogue landlords and letting agencies – those that are profiteering from the housing crisis – your days are numbered.”