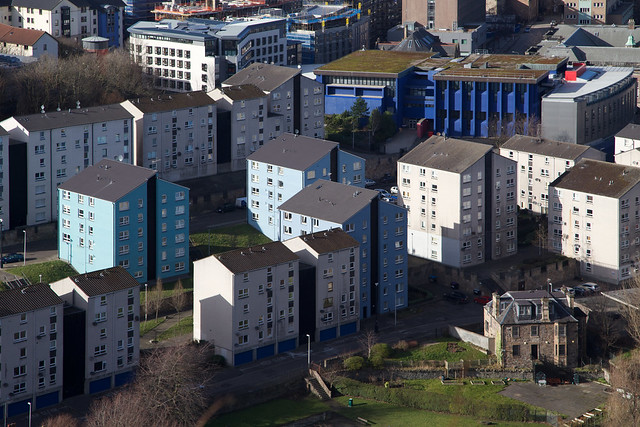 Legislation for Rent Pressure Zones was passed in 2016, but have been described as unworkable and have not been introduced in any Council area yet

HIGH housing costs have been singled out by the Edinburgh Poverty Commission as the biggest driver of poverty in the capital, as Dr Jim McCormick, head of the commission, called for rent controls to be introduced.

More than one in five people in Edinburgh (22 per cent) are living in relative poverty, with that figure rising to one in three (33 per cent) in the city’s most deprived areas.

Those figures have grown worse in recent years, leading to the commission being established in 2018 to “take a strategic overview of the scale, scope, and nature of poverty in Edinburgh and the effectiveness of activity currently being undertaken to address it”.

Dr McCormick, an expert on welfare and poverty issues in Scotland, said: “Here and now, the single biggest challenge for Edinburgh is housing costs. The pathway to poverty reduction in Edinburgh has a lot to do with getting control of rents in the private rented sector.”

Rents in the private sector have risen by more than one-third since 2010, with the surge in AirBNBs in the city – which have doubled since 2016 – intensifying the pressure on renters.

Dr McCormick, who is associate director for Scotland with the Joseph Rowntree Foundation, added: “The modern face of poverty in Edinburgh would be you’re under 50, probably working and probably renting. There was a long period of a reduction in poverty numbers driven by both the rise in employment for lone parents and also being supported by in-work benefits like tax credits. That helped to drive poverty down.

“But what we have seen in the last five years is the unravelling of that process and moving in the wrong direction.”

A housing report by ECA International in April this year revealed that Scotland’s capital has re-entered the top 50 most expensive cities for rental accommodation in Europe, sitting at 45th. Edinburgh is the 4th most expensive city in the UK.

The cost of living in Edinburgh doesn’t just affect families; students feel the pressures of expensive rent rates too.

According to the University of Edinburgh, the average monthly cost for a student’s rent can be up to £795, but when household expenses are included, the cost can reach £1,730 per month.

Victoria Costello, a student who lives in Edinburgh, told CommonSpace: “The cost of rent in the city centre is too expensive so I live on the outskirts with two other flatmates, both of which go to university as well.

“Even with the cost of travel, I struggle to maintain a social life, as well as work to try and pay my rent.

“A few of my friends from university have had to visit food banks, just because they cannot afford to pay their rent and also eat healthily on a daily basis.”

The Scottish Government introduced legislation as part of the 2016 Private Tenancy Bill for Rent Pressure Zones to be introduced in ‘high pressure’ areas of the city, but they are yet to be introduced in any council area in Scotland, with a report for Shelter Scotland finding that “unreasonable” data collection requirements had been placed on local authorities by the Scottish Government before an application could be made.

In November, Edinburgh City Council requested a review of Rent Pressure Zone legislation by the Scottish Government following a report finding that the design of the legislation was ineffective.

Following Dr McCormick’s remarks, Edinburgh City Council Housing and economy convener Councillor Kate Campbell said: “People are struggling because they simply can’t afford their rent. This is evidenced by the large number of people presenting as homeless coming from the private rented sector.”

He said: “Edinburgh as a city and Scotland as a nation needs to get a grip on the problems in the entire housing sector. Whilst some of the solutions – such as better ways of financing and building social housing – are long term, urgent problems could be fixed now with a system of rent controls.

“We recently published a policy paper with Living Rent which lays down a blueprint for a system of rent controls linked to the quality of the property being rented and the amenities surrounding it (rather than the market rate of the property).

“Such controls would be linked to the property itself rather than to the tenant or the lease which would further reduce the price uncertainty currently experienced by vulnerable renters.”

Tara Wight, from Living Rent, Scotland’s tenants’ union, told CommonSpace that the Scottish Government needs to realise that “the issues are not specific to Edinburgh”.

Wight said: ”It is clear to everyone that Edinburgh desperately needs rent controls, but the issues are not specific to Edinburgh.

“Across Scotland, sky-high rents are driving tenants into poverty, and giving them slum-like conditions for the privilege.

“It is crystal clear that the existing legislation is failing tenants – and the consequences of this are devastating. The Scottish Government needs to take urgent and drastic action to bring rents down and ensure that everyone has somewhere safe, secure and affordable to live. Strong, nationwide rent controls are the answer.”