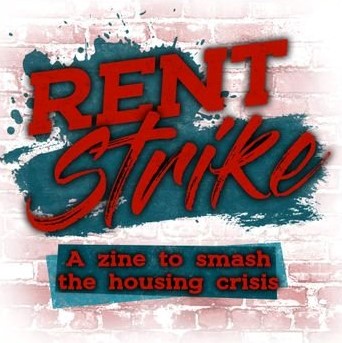 RENT STRIKE, a new magazine launched earlier this month, hopes to move beyond the immediate challenges faced by housing activists across both Scotland and the world on a daily basis, and provide a space for considering the wider issues of what housing could and should look like.

Gordon Maloney, an activist with the Living Rent tenants’ union and one of the founders of Rent Strike, spoke with CommonSpace to explain the need for such a magazine, and how he hopes it could help heal the fragmentation of the international housing movement.

While many of those involved in its inception may have a background in Living Rent, Maloney explains, the magazine is independent of the campaigning organisation, “though not for any major political reason.”

“Our ambition,” Maloney says, “is that it [Rent Strike] isn’t just a Scotland thing, but that its content could be useful for people in other countries.”

While the efforts of Living Rent activists have enjoyed “quite good press coverage generally,” Maloney says that Rent Strike’s purpose is to go beyond the immediate battles confronting the union and link practical struggle with the realm of ideas.

“What I think we want to do is get on the front foot, ignore the immediate political practicalities, and think ‘what is it we actually want?’” Rent Strike writer and housing activist Gordon Maloney

“This is an attempt at creating a space for housing activists to explore issues and learn more about housing troubles in other places,” Maloney continues. “I think there’s a general issue on the English-speaking Left that people learn from folk that they’re close to. The British Left, I think, is disproportionately influenced by the American Left in some crucial, cultural ways. So, one thing that we really want to do with this is take examples from other countries that maybe aren’t covered very well in English.

“In our first issue, there’s a piece on a wave of rent strikes that took place in Panama in 1925, and there’s almost nothing written about it in English. These are the sorts of things we’re really interested in looking at – taking examples from housing organisations in other countries and turning that into something that isn’t just hyperbolic, but really useful. Something that housing activists here can really learn from.”

Maloney points to recent developments in Berlin – where thousands took to the streets last week in protest over skyrocketing rents and to demand the expropriation of over 200,000 apartments that had been sold off to large private landlords – as an example of the kind of relevant international coverage that Rent Strike hopes to provide, and which Scottish housing activists could learn from.

Maloney says: “Most of the coverage of that doesn’t really explain what’s actually happening – it’ll give a one-line summary. What we want activists here to do is be able to understand exactly what the proposals are, what is the context of those proposals, and what lessons the housing movement and Left here can learn from.”

Maloney’s background in Living Rent has already provided him with some experience in trying to link up housing activism in different countries: “Living Rent is part of a European coalition of housing organisations – the European Action Coalition for the Right to Housing and to the City. Through them, we’ve got links to organisations in Portugal, Germany, Ireland, Turkey… What we want is, in detail, how those groups work, what are the challenges they’re facing and how they’re navigating them.”

Rent Strike’s ambition is not just to provide greater, more in-depth coverage of housing issues, but to change the way they are perceived in the UK: “Housing isn’t taken seriously as a political issue in British politics, except in the sense that house prices are talked about. There are amazing housing groups all over the world doing amazing things, but so often that’s like reinventing the wheel and they’re not very well linked up.”

Maloney also hopes that providing such a forum might motivate Scotland and UK-based housing activists to think in a more long-term way, considering their ultimate goals: “We’re really good at talking about the immediate demands – this piece of legislation, or this policy proposal – but what I think we want to do is get on the front foot, ignore the immediate political practicalities, and think ‘what is it we actually want?’ What role should social housing and the state generally play? What role does the private sector have?”

“It’s not an attempt to dictate policy, but to get people to think outside the immediate parameters a little bit more. Right now, there aren’t places to discuss this. Crucially, we want the magazine to be a mix of policy ideas and tangible ideas of real-life struggle. In the latest issue, we have an article about money-laundering and the role housing plays in that, and a deliberately provocative piece I wrote saying we should just nationalise all housing. Hopefully, all of these inform each other, and it makes everything stronger.”

Another motivation factor behind the creation of Rent Strike was the dedicated industry press, lobbying groups and PR operations that already exists to serve the interests of the landlords and property agencies that housing activists often find themselves posed against.

“One of the challenges we have with housing,” Maloney argues, “is that there’s a really well-resourced opposition, like the Scottish Association of Landlords and all these various bodies, who just churn out misinformation.

“And so, what we find with rent control, is that we speak to people who are good people, often left-wing, who want what’s best for tenants, but they’ve just bought the nonsense and think rent controls would damage supply, or mean the quality of housing would go down. At the moment, there isn’t really any publication deliberately confronting those mistruths. Living Rent is doing a lot of that, but necessarily, it’s doing more practical and immediate stuff.”

However, as one might expect for a new magazine run by dedicated activists, Rent Strike is not overburdened with financial resources. “It’s kind of running on nothing, to be honest,” Maloney admits. “There’s a Patreon where people can donate, and we’d love it if they did, but at the moment it’s just volunteers putting a lot of time and, in a lot of cases, their own money into getting it going.”

Coming up, Rent Strike will feature “a piece on financialisation and the role housing plays in the wider economy; a piece on Highland land struggles in the context of tenants’ struggles; some stuff about the details of what’s happening in Berlin… A long list.”

However, none of this has stunted the magazine’s ambition for the future: “In addition to the magazine and the online version,” Maloney says, “we do have hopes to host events and talks and things like that over the coming months, so that people can sit down and talk about these things face to face.”

Rent Strike can be read at www.rentstrike.net