Common Weal has published a major new report arguing an independent Scotland could achieve 'deficit parity' with the rest of the UK without cutting public services by rebudgeting.

The report, ‘Beyond GERS: Scotland’s fiscal position post-independence’, is authored by researcher Dr Craig Dalzell and can be read in full here.

Beyond GERS is part of the White Paper Project – a series of reports leading to the publication of a draft white paper for independence in early 2017. 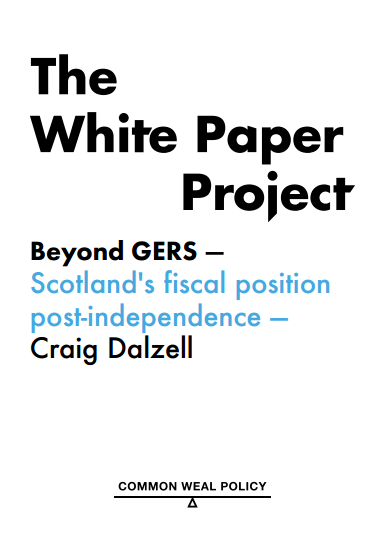 The report looks at how taking a pro-active approach to establishing state infrastructure and negotiation with the rest of UK can ensure a sound budget for an independent Scotland at the point of set-up, prior to any policy changes that could be enacted through an election.

The issue of what budget deficit an independent Scotland could have since the collapse of revenue from north sea oil has been dominated by the GERS report, with the most recent 2015/16 publication in August stating that Scotland has a hypothetical deficit of £14.8bn (9.5% of GDP).

GERS calculates this through looking at the Scottish Government’s budget on devolved issues and adding on to that what the UK Government spends and raises on Scotland’s behalf on reserved issues, like Defence and Pensions.

In Beyond GERS, an entirely different approach is taken – an independent Scotland’s budget is constructed based on effective decision-making.

First, rather than simply adding on to Scotland’s hypothetical budget the reserve spend in rUK, key items of spending are taken on their own merit and judged against what an independent Scotland would want to spend on it. For instance, whereas GERS attributes over £3bn of spending to Scotland on Defence, the actual needs of a Scottish Defence force would likely be much different and significantly cheaper, with a spend of £1.95bn identified.

The same would also be true for the raising of revenue in a Scottish tax system rather than via HMRC – up to £3.5bn of increased revenue is a modest estimate of closing the tax gap (the amount of tax that should be paid but isn’t) by just one-third.

Second, GERS does not (and is not intended to) account for financial rearrangements that would occur on transition to an independent Scotland that would have a big effect on Scotland’s budget. The amount that would be saved from re-profiling Scotland’s share of the debt as well as the UK’s responsibility for pension liabilities is two areas that are accounted for in Beyond GERS that are not up for consideration in the official GERS report.

Finally, relocating items of government to Scotland would have significant multiplier effects which would be expected to boost revenue further. A beefed up civil service could expect to bring in an additional £719m, for instance. None of this is accounted for in GERS.

Where the gains come from:

The combination of these approaches to building a hypothetical independent Scotland’s budget at the start of its life means that a “conservative estimate” of what Scotland’s deficit could be is £5.6bn (3.5% of GDP). This would be proportionately smaller than the UK’s current deficit at 4% of GDP. All of this is prior to any further policy changes that could be made after an independent Scotland’s first election, such as changes to tax policy or increased revenue from higher wages or reduced inequality, which could boost Scotland’s fiscal position further.

As part of the White Paper Project, Beyond GERS is supported by a series of other papers looking at specific issues in detail like debt & assets (already published), closing the tax gap, a Scottish Defence force and more.

“It is important that, collectively, this movement produces a robust and inspiring case for independence. We need to start building momentum now.” Robin McAlpine

Robin McAlpine, Common Weal Director, said of the report: “The independence movement has been too passive on Scotland’s finances and particularly GERS. There is no question Scotland could produce a budget to operate as an independent country with our current levels of public services and a perfectly manageable deficit. We’ve let anti-independence voices make all the running and we’ve been far too defensive. The health of public finances is crucial to winning an independence referendum and we don’t have forever to get on the front foot. With this report we think we’ve reached ‘deficit parity’ with the rest of the UK without cuts to anything other than defence. It is important that, collectively, this movement produces a robust and inspiring case for independence. We need to start building momentum now.”

Commenting on the report, author Dr Dalzell stated: “Whilst GERS may offer a reasonable, though still limited, snapshot of the financial health of Scotland within the United Kingdom, even major analysts like Deloitte now recognise that it says nothing about the finances of an independent Scotland and the debate surrounding Scotland's constitutional arrangements is ill served by continuing to assume otherwise.

“By attempting to account for the economic and financial impact of the necessary changes which will come as a consequence of independence, such as the relocation of currently reserved government functions to Scotland, this ground up construction of a "first year" independence budget – which neither relies on significant oil income nor on the complex accounting of 'Barnett Consequentials' – demonstrates that the very act of independence will result in several billions of pounds worth of savings and additional revenue paving the way for Scotland to reach "deficit parity" with the current UK budget or to improve even further.

“It is important for the independence debate that those involved expand their thinking about Scotland beyond the picture of the situation within the UK. It is time to start thinking beyond GERS.”