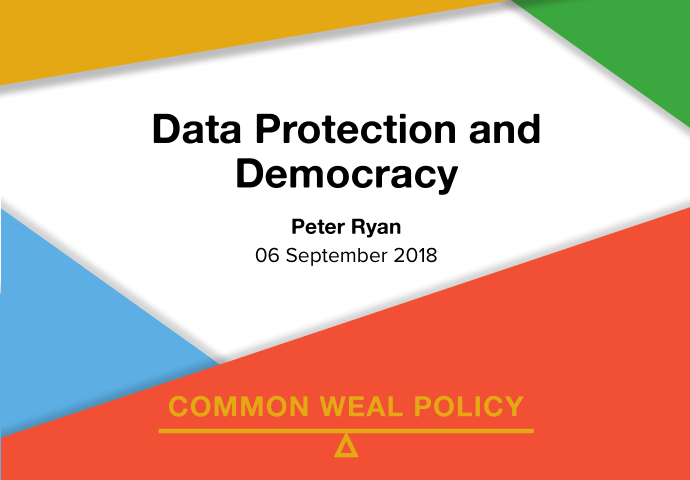 “Data Protection and Democracy”, written by Peter Ryan, examines the expansion of data and use of data into our lives. The paper can be read in full here.

This expansion of data use can be for the public good – Ryan highlights the example of the deleterious impact of smoking on health as something that was only uncovered by collecting and comparing the health data of smokers and non-smokers.

However the expansion of the collection of public data and its use by private companies has been drawing concern. Social media like Facebook presents itself as “free” to users but has resulted in the collection of huge amounts of personal data on those users as well as their connections to each other.

This has resulted in the development of apps which take the form of petitions or “personality tests” which harvest such data and use it to “profile” the users.

Infamously, the company Cambridge Analytica developed such user profiles into a tool that it could use to allow others to “microtarget” users with political adverts, “fake news” and propaganda. This has led to the possibility of voters deemed to be responsive to such messages being specifically targeted with dubious political adverts whereas others may be explicitly excluded from seeing said adverts and reacting to them. This has introduced significant vulnerabilities into our democracy and may allow companies and foreign organisations to unfairly and unduly influence the electoral process.

The new European General Data Protection Regulations (GDPR) have greatly restricted the way in which user data can be collected, stored, used and distributed with other organisations but further steps can and should be taken to protect our democracies.

The report makes a series of recommendations towards this goal including: