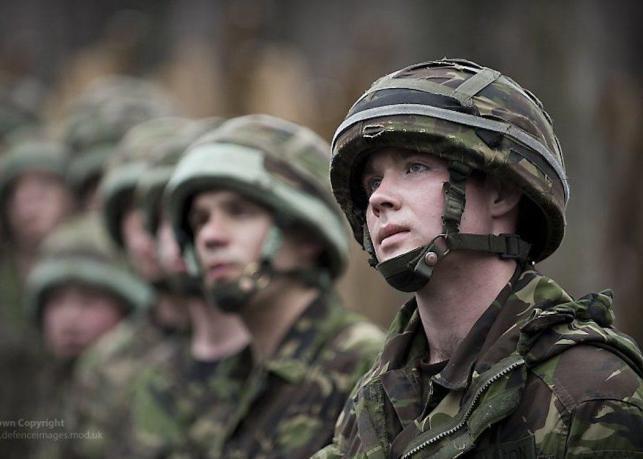 CRITICS OF BRITISH MILITARY recruitment have pointed to newly released reports providing evidence that the Ministry of Defence targets working class young people and that the army culture is linked to higher rates of violence “in daily life”.

Two separate releases within a week have prompted calls for a rethink of British militarism, which includes the recruitment of people as young as sixteen.

First, a military briefing document on its ‘This Is Belonging’ conceded that its target audience is 16-24 year old “C2DEs” – a term for the lowest social and economic groups. Revealed by Child Soldiers International to The Guardian, the document disproved previous claims from the military that recruitment is not aimed to lure working class audiences into signing up for war and military action.

Rachel Taylor, the charity’s director of programmes, said: “What’s very clear from the document is that the army is deliberately and strategically targeting young people from deprived backgrounds who have limited options in life.

“It’s not about presenting the military as one of many options. It’s about exploiting people who don’t have a lot else going for them and taking advantage of that lack of opportunity to fill the ranks usually for the most dangerous and badly paid roles.”

While the British military claimed the project is part of advertising to “reach a broad audience”, recruitment tactics and military training also faced criticism from a second report.

‘The First Ambush? Effects of army training and employment’, drawing on veterans’ testimony and around 200 studies in the UK and US, found damning evidence linking aggression to military recruitment.

The report found that military personnel are “more likely than civilians to behave violently in daily life” and were “twice as likely to drink heavily”. Rather than being the fault of the individual recruits – who often face limited support for the series pressure and trauma from military action and sustained physical and emotional stress – the report highlight that the structure of training “reinforces several risk factors for violent behaviour, including antagonism, aggression, hostility to other groups, and traditionally masculine norms.”

“Other consequences of army employment include elevated rates of mental health problems and unemployment after discharge, as well as poorer general health in later life,” according to campaign organisation Veterans for Peace (VFP).

VFP released the story of Dan, to coincide with the report. Dan joined the army in 2006, at 18, having grown up in an area of high unemployment. He was told that military discipline would keep him out of trouble. After training he deployed to Iraq, and when he came home he assaulted a warrant officer. He was sentenced to 18 months in military prison.

“The army’s training changed me. It made me more aggressive as a person. I shouldn’t have attacked that warrant officer, but I believe I wouldn’t have if that training hadn’t changed me in the first place. After the conviction the army wouldn’t support me, my mental health deteriorated and I was left feeling isolated and alone. I resorted to alcohol abuse and became homeless for a year, and I have suffered with chronic PTSD. I really believe that underlying all my problems was the effect of the training I was put through when I joined the army.”

Post-Traumatic Stress Disorder is a condition common is service people who have experienced the impacts of war – for instance patrols impacted by IED (improvised explosive devices) in Afghanistan and Iraq.

“I hear stories like Dan’s all the time,’ said Ben Griffin, a former SAS soldier and the National Coordinator of VFP UK. “The report we are publishing today confirms that army training increases violent behaviour and heavy drinking even before recruits are sent to war, contradicting the common assumption that joining the army reduces antisocial behaviour. We want to increase the public understanding of the impact of military service, so that people can make better informed decisions.”

Campaigners in Scotland want military recruitments in schools to be controlled with new rules of transparency and information balance in regards to military activists. A campaign is also underway to pressure the UK Government into raising the recruitment age to 18.