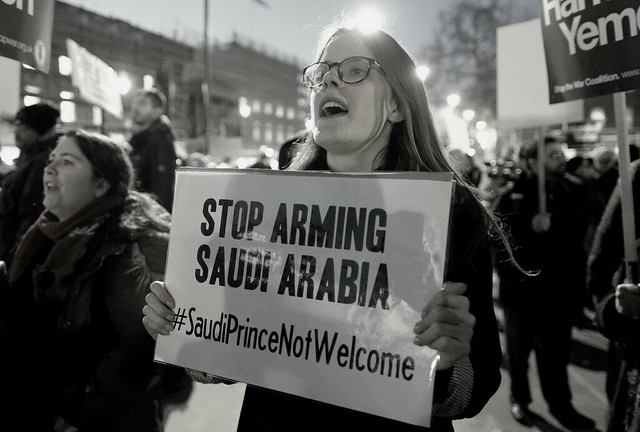 “It is possible that more cases will come to light,” Truss said after admitting two further export licences were granted for shipments that could be used in the Yemen war

INTERNATIONAL trade secretary Liz Truss has faced fresh calls to resign after admitting that further breaches to the court of appeal’s ruling against arms sales to Saudi Arabia had taken place.

Responding to an Urgent Question from SNP MP Chris Law, Truss today [29 September] revealed that the UK Government had unlawfully approved two further export licences to the Saudi regime for shipments which could be used in the ongoing war in Yemen.

Since the Yemen war began in 2015, the UK Government’s arms sales to Saudi Arabia have totalled over £4.6 billion. However, the court of appeal’s landmark ruling in June found that such sales were illegal, as they could potentially contribute to violations of international law. The critical judgement also accused British ministers of ignoring the likelihood that Saudi airstrikes against civilian targets in Yemen have already broken international law.

In the aftermath of the judgement, Truss’s predecessor as trade secretary, Liam Fox, pledged on behalf of the UK Government to halt Saudi arms sales pending a review. However, earlier this month Truss admitted that this pledge had been broken, acknowledging two “inadvertent” breaches had taken place, leading to calls for her to resign from SNP MP Alison Thewliss and shadow international trade secretary Barry Gardiner.

After confirming that two further export licences had been granted, Truss added: “It is possible that more cases will come to light.”

“The Tory government is either completely incompetent or it is deliberately breaking the law with impunity.” SNP MP Chris Law

In the wake of today’s revelations, Chris Law, who sits on the Committee for Arms Export Control, commented: “Liz Truss must resign or be sacked. Her position is now completely untenable – after the shock admission of further unlawful breaches of the court ruling against arms sales to Saudi Arabia on top of two previous contraventions.

“The Tory government has repeatedly said it has one of the most stringent arms exports regimes in the world – yet this further violation of the court embargo makes a mockery of this claim that the government today still had the gall to make.

“Weapons sold to the Saudi regime have had a devastating impact on the people of Yemen – a conflict that has killed thousands and left millions suffering in the biggest humanitarian crisis in the world. Since the war in Yemen began, the UK government has shamefully put profits before peace – trading almost £5 billion of weapons to Saudi Arabia, but providing only a tiny fraction of aid funding to Yemen in return.

“These arms sales must end – and the Tory government must be held to account. Another hollow apology simply won’t cut it. If the Tories had any honour Liz Truss would be gone by the end of the day.”

“The government is in denial over how badly regulated the UK arms industry actually is.

“As we’ve seen with arms exports to Saudi Arabia, the UK has failed to take the proper precautions when greenlighting arms sales.

“Billions of pounds worth of military hardware has been sold to Saudi Arabia and its coalition partners despite the clear risk that this could be used by the Saudi-led military coalition in Yemen to carry out indiscriminate attacks on homes, hospitals and market-places.

“The UK needs suspend all further arms sales to Saudi Arabia for use in Yemen while carrying out a root-and-branch overhaul of its thoroughly discredited arms control system.”

Focus on the UK’s relationship with Saudi Arabia has become particularly acute in light of Prime Minister Boris Johnson’s claim that there is “a very high degree of probability” that Iran was responsible for an attack on Saudi oil facilities earlier this month, raising the possibility that the UK could become militarily involved in protecting the Saudi regime.

Speaking to CommonSpace, a spokesperson for the Stop the War Coalition commented: “Boris Johnson will do everything to stick close to Trump over Iran – and Trump is sending troops to Saudi Arabia, following his tearing up of the Iran nuclear deal and his imposition of vicious sanctions. More war in the Middle East is the last thing anyone needs – and we have to oppose any move by the British government to give comfort to the US neocons and their allies.”