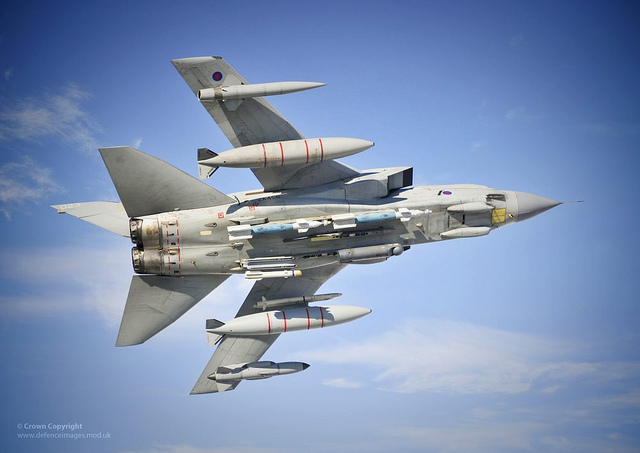 269 – That’s the number of Syrian refugees which could have been resettled in the UK for the same cost as the 8 missiles the Royal Air Force (RAF) fired at a Syrian Government target in the early hours of Saturday 14 April.

The UK Government’s contribution to the strikes on Syria alongside the US and French coalition was to fire eight ‘stormshadow’ missiles at one of Bashar Al-Assad’s research facility’s near Homs, alleged to be a chemical weapons site.

That figure does not include the cost of the four Tornado GR4s which were used by the RAF in the operation, at a cost of £35,000 per flying hour. The lifetime costs of a Tornado GR4, which have been operational since the 1991 gulf war, are expected to come to £245m.

Prime Minister Theresa May has said there was “no alternative” to the strikes on Saturday, which came after an alleged use of chemical weapons in Douma by the Syrian Government in Douma on 7 April, a claim it strenuously denies. “This persistent pattern of behaviour must be stopped – not just to protect innocent people in Syria from the horrific deaths and casualties caused by chemical weapons but also because we cannot allow the erosion of the international norm that prevents the use of these weapons,” she said in wake of the strikes.

The urgency of the attack has been questioned, coming just hours before chemical weapons inspectors entered Syria.

In case you missed it: In response to media queries, the Spokesperson for the Organisation for the Prohibition of Chemical Weapons (OPCW) confirms that the #OPCW Fact-Finding Mission (FFM) team is on its way to #Syria and will start its work as of Saturday 14 April 2018. pic.twitter.com/IZUIpg2DsZ

Labour MP David Lammy has raised doubts about claims that the UK Government’s motivation in bombing Syrian Government targets are humanitarian, due to the government’s record on resettling Syrian refugees. Lammy referred to a House of Commons vote against an amendment to support the Dubs Scheme which would have seen the UK Government keep to its prior commitment to take in 3000 child refugees.

The Government has so far only taken in 480, after closing the scheme in February 2017, a figure described by the Home Affairs Committee as “completely inadequate”.

Lammy tweeted: “Any MPs supporting military action and air strikes: do you remember the night in Spring 2016 when Parliament voted down the Dubs amendment to take in a few thousand children fleeing war and bloodshed in Syria? Reflect on why you now prioritise air strikes over taking in refugees.”

The UK has resettled half of the 20,000 Syrian refugees it has promised to re-settle by 2020, but that figure is proportionally well short of what European countries have committed to in a EU quota scheme for resettlement which the UK Government opted out from.

The Syrian civil war began in 2011 and has been the largest source of a refugee crisis in the Middle East and North Africa which is the worst since at least the second world war.

In 2016 the UN found that six million Syrians were internally displaced and five million were refugees, nearly half of the entire Syrian population.

The United States, leading force in the coalition which struck Syrian government targets on Saturday, has resettled just 11 refugees this year.

The cost to the UK taxpayer of RAF air strikes in Iraq and Syria since August 2014 is £1.75bn, which could have resettled 74,722 Syrian refugees.

Just one in five Britons said they supported UK air strikes in a poll published by The Times last week.