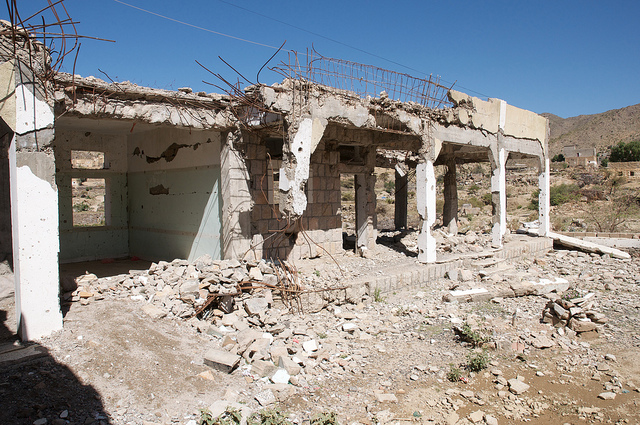 SCOTTISH GOVERNMENT claims that its support for the Defence sector is focused solely on business diversification and non-military purposes has been thrown into doubt again, as minutes of a key industry leadership body involving major arms companies show government agencies did not raise the issue of Defence diversification in any of the meetings over a two and a half year period.

The minutes – seen by CommonSpace via an FoI – from February 2016 to December 2018 highlight detailed discussion of the strategy of the Aerospace, Defence, Marine and Space Independent Leadership Group (ADMS ILG).

Three Scottish Government agencies – Scottish Enterprise, Scottish Development International and Skills Development Scotland – sit on ADMS ILG, as well as multi-national Defence companies including Thales, Babcock International and Leonardo, all three of which have been linked to Saudi Arabia’s three-year bombing campaign of Yemen, which has created the world’s biggest humanitarian crisis. The SNP has opposed the UK Government’s licensing of multi-billion arms sales to Saudi Arabia.

However, the minutes suggest that at no point was the issue of business diversification and non-military uses raised by the agencies or anyone else on the leadership group – which contains a specific Defence sub-group – despite First Minister Nicola Sturgeon’s claim on 31 January that this was what “any support” for the arms industry from the Scottish Government and its agencies was about.

READ MORE: Linda Pearson: If the Scottish Government are serious about defence diversification they have to prove it

In 2016 ADMS ILG, facilitated by Scottish Enterprise, launched its five year strategy which stated that demand for products that address “the changing face of global threats” represents “potentially huge business opportunities for Scottish companies”. In the foreword, then Minister for Business, Energy and Tourism Fergus Ewing praised the strategy for setting out “a clear growth plan that is pragmatic in its approach” and is in “clear alignment with Scotland’s economic strategy for increased internationalisation, innovation, investment and inclusive growth”.

The strategy recommends that the international arm of Scottish Enterprise, Scottish Development International (SDI), be “encouraged to work with the ILG and sector to take a proactive approach to the development of export and investment opportunities”.

The arms industry’s lobby group, ADS Scotland, was involved in the drafting of the strategy, and the minutes from a June 2017 meeting states that “it was noted how refreshing it was that ADS and the ADMS ILG are so closely aligned in all areas.”

The agency has previously helped companies based in Scotland to exhibit at the world’s largest arms fair, Defence and Security Equipment International (DSEI), and at Farnborough Air Show, which features predominantly military equipment. Minutes of the February 2016 AMDS ILG meeting said that “[a]ny company wishing to attend the Farnborough Air Show can approach SDI” and minutes from the June 2018 meeting show that Highlands and Islands Enterprise funded Scotland’s stand at the Farnborough Air Show that year.

In the update on the Defence sub-group on 12 December 2017, it is noted that: “There has not been as much progress as hoped due to business concerns. Scottish Enterprise/Skills Development Scotland offered to assist in this endeavour.”

Responding to the revelations, Scottish Greens international affairs spokesperson Ross Greer MSP said that it showed there was “no evidence” that government support for the arms industry was going towards diversification.

Greer told CommonSpace: “The SNP’s excuses for supporting arms dealers have yet again collapsed in the face of the evidence.

“I’ve raised these issues repeatedly over recent years and after every revelation they have responded with the laughable claim that their handouts of public money are for ‘diversification’. There is no evidence that this is the case and indeed some of the arms dealers they have lavished with hundreds of thousands of pounds have actually increased the share of their overall business which is dedicated to this industry of death.

“For a party which talks tough on the arms trade at Westminster, the SNP have shown breath taking hypocrisy as a government here in Scotland, actively supporting corporations who profit from warfare, many of whom are international multi-billion dollar businesses who do not need handouts from the public purse.

“The public see right through this charade. They want investment in public services at home and Scotland’s leading international development work abroad, not funds diverted to support arms dealers implicated in war crimes committed against children.”

Andrew Smith of Campaign Against Arms Trade said: “The Scottish Government has questions to answer. It has rightly identified the importance of defence diversification, and that should be key to policy and central to its discussions with industry.

READ MORE: Andrew Smith: Raytheon influence is an institutional problem, not just a party-political one

“UK-made arms, including those produces in Scotland, are having a devastating impact in Yemen. The Scottish Government should not be using its position to boost companies that profit from war and conflict.”

A Scottish Government spokesperson defended its position, arguing that “it does not provide funding for the manufacture of munitions – either directly or via Scottish Enterprise.”

The spokesperson added: “The support provided is focused on helping firms to diversify and develop non-military applications for their technology and ensure Scotland continues to benefit from the thousands of jobs in the defence, aerospace and shipbuilding sectors.

“We are very clear that we expect the UK Government to properly police the export of arms and investigate whenever concerns are raised.  However, while defence is reserved to the UK Government, it remains important to have appropriate defence and security capabilities maintained in Scotland.”

“The SNP’s excuses for supporting arms dealers have yet again collapsed in the face of the evidence.” Green MSP Ross Greer

A Scottish Enterprise spokesperson said: “The minutes of the ILG meetings typically reflect discussion around wider ADMS priorities, as outlined in the latest ADMS industry strategy (2016).

“All core defence activity is already fully funded by the MoD. Therefore, all of the activity that we (Scottish Enterprise, Scottish Government and partners) are supporting is related to diversification in to civilian applications to create new jobs and economic impact in Scotland.”

The spokesperson also highlighted page 13 of the ADMS 2016 strategy document, which states that one of the 24 recommendations for the Defence sector is to: “Develop a coordinated approach to support for ADMS companies that brings together, in a consistent and easy to access way, the full range of existing and future support and advice mechanisms that are in place to support company diversification, product development, international market access and specialist advice on regulatory and compliance issues from Scottish and UK sources.”

That strategy document makes no mention of human rights, and it sets “internationalisation” as one of its key objectives, with a target of increasing exports to 70 per cent of turnover in the sector.

READ MORE: Analysis: Britain helped create Saudi Arabia – the Establishment won’t give up their influence without a fight

In January, the Sunday Mail revealed that the Fife-based Raytheon arms firm was receiving free “accounts management” services from Scottish Enterprise, and had also received a £91,009 grant to fund “reviewing capacity” at its plant.

The paper revealed last August that laser-guided missiles built at the plant had been used by the Saudi Arabian regime in its bombing of Yemen, including civilian infrastructure such as schools and hospitals. International human rights observers say the bombing campaign has been the main contributor to mass starvation in the country, in what has been described as the worst humanitarian crisis since the second world war.

Since 2014, Raytheon has had around £200,000 in financial support from Scottish Government agencies, with the arms sector as a whole receiving around £20 million in funding over the past decade.

UK Foreign Secretary Jeremy Hunt is expected to tell German Chancellor Angela Merkel in Berlin on Wednesday [20 February] that it should not seek to prevent arms sales to Saudi Arabia from big Defence companies, after Germany said it would no longer sell arms to the despotic regime following the killing of journalist Jamal Khashoggi last November.