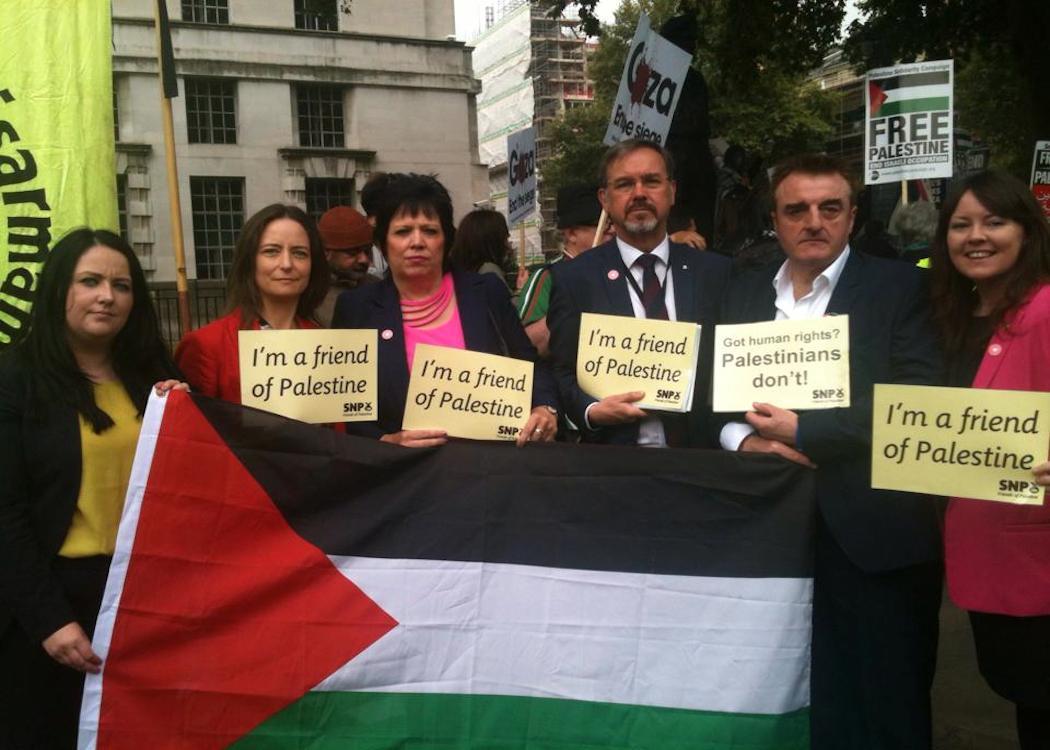 Over half of SNP Westminster parliamentarians support Palestinian rights campaign

OVER HALF of Scottish National Party (SNP) MPs have given their backing to a new party campaign group which advocates justice for the people of Palestine.

Following requests and research by CommonSpace, 30 MPs out of 55 current SNP MPs have now declared support for the SNP Friends of Palestine group.

The campaign, like the Scottish Government, supports the recognition of an independent Palestinian state. The group also calls “for an end to the Israeli occupation and withdrawal from and removal of all illegal Israeli settlements and support the Palestinian ‘Right of return’.”

A group of SNP MPs recently supported protests against the Israeli Prime Minister Benjamin Netanyahu over war crimes cases following the bombing of Gaza in 2014.

Andy Murray, lead organiser with the group, told CommonSpace: “We warmly welcome the growing support from members throughout the party including a significant number of elected members both in Holyrood and Westminster.

“Over the next few months, starting at our party conference in October, we want to make more members aware of our group, and bring to their attention the situation in Palestine right now.

“We will highlight specific issues such as the continued construction of illegal Israeli settlements in occupied Palestine, the worsening treatment of Palestinian’s living under Israeli military occupation, and a raft of brutal legislation passed recently by the Israeli Security Council which, for example, can condemn Palestinians to a minimum of 4 years in prison for simply throwing a stone.”

The campaign group launched less than a year ago, ahead of the SNP 2015 spring conference.

Campaigners point to decades of encroachment on Palestinian territory, regular bombing campaigns and the enforcement of a blockage by the state of Israel as evidence of repression.

International demands – including from the United States – for an end to the building of Israeli illegal settlements have been ignored, yet the UK and US have continued to arm the Israeli regime.

Dr Lisa Cameron MP, a member of Westminster’s International Development Committee, told CommonSpace: “I certainly do agree with the aims of the group and support ongoing efforts to achieve the peaceful coexistence of Israelis and Palestinians. I also believe in the EU position of a two-state solution, based on the 1967 borders.

“Scottish Ministers have pressed the UK Government to use its influence to promote self-determination for Palestine and help relieve suffering in the occupied territories.”

The Oslo Accords – signed between 1993 and 1995 – led to a period of diplomatic negotiation between the Palestinian Liberation Organisation and the state of Israel. However, recent efforts have been thwarted by military campaigns and political flux.

The 30 MPs to express support for SNP Friends of Palestine are listed below.

The SNP conference this week will include a fringe event with the Palestine Solidarity Campaign .