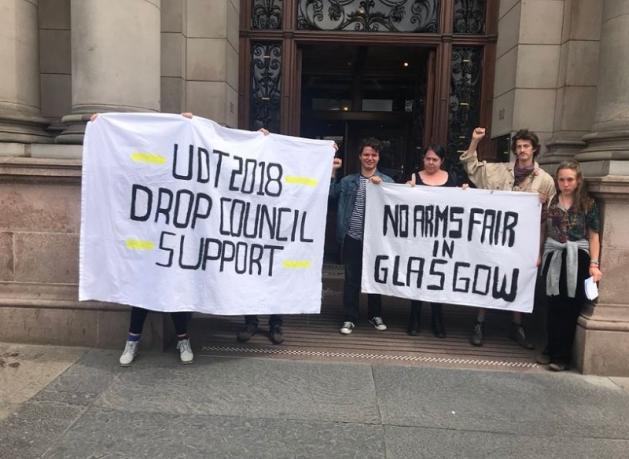 GLASGOW CITY council faced renewed criticism over failure to distance itself from the city’s upcoming Under Defence Technology (UDT) conference after revelations that a student recruitment drive led by Trident experts will take place at the event.

The session, labelled “Year of Engineering Talk 2018 – Why should I work for defence?”, will be held on the second day (27 June) of the conference at the Scottish Events Campus.

The conference has already been the subject of considerable controversy, with peace campaigners calling on the council to withdraw its support from the event which was bid for and set in motion by Glasgow Life, an arms-length charitable body which delivers council services. SNP Council deputy-leader and chair of Glasgow Life David McDonald defended the event, describing it as a “technology conference” when questioned on the issue last month.

CommonSpace can reveal that a three-hour session, which is free to attend for students from “invited universities and institutions”,  will be headed up by Babcock International and the Ministry of Defence, featuring officials directly involved in the new Dreadnought class submarines which will carry the Trident warheads.

The organisers state that there are important roles in naval defence for engineers, social scientists, management experts and lawyers, which the session will aim to highlight in order to show students “the reason why you may want to join the defence community”.

Tim Hodgson, director of submarine capability at the Director Nuclear General’s office will chair the session. According to the UK Government’s website, the principal function of the department is to support the delivery of the next generation of Trident carrying submarines.

Hodgson formerly worked as head of nuclear capabilities at the MoD and as chief engineer at marine engineering, where he was directly responsible for the delivery of the Next Generation Nuclear Propulsion Plant. This covered the mechanical systems and electrical distribution within the Dreadnought submarines.

Speaking alongside him will be Will Pope of Babcock International, who is leading the design of two subsystems controlling torpedo launch for the Dreadnought submarines. In his role, he manages graduate and assistant engineers working on the Trident replacement programme.

The council responded that the organiser had confirmed the session was not about Trident. “Neither Trident nor the Trident replacement programme features at UDT,” a spokesperson said.

However, campaigners have expressed outrage at the revelation that the event will offer a recruitment opportunity for the arms industry, and have claimed that the council is glossing over its true nature.

A spokesperson for Campaign Against the Arms Trade (CAAT) Scotland said: “The city is home to world class universities, but is this really where we should be trying to attract graduates to?

“Working towards the nuclear arms race that is not only a risk to millions of lives but costs the taxpayer billions of pounds. It is clear this is why Glasgow was chosen for this arms fair and it is a black mark on the city that this is being allowed to go ahead.

“From the very beginning both the council and the event organisers have tried to whitewash this event, but it is now clear just how dangerous it is. The SNP council must drop support immediately or be tarnished by this for the foreseeable future.”

Jay Sutherland of Scotland Against Militarism, a campaign against military recruitment in schools, said the session demonstrated that the Ministry of Defence has “no shame when it comes to targeting young people, even for the most unethical of topics”.

Sutherland added: “Already they target deprived communities en masse and now they are targeting students within the sciences to get on board with the military industrial complex.

“Both issues of challenging recruitment practices and the arms industry are interlinked, that’s why Scotland Against Militarism is involved and we urge everyone to take part in the demonstration at the SEC at 10am on the 26 June.”

Glasgow City council officials have repeatedly denied that the event will feature Trident renewal, despite session descriptions which referred specifically to the next fleet of nuclear weapon carrying submarines being published on the event website.

Commonspace can also reveal details of the discussion set to take place the morning of the recruitment drive. Of the four members on the plenary discussion panel, three are directly linked to Trident.

First listed speaker David Matthews is a commodore at the Submarine Delivery Agency, which was set up specifically to manage the new fleet of nuclear weapon carrying submarines.

Commenting on the revelation of the recruitment session at the conference, Arthur West, chair of Scottish Campaign for Nuclear Disarmament (CND) added: “It is deeply depressing that as part of the Glasgow arms trade fair it appears a session on how you get a job related to supporting nuclear weapons is taking place.

“The truth is that if our country got rid of nuclear weapons and did not replace Trident it would release significant sums of money which could be used for socially useful jobs such as in health, education and developing clean forms of energy.”

Campaigners are planning a series of protests against the arms fair. The main rally at the SEC will be held on the opening day of UDT at 10am Tuesday 26 June. Activists are planning to protest all three days with a second day of action on Wednesday 27 June set to be announced in the coming days.