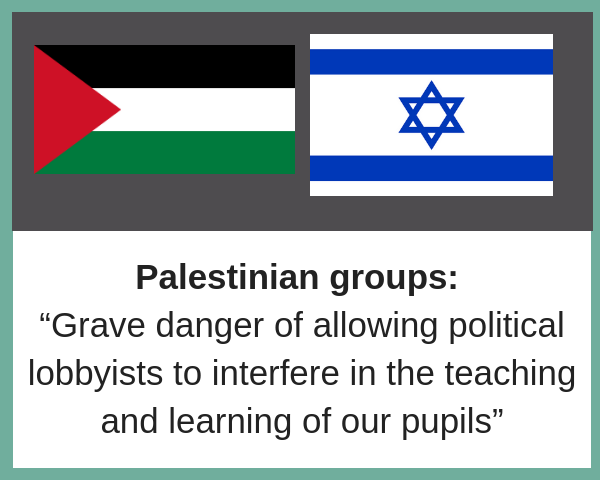 John Swinney, who is also Cabinet Secretary for Education and Skills, took the decision to remove the quality assured resources from the teaching and learning intranet system GLOW after a meeting with the Scottish Council of Jewish Communities in May last year, and ordered Education Scotland to conduct a review into the materials.

ANALYSIS: When lobbying power and the false pursuit of consensus trumps learning

Swinney had previously told Education Scotland he was in favour of the development of high quality teaching and learning resources on the issue, despite the repeated insistence of some Jewish and pro-Israeli lobby groups that any educational materials on Israel-Palestine would inevitably lead to anti-Semitism and could not be produced in a balanced way.

Education professionals, parents, students, academics, Palestinian groups and Scottish Jews for a Just Peace had indicated support for the resources, which had been signed off by Education Scotland as “quality assured” in March 2017.

Palestinian groups issued a statement criticising the “privileged access” which the Deputy First Minister has given to pro-Israeli groups during the three year process, saying that there was “no attempt to inform the other stakeholders of emerging obstacles” and warned that the resource was in “grave danger of allowing political lobbyists to interfere in the teaching and learning of our pupils.”

CommonSpace has seen Education Scotland and Scottish Government documents over a three year time period relating to the development of Israel-Palestine learning and teaching resources for Scottish schools.

The idea to develop the resources came after a North Lanarkshire school had to apologise in 2015 when P7 homework depicting Palestinians as separatist terrorists was reported in the media. Palestinian groups said the homework “demonised” Palestinians.

A subsequent meeting took place in June 2015 between Alasdair Allan MSP, who was then minister for Learning, Science and Scotland’s Languages, groups representing Palestinian communities, the now defunct Glasgow and Valley rights based learning Management group and Education Scotland, which agreed that all parties did not want a repeat of the North Lanarkshire school incident and confirmed that the newly constituted working group would now seek to “scope out” appropriate education materials.

A consultation meeting then took place in November between Education Scotland, Scottish Association of Jewish Teachers and Scottish Friends of Israel on the development of the new materials. The minutes of that meeting show SFI were opposed to the concept from the outset, saying it was “inappropriate and divisive”, would “bring anti-Semitism into the classroom”, and could “upset” Jewish and Muslim children and it was “impossible to achieve a balanced exploration”. 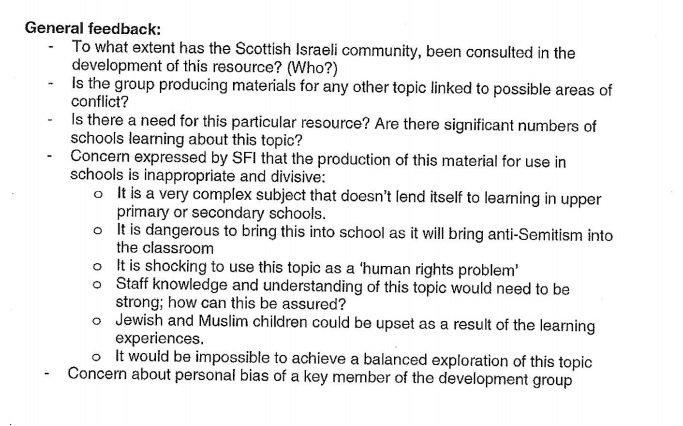 SFI went on to claim that Sadaka.ie, an organisation which has educational resources on Israel-Palestine approved for use in secondary schools in Northern Ireland and Republic of Ireland, was “anti-Israeli and anti-Semitic”

“How could materials from this organisation be used in a resource which seeks to be unbiased and balanced?” The document feedback stated.

A further meeting with Scottish Friends of Israel in January 2016 confirmed that the group were lobbying against the development of the material, including exploring legal routes to close down its development.

From February to December 2016 consultation responses were collated on the education material, showing:

Claims that the cartoon (above), which was produced by Jewish Voice for Peace and was balanced by other cartoon sketches from a more pro-Israeli narrative, was racist were rebuffed by Education Scotland, but Scottish Friends of Palestine were informed that the Deputy First Minister felt it could be “misconstrued”.

An academic review of the resource in June 2017, found that the materials were “useful and fit for purpose”.

“In all honesty we do not understand why there would be any issues with using them in schools,” the academic review stated.

In September 2017, Education Scotland had decided that any piloting of the new material following review “would only take place once we had reached consensus across all stakeholder groups”, but by May 2018 this had “proved impossible”  and they therefore decided that they “must reconsider the need for a consensus”.

“The priority now is to find a solution and to publish a set of high-quality resources which are balanced and objective to a neutral observer as soon as possible,” the email stated, adding that they were not going to “abandon” the project and remained “fully committed” to producing the education material.

A letter on 24 April 2018 from an Education Scotland official confirmed that Swinney was in favour of producing the Israel-Palestine education materials: “The Deputy First Minister is clear that there should be high-quality resources available for teachers on this important theme.”

Scottish Friends of Palestine wrote to Education Scotland on 11 August criticising the cancellation of meetings on the development of the resource as part of a “wearing down process” – of those who wanted to produce the Israel-Palestine education material.

“We view this recent action as Education Scotland and the Cabinet Secretary for Education & Skills, John Swinney, on behalf of the Scottish Government, taking further steps to renege on their commitment,” SFoP wrote.

The letter went on to warn Education Scotland that failure to produce the education materials risked the North Lanarkshire school “homework debacle” in 2015 reoccuring.

By late August, Swinney had told Education Scotland to “pause all activity on the resources”.

CommonSpace asked the Deputy First Minister why he had ordered the material to be taken down off the site and reviewed in May 2017, why he had then paused all work on this in August 2018 and whether he still believed it was important to produce education resources on Israel-Palestine.

A Scottish Government spokesperson replied: “It is important that schools have access to appropriate materials that provide the broadest possible learning experience, including about the impact of conflict.

“Any resources on a sensitive subject such as Israel and Palestine are going to attract a range of differing opinions. That is why there has been a considerable amount of work over a long period to take account of stakeholder views and ensure the materials in this case are as balanced and objective as possible before being made available.”

Hugh Humphries, secretary of Scottish Friends of Palestine, issued a statement on behalf of SFoP, the Association of Palestinian Communities Scotland and Scottish Palestiniain Forum, calling on Swinney to “deliver on the many promises made over the past three years.

They stated: “John Swinney, on behalf of the Scottish Government and Education Scotland, must deliver on the many promises made over the past three years. They owe it to the pupils and teaching staff of Scotland’s schools. While Mr Swinney continues to delay the development of a ‘balanced’ national resource, we now find that well-funded US based groups are once again targeting Scottish schools with their own unbalanced narrative.

“Unfortunately, the privileged access accorded to political lobby groups at government level during this period has the potential for corrupting the Resource. We cannot allow the education of our pupils to be compromised by exposure flawed resources. A first step is the acceptance by Mr Swinney that the relevant academic institutions within Scotland have a role to play in determining and defining his notion of ‘balance’. And this should be acknowledged and acted upon as a matter of urgency.”

Humphries went on to tell CommonSpace that he believed the “privileged access” accorded pro-Israel left the education resource “in grave danger” of being compromised and “allowing political lobbyists to interfere in the teaching and learning of our pupils.”

He added: “The resource’s writing group, set up in 2015, was guided by an established framework, as was the consultation on the resource at the end of the following year. The danger signs were present when the pro-Israel stakeholders treated both this framework and the resource itself with utter contempt and were then allowed to blaze a trail into the offices of Education Scotland and the Deputy First Minister John Swinney. Not only was there then a failure to ensure the integrity of the consultation framework, but there was no attempt to voluntarily inform the other stakeholders of the emerging obstacles to a resource which had once been ‘quality assured’ by Education Scotland.

“As we approach the end of 2018, questions such as why the promised review and pilot of the Resource, made well over 15 months ago, have failed to materialise remain unanswered.”

CommonSpace had contacted the Scottish Council for Jewish Communities, Scottish Friends of Israel and Scottish Jews for a Just Peace were contacted for comment but had not responded by time of publication.