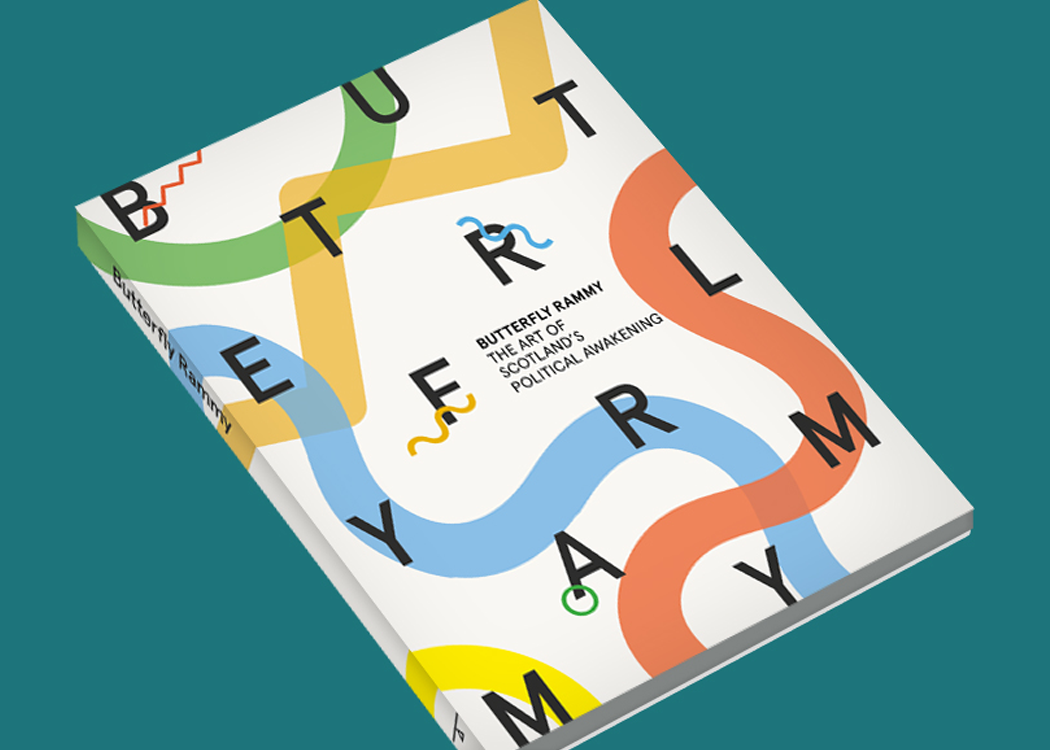 THE BUTTERFLY RAMMY book is an illustrated accompaniment to an ambitious series of shows which will take place between 7 and 30 August during the Edinburgh festival, with a preview night in Glasgow on Thursday 6 August.

My first question, like most people’s when they hear the phrase, was ‘what is a Butterfly Rammy?’

It turns out a Butterfly Rammy is a metaphor for the chaotic, impassioned, colourful energy of the independence movement, the Scots word ‘rammy’ symbolising the clashing of political ideas and visions, in a less-than-orderly fashion, but being transformed, like a caterpillar shedding its skin, into something beautiful and hopeful.

Organised by Common Weal, which describes itself as a “think and do tank”, the Butterfly Rammy has “commissioned 18 artists and 18 writers to reflect on what happened, following the arc of events through 18 Scots words which capture their spirit.”

Each word is used as a jumping off point to ask questions about the impact that the independence movement has had on Scottish society, as part of a “cultural project for this year’s Edinburgh Fringe Festival exploring politics and the arts in Scotland”.

The book itself takes a journey through each of the 18 words, with one writer and one visual artist commissioned for each theme, offering a definition of each word and some synonyms, then linking the word explicitly to a snapshot of time during the independence campaign.

The writers respond in prose and in poetry, with personal essays, irreverent poems about pigeons being karate-chopped, analysis of lessons learned, and pieces setting out hopes for the future.

Finally, a question is posed relating to the referendum, and where to go from here.

The writers respond in prose and in poetry, with personal essays, irreverent poems about pigeons being karate-chopped, analysis of lessons learned, and pieces setting out hopes for the future.

The illustrations are a mixture of abstract photography and drawings and specially commissioned illustrations. As well as the work of the 18 different artists, the Documenting Yes project also contributed photographs of the campaign from their archives to each chapter of the book.

Some of the themes covered are whether or not the independence campaign was nationalist, or perhaps even anti-nationalist; the role of identity and place; the impenetrability of contemporary political discourse; anger as a driving force; feelings of community; the extent to which Scotland is suffering an identity crisis; the role of old media; our collective coping mechanisms in the wake of referendum defeat; possible reasons for The Bottling; the inevitability of the break up of the British state; and others besides.

Intended as a companion to the series of fringe shows, this book will be of interest to those keen for an insight into the artistic and cultural side of indyref, and the way artists have responded to the campaign, and to questions about where to go now.

Copies will be on sale at all showings of the Butterfly Rammy, and are available to order here .