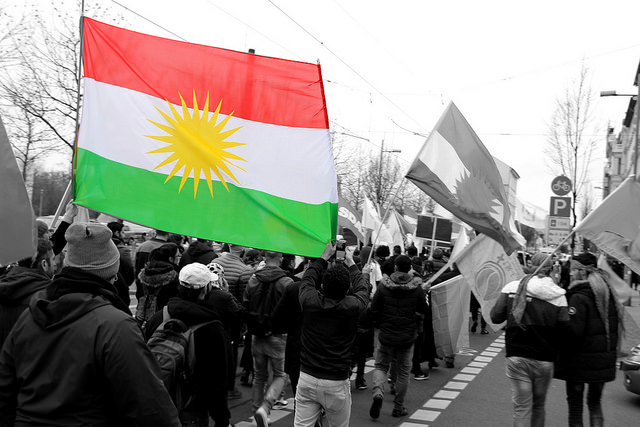 101 YEARS AGO, in the midst of a world war, the likes of which had never been seen before, representatives of France and the UK met in secret, their eyes on the Middle Eastern prize.

They drew up an agreement that carved up this oil rich and strategically important land in such a manner that they could both retain their spheres of influence.

Agreed upon by Russia, the Sykes-Picot treaty was signed and, with lines drawn bluntly across a map, Kurdish dreams of a nation state were dismissed out of hand.

101 years later, and the British are still trying to make their influence felt.

However, following the Bolshevik Revolution of 1917, agreements signed by Tsarist Russia concerning the carve up of Iran and the Ottoman Empire were no longer recognised, and it was subsequently replaced the Treaty of Sevres. Yet more turbulent times were afoot; the Turkish war of independence broke out and it was never implemented. Instead, in 1923, the Treaty of Lausanne gave international recognition to the Turkish state, and divided the Kurdish territory between Iraq, Iran, Syria, and Turkey.

In the 143 articles that made up the treaty, the Kurds didn’t warrant a single mention.

101 years later, and the British are still trying to make their influence felt. The foreign secretary has declared that the UK does not support the recent Kurdish independence referendum. That’s right, Boris, how dare they demand a vote on the future of their country?

But only three years ago, when discussing the onslaught of Daesh on the Kurdish people, he wrote in The Telegraph: “Yes, we have got it wrong before; and yes, we cannot do everything. But that doesn’t mean we should collapse into passivity and quietism in the face of manifest evil. These people need our help.”

Help does not just come in the form of arms, airstrikes, and appreciative statements in national newspapers. If the UK truly feels the need to right the wrongs of the past, if the British government truly believes in the right of self-determination, as it professes to with Brexit, then here is a golden opportunity.

If the UK truly feels the need to right the wrongs of the past, if the British government truly believes in the right of self-determination, as it professes to with Brexit, then here is a golden opportunity.

Rather than condemning the referendum for being held at the wrong time (in the past 101 years, when was there ever a right one?), it could show some support – support to move forwards in a stable, peaceful and democratic way. Or at the very least, it could refrain from condemning it.

Rather than just as a selfish means of enabling the Kurds to maintain the front line in the fight against terrorism, or forming good relations with a region that has the “sixth largest oil deposits in the world”, UK support for the Kurds could be an opportunity to right an injustice that has caused 101 years of misery and strife.

It’s not just the UK and US that have been shaking their heads. The Kurds’ neighbours in Iran and Turkey have been keen to show their displeasure. Turkey is a country in which, for many years, it was illegal to utter the word Kurd, let alone speak the language; a country in which some educated people still refer to Eastern Turks rather than acknowledge the separate identity of Kurds.

With characteristic tact and restraint, President Erdoğan threatened to starve Iraq’s Kurds, and said that military action was also on the table. A sad side note to this story, is that not so long ago, Erdoğan was seen as a beacon of hope for peace between Turks and Kurds. But sadly, the need to fire up fierce nationalism and fear in the face of poor polling at the 2015 general election meant that this couldn’t last.

Violence once again flared up between the Turkish state and the Kurdistan Workers Party (better known as the PKK) and by the time the snap election was called just a few months later, anti-Kurdish sentiment was rife.

UK support for the Kurds could be an opportunity to right an injustice that has caused 101 years of misery and strife.

In Scotland, recognising reflections of their own struggle, politicians and activists have been outspoken in their support for the Catalan independence referendum, with a cross-party group of MSPs calling on the Spanish and Catalan governments to “work together to allow the people to decide their own future”.

Yet, apart from Alyn Smith MEP’s assertion that suppression of democratic self-determination can only incentivise unrest, there has been little solidarity expressed with the Kurdish people.

The UK’s reason for not supporting the referendum suggests that it detracts from the important fight against Daesh. While there is some truth in that, the Kurds themselves, who have been at the front of this fight since the beginning, believe that their important role in this fight gives them reason to force the issue now.

No one ever took an interest in the Kurds before, so why should they trust them at an unknown time in the future when peace returns to the region? Who can blame them for taking this opportunity to use their leverage for their own long-sought ends?

That the UK can march so resolutely down this blind alley on the slim pickings of 51.89 per cent, while shaking its head and tutting at the Kurds for simply asking to be given a chance, beggars belief.

On 25 September, 72.61 per cent of those eligible to vote in the Kurdish independence referendum turned out at the polling stations. The fact that 92 per cent of the 3.3 million Kurds and non-Kurds who turned out, voted in favour of independence, only serves to highlight the (almost) laughable comparative indecision of Brexit.

That the UK can march so resolutely down this blind alley on the slim pickings of 51.89 per cent, while shaking its head and tutting at the Kurds for simply asking to be given a chance, beggars belief.

Or rather, it should. But 101 years of history tells us to expect otherwise.