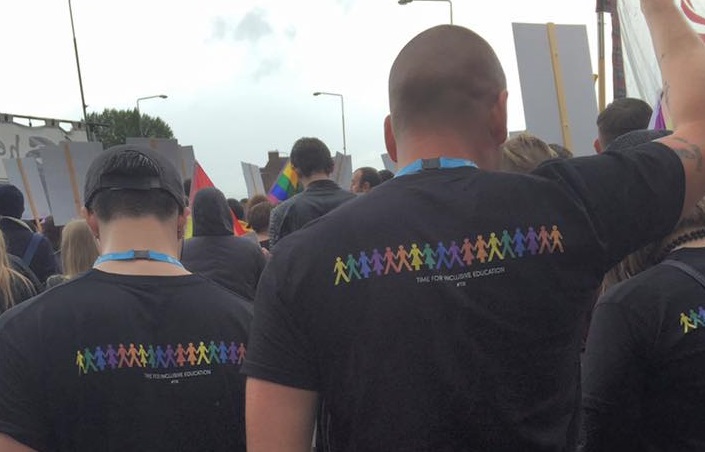 AS the next Scottish independence referendum firmly took centre stage at last weekend’s SNP Conference, you would be forgiven if you missed the motion that went through on Saturday morning.

The SNP Youth brought forward a motion on the Time for Inclusive Education Campaign. We passed a similar motion this time last year at SNP Spring conference 2016, however this year we went one step further by  committing the party to the Tie Campaign’s five-point pledge.

The speakers that took to the stage in favour of the motion are a testament to how much this change is needed within our schools. The seconder of the motion and our political education officer, Jordan Linden, told of the personal attacks he faced at school.

The Tie Campaign itself is demonstrative of the immense success that can come from effective grassroots campaigning.

Josh Mennie, who has recently just come out, told conference how he wished he never had to. Hannah Bardell MP congratulated those that had gone before on coming out while still in education, something which she had not been able to do.

Conference also heard from Gaela Hanlon who again raised the importance of equality for all gender identities. All the stories and personal testimonies echoed the story that Jordan Daly of the Tie campaign himself tells.

And these stories punctuated the weekend during the internal equality sessions. These sections saw women and minority groups pushed to the forefront of our conference, highlighting just how far we have come as a party but with a knowing look to the future of just how far we have yet to go.

And we do have a long way to go yet. Within our schools, homophobic and transphobic language is rife. Tie statistics state that 90 per cent of young LGBTI people experience homophobia, biphobia or transphobia at school. If you haven’t experienced it yourself or been a perpetrator of it, you probably know someone who has.

Tie has gone from strength to strength. It has achieved cross party support, extensive media coverage and unprecedented momentum in its mission to create a truly inclusive education for all.

As each young person took to the stage to reiterate the need for this change, there was an undeniable strength in the consensus. Each speaker was driven by their shared experience that this change is needed. The passing of the motion highlighted just how effective young people can be at instigating change and pushing for their own policies.

This couldn’t be more important as we as a country start to think again about what an independent Scotland will look like.

The Tie Campaign itself is demonstrative of the immense success that can come from effective grassroots campaigning. In the last year, Tie has gone from strength to strength. It has achieved cross party support, extensive media coverage and unprecedented momentum in its mission to create a truly inclusive education for all.

Every one of the campaign’s achievements is down to the two founders; Jordan, a student, and Liam, a tanker driver. Between the two of them they have put inclusive education on the agenda and got everyone talking about issues that, before now, were seen as problematic.

They have conducted research and released two publications while continuing to offer completely free teacher training and school assemblies. All this has been achieved on a shoestring budget with no premises.

They have conducted research and released two publications while continuing to offer completely free teacher training and school assemblies. All this has been achieved on a shoestring budget with no premises.

It certainly raises questions on the defendability of charities that have failed to make as much headway on these issues: charities that still insist on charging for services which act as a huge barrier for schools or willing teachers. The same charities that have million pound turnovers and headquarters in prime real estate locations.

Charities are vital public service providers in many sectors, however the dependence on governmental funding can also bring with it a reluctance to whip up intense lobbying on key issues due to the worry of reprisals. But when charities and large organisations which have a remit over these issues are being outperformed by two young men with a shared belief in equality, surely there has to be some deep introspection as to how we approach this.