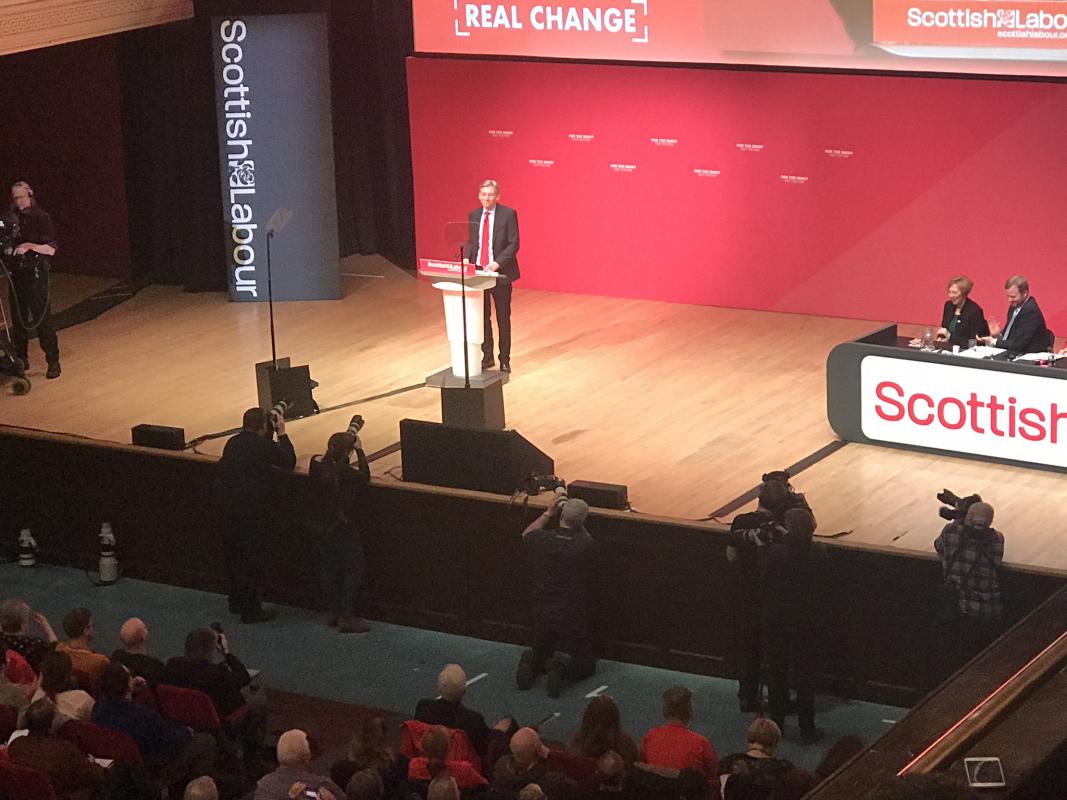 IN A KEYNOTE SPEECH to Scottish Labour conference, Richard Leonard committed that under his leadership Scottish Labour would not sign any new private finance deals for public sector contracts,  promising to end the search for market solutions and keep projects in public hands.

Richard Leonard called a halt to the “racking up” of extortionate Labour-era private finance initiative (PFI) debts that are pushing public services to the brink. In an earlier speech on the issue, Richard Leonard said he would pull out of costly NHS contracts.

Leonard, speaking at the party’s conference for the first time as party leader, said: “Here in Tayside, the thirteen million pounds that is spent on the two private finance contracts for mental health facilities is simply not delivering for those people who need them.

“The Carseview contract, for example, has another nine years to run and is estimated to cost three million pounds each year.

“The contract for mental health facilities at the Murray Royal and Stracathro hospitals is expected to pay out three hundred million pounds over the next twenty-five years.

“From speaking to campaigners, they agree that there’s no time to lose. This is a matter of life or death.”

Leonard added: “At a time when the public sector is facing so many budget cuts it is unjust that private companies through PFI and the SNP’s NPD and Hubco schemes are raking off millions in profits.

“When the public sector is facing so many budget cuts it is unjust that private companies are raking off millions in profits.”  Scottish Labour leader Richard Leonard

“These contracts do not provide value for money. So, we will go further and also explore how to bring back in-house existing contracts, and we will develop alternative public-sector models for funding saving the public money and improving services and working conditions.”

As part of the announcement that he would bring in a “Mary Barbour law” – legislation that would introduce rent controls – Leonard said his plan to tackle “rip-off rents and agency fees will create better homes for bringing up our children”.

At the UK Labour party conference in Brighton last year, Jeremy Corbyn announced he would also bring in rent controls as part of a “radical programme of action” on housing.

Last week, an independent report commissioned by Shelter Scotland, the Scottish Federation of Housing Associations (SFHA) and the Human Rights Commission Scotland found that Scotland is on course to achieve its pledge of delivering the biggest boom in social housing since the 1970s.

Housing remained the over-riding theme of Leonard’s speech when he said the party would use Scottish local government pension funds as a way to finance investment in public housing: “Pension funds seek low-risk investments with a reasonable return, making them perfect for long-term finance projects.

“So investment in public housing is a logical next step.”

New polling from the Scottish Greens recently found that almost three-quarters of Scots do not want the multi-million pound MSP pension pot to be used to invest in weapons, tobacco and dirty fuels.

READ MORE: Scotland on target to deliver biggest boom in social housing since the 1970s

Also, last December, both SNP Westminster leader Ian Blackford and Jeremy Corbyn have joined hundreds of MP’s and former MPs in campaigning for an end to investment from Westminster’s pension funds in fossil fuels.

It is believed that many other pension funds are invested unethically and party insiders hoped that proposals to find ways to invest pensions for social good would be welcomed.