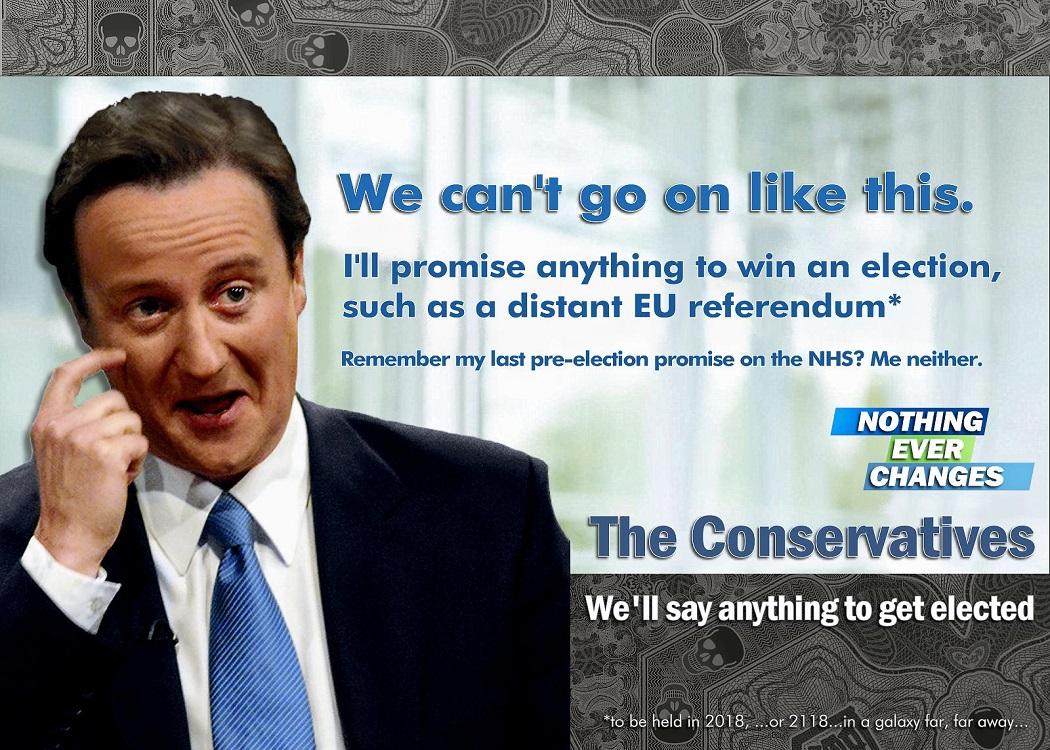 OVER in Ireland today the highly contentious issue of being allowed to marry who you want is being put to the vote. Quite how the state should have a say in who you decide to spend your life with is entirely another debate.

It does beg another question, however, concerning the use of a referendum to decide on how a government should formulate policy. Isn’t that supposed to be in the manifesto allowing you to make an informed choice when you put your mark on the ballot paper?

It appears, not just over the water, but on mainland Britain, that if a subject is too delicate – that is, it will lose you as many votes as it gains you, then it’s best avoided, and left up to the people to decide later in a referendum, giving the impression that the people have a Government that listens.

If a subject is too delicate – that is, it will lose you as many votes as it gains you, then it’s best avoided, and left up to the people to decide later in a referendum.

We’ve had the Scottish independence vote, which led to the Union remaining, but the dismissal north of the border of any MP found to have supported what ultimately turned out to be a rash of broken promises six months later in the UK elections.

The referendum may not have delivered independence, but it alerted people to the fickleness of politicians, and allowed the electorate to take swift and decisive action.

The next referendum will concern the membership of Britain in the European Union. ‘Better together’ seemingly not applicable when it concerns a community that cannot be overridden by a compliant London media.

David Cameron has refused to fully outline his position in the debate, but has pandered to the more extreme right of his party – if such a position is possible – and conceded a referendum, meaning that he didn’t have to make a policy decision, and could avoid debate on the subject.

Instead, the right can use the same media scare tactics in the run up to a plebiscite that were successfully employed in the Scottish vote. Did he do that to be sure of a victory? Did he do that as a concession to the far right to prevent a pre-election split in the party, buying their silence until a second term was achieved?

It looks as though the Conservatives will play the British bulldog Nationalist card against Europe, yet condemning the same spirit of identity within the Scots, and they can’t see the irony.

It doesn’t matter why, it matters that he’s done it. Quietly and effectively.

Deep down, it’s hard to separate the Conservative psyche from the old imperialist outlook on the rest of the world. It looks as though they will play the British bulldog Nationalist card against Europe, yet condemning the same spirit of identity within the Scots, and they can’t see the irony.

There’s talk of regional assemblies throughout the midlands and north of England, as the locals begin to realise that although the Scots can break away, they are stuck with with London, which has absolutely no interest in what happens outside the M25 ring road.

By encouraging a breakaway from Europe, they will appeal to the base nature of being British and painting the Europeans – especially the Germans – as the real enemy.

Immigrants, always a good card to play when you need a scapegoat, will bear the brunt of the next onslaught, which will deflect from the Home Counties view that anyone outside the south-east is pretty much a Johnny Foreigner anyway, and has the same unhygienic habits and is incapable of knowing what’s good for them.

Conservatives, by definition, want to continue the status quo.

The Labour Party has gone now, having forgotten why it was there in the first place, and the old days of the Empire are returning.

It was rudely interrupted by a powerful Labour Party which created the NHS, nationalised important industries and generally improved the stock of the working man.

The Labour Party has gone now, having forgotten why it was there in the first place, and the old days of the Empire are returning. Business is back in private hands, the NHS is far from secure, and the working man has lost the sense of community that made him so powerful.

You know those new houses that are being built? They’ll have chimneys to provide employment for the under fives, keeping them busy until it’s time to start school, freeing up the parents to work extra hours to pay the bills.

And by using the referendum tactic, they’ll tell us that it’s what we really wanted all along.