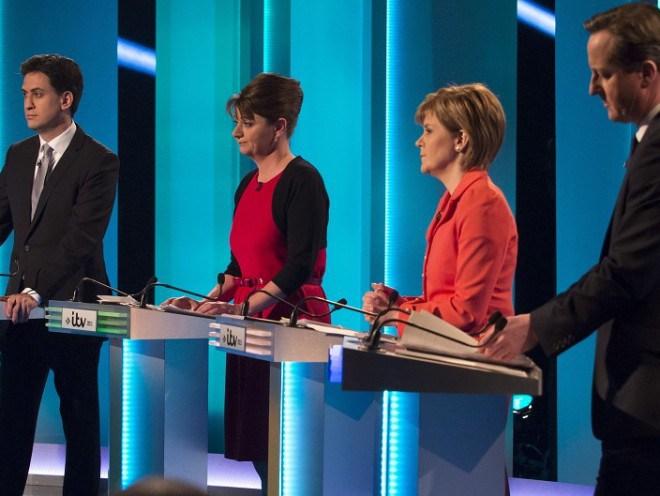 Nicola Sturgeon has set the cat amongst the pigeons, writes CommonSpace columnist Richard McGinley, and the old boys network is running scared

There weren’t any surprises.

David Cameron, Conservative leader, told us that his plan was working and we needed more of the same to get Britain back on its feet. Always uncomfortable when he can’t immediately walk away from the camera when he’s said his bit, Cameron struggled along telling us we were all in the doggy do and he was going to get us out of it by allowing us to continue wading in it for a while, as he piles more poo in our paths.

Ed Miliband, who wants to be prime minister when he grows up, spoke fairly well, but spoiled the effect by gazing lovingly into the camera every time he fell silent, and it wouldn’t surprise me if one or two people felt that his stare was a little creepy.

Ed Miliband, who wants to be prime minister when he grows up, spoke fairly well, but spoiled the effect by gazing lovingly into the camera every time he fell silent.

I just felt he was more like a television in standby mode. Poor Ed. He’d obviously forgotten the golden rule of television – always treat each camera as though it’s watching, and every microphone as though it’s recording. That way, you won’t be caught looking or sounding stupid.

Ed has improved since he came on the scene, but you get the feeling that if Labour had anyone else, he’d be out without hesitation.

Nick Clegg, his credibility long since shot to pieces, started by apologising for making mistakes, and then went on to passionately plea for balance. Ironic, really, for someone who has fallen on his arse so many times. He’ll be off to chair some private health company by the end of May.

Then there was man of the people Nigel Farage. This time, he didn’t have his half finished pint in his hand, but it was becoming clear as the evening went on that he’d had a couple of refreshments beforehand.

As the arguments went against him, he used the simple tactic of trying to shout louder than anyone else, in the manner of the crass drunk in the pub who is intent on making everyone look at him and listen to his stories. Believe me, I’ve a fair idea of how that works.

With his eyes bulging, presumably to get as far away from his mind as possible, Farage came across as exactly what he is. A dangerous bigot appealing to the lowest common denominator. When he referred to the “canny Scots” negotiating a better deal than the Welsh, and concluding that “less money needs to be sent over Hadrians Wall” you wanted to slap him. With a shovel.

Nigel Farage used the simple tactic of trying to shout louder than anyone else, in the manner of the crass drunk in the pub who is intent on making everyone listen to his stories.

We also heard from a very sensible lady who was in charge of the Green Party. Natalie Bennet, a little nervous at first, recovered and scored a few points but is still going to find it difficult to persuade people that the planet is dying and it needs saving.

We all know it is, but the action required is so drastic, such as immediately reducing and reversing population growth, that no-one wants to face it.

Leanne Wood, representing the Welsh nationalists Plaid Cymru, won people over with her relaxed style. However, the main party leaders confused her mild tone with weakness, although she delivered a few knockouts of her own.

If she had painted her face with a blue and white saltire and cut everyone else in two with a claymore she couldn’t have inflicted more damage on the mainstream leaders.

Farage was dismissed with a single comment: “Theres nothing he won’t try to blame on foreigners.”

Which, it appeared included Scots.

After the opening exchange, Farage steered clear of Sturgeon, having met someone who knows that when you shout, it’s because you’ve lost the argument.

If Nicola Sturgeon had painted her face with a blue and white saltire and cut everyone else in two with a claymore she couldn’t have inflicted more damage on the mainstream leaders.

Cameron and Miliband were visibly rattled when Sturgeon pointed out that they had both agreed on a further round of austerity measures – this time PS30bn of cuts – to which both men flapped around a bit, alerting security silently to ask for this troublesome woman to be ejected.

Unfortuantely, this backfired and the heavies got a bit confused when another troublesome woman had a go at David Cameron from the audience, and they chucked her out instead.

Sturgeon didn’t just attack the policies of the mainstream parties. She outlined that the Nats would invest sensibly, and prudently, to help grow the economy, which offered hope to a population wondering how a government can double the national debt, despite printing more money and cutting back on vital services and amenities.

She did it quietly, effectively and not only sounded like a woman with a plan, she looked like one.

Image in these days of television and other visual media is crucial. It’s why all three mainstream leaders look as though they’ve been churned out by a factory specialising in smart, clean cut young men – just insert a personality chip and you’ve a leader who would look more at home in your living room telling you why his windows are better than anyone else’s.

Cameron and Miliband flapped around a bit, alerting security silently to ask for this troublesome woman named Sturgeon to be ejected.

Sturgeon appeared business-like and smart, but wore bright colours, almost unheard of these days in politics. It’s part of why they are afraid of her. She knows how to play the game.

Avoiding the standard soundbites, she spoke calmly and rationally, never raising her voice, never waving her arms around, just simply turning toward whoever she was speaking to, and then facing the audience, so as to include them in the debate rather than simply preaching to them.

The others preferred to talk to the camera, which made them look more like the fellow who comes on at the end of an advert asking you to ring this number.

After the debate, the general consensus down south was that there was no clear winner, despite Skybet paying out on Nicola Sturgeon within around half an hour. Bookies are rarely wrong. It’s why they live in big houses and their customers rent flats above a shop.

Over on the BBC’s politician-based version of the Jeremy Kyle show, the panellists – among them Michael Gove, Danny Alexander and Andy Burnham – were in a state of panic.

To quote Sturgeon, it’s time to break the Westminster old boys network, and they know she can.

Despite not having any representation on the show, the SNP dominated the discussion. That’s despite having the third largest membership of any party in the UK.

A membership which grew by another couple of thousand last night. To quote Sturgeon, it’s time to break the Westminster old boys network, and they know she can.

One thing that I noticed, as someone watching from over the Wall, was the amount of people on social media asking if they could vote for Nicola.

In fact, that – or a variation of it – was the most frequently asked question on the Twitter network last night. The establishment, as we will see over the next few days, is running scared. And it should be.